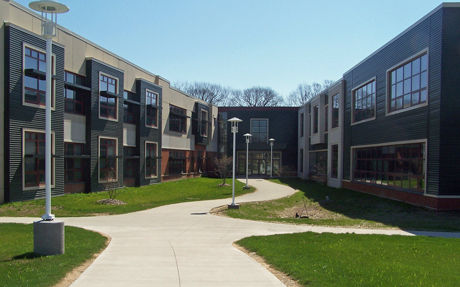 Ohio leads the nation in energy-efficient LEED schools, saving millions of dollars on energy costs statewide. And cash-strapped districts are hoping voters appreciate those financial benefits as they make their cases for levy approvals.

The state’s top rank is in large part because of the Ohio School Facilities Commission’s (OSFC) adoption of the Leadership in Energy and Environmental Design for Schools rating program. The program, developed by the U.S. Green Building Council, applies to new construction or major renovations for schools from kindergarten through twelfth grade.

“Ohio is leading the nation in our green school efforts. We’re even beating California,” says Lisa Laney, green schools program director for OSFC. As of April 2013, Ohio had 345 schools either certified or registered for certification, compared to just 201 in California, according to commission and USGBC data.

The law doesn’t require all new school projects to go through OSFC. For those that do, projects get co-funding from the state, and OSFC boosts the budget 3 percent to cover LEED certification. State and local shares vary, based on a funding formula that considers local property values.

“Those green schools average about a third less energy use in wattage than traditional schools,” notes Rob Delane, deputy executive director at the Ohio School Boards Association. Depending on a school’s size, savings “could be upwards of $100,000 per year.”

Cloverleaf Local Schools in Medina County, Ohio, knows all about needing to save money. Cloverleaf is one of six Ohio school districts currently in an official state of Fiscal Emergency, meaning that its five-year forecast shows a budget deficit. The 119-square-mile school district has already made $4 million in budget cuts.

Among other cost-cutting measures, Cloverleaf closed and combined three schools into a new 1,200-student elementary school. Some savings come from consolidating operations, like cafeterias. The school’s LEED design provides more savings for lighting, heating, and other energy uses.

“It shows our taxpayers that we are energy conscious, that we are green, and that we believe in stretching our taxpayer dollars as far as we possibly can,” says superintendent Daryl Kubilus.

Such features are another advantage for Ohio’s LEED schools, says Laney. “The energy efficiencies that we’re putting into these buildings now will benefit not only the taxpayers of Ohio—they benefit the children across Ohio. As a side benefit, the buildings are healthier places to live and learn every day.”

Projects pay for themselves

Building a new school isn’t the only way that energy efficiency lets Ohio schools do more with less. OSFC’s Energy Conservation Program—also called the House Bill 264 program—lets districts borrow funds for energy efficiency projects without prior voter approval. Districts pay back the loans with the projects’ savings over a 15-year period.

Contractors guarantee that energy efficiency projects will save money. OSFC also reviews the calculations and engineering before projects go ahead.

“The main point for our school district was the energy savings paying for the upgrades, and it being guaranteed,” says Kubilus. “We thought that this would be a good way not only to be more efficient, but to show our taxpayers that we were being good stewards of their money.”

Kubilus hopes voters appreciate that when they vote on May 7 for the district’s $7.9 million, 10-year levy. The district would have had to ask voters for even more money if it didn’t have the savings from the energy efficiency upgrades. Plus, neither the levy nor any other new tax money will pay for those $1.2 million worth of projects. Cloverleaf will pay off its loan with savings on energy bills, and it will save even more on top of that.

While the HB 264 program has existed since 1985, it’s become especially important in the last five years.

“We’ve run through a terrible recession, and school districts have been cut far more than they’ve ever been cut before,” says Delane.

So far, over 550 school districts have taken advantage of the HB 264 program. Expected savings from projects approved in 2011 and 2012 exceed $14.6 million per year.

The older the school, the more likely projects are to produce large savings and get certification under the program.

“A lot of schools were built right after World War II, and those buildings are not energy efficient,” says Delane.

Lighting typically accounts for 26 percent of a school’s electric bill, according to the United States Environmental Protection Agency’s Energy Star Program. Improvements to exterior and interior lighting might cost between $250,000 and $500,000. Yet those changes can produce combined savings of $25,000 to $50,000 per year, reports OSFC. The improvements pay for themselves in five to ten years, and then the savings continue.

Insulation, boiler upgrades, caulking, kitchen upgrades, cooler/freezer temperature controls, and water-efficient faucets are just a few other improvements whose savings can pay for themselves in 15 years or less. Even a vending machine occupancy sensor for $300 to $500 can save $100 to $150 per year—enough for a classroom set of paperback books.

Centerburg opted to install solar panels at its high school and elementary school, which can provide up to 80 percent of the buildings’ power. The district paid no upfront costs for the arrays.

Centerburg’s solar power comes from a deal the district made with Solar Planet, a Columbus, Ohio company. Solar Planet installed arrays at its own cost and holds title to them. In turn, the district buys the system’s electricity from Solar Planet.

“We’re buying it at about 26 percent less than what we would be paying a commercial vendor, so it’s a pretty decent savings,” says Centerburg superintendent Michael Hebenthal. He estimates the current savings at $40,000 to $50,000 per year. “That’s keeping a teacher in the classroom.”

Under the contract’s depreciation schedule, the district could decide to purchase the arrays after 13 years or so. If that happens, the district wouldn’t have to pay anyone for the arrays’ output. Savings could then jump to $100,000 to $200,000 annually.

“What we’ve got to do is look down the road—make some smart decisions now that will pay off down the road,” says Hebenthal. He appreciates that Solar Planet’s business helps schools like his. “It’s a win-win for all of us.”

Several other companies provide solar power under similar models. In other cases, a third-party investor can come in, buy equipment, and work out an arrangement with a school, says Alan Lee at EcoSolargy Inc., a nationwide company that did not work on the Centerburg project. The benefit for private companies is that they can take advantage of tax credits that schools and other non-profit entities can’t use.

The energy-saving strategies can provide other benefits. Contractors just poured the foundation for a new solar energy lab that Solar Planet is providing for Centerburg High School. Meanwhile, everyone in the area can see the district’s solar arrays and track their energy production on the district’s website.

Ohio’s LEED schools also tie energy efficiency and other environmental programs into classroom teaching. In fact, curriculum tie-ins are part of the LEED criteria. In effect, the school itself becomes a tool for teaching science and social studies.

“The kids are really excited about the green initiative,” says Laney.

Of course, every dollar saved on energy is a dollar that districts can use for teachers, classroom materials, or other purposes. “That money is sorely needed and could go into other areas,” says Delane.

Students, teachers, and staff enjoy a better environment at energy efficient schools too. Kubilus says the light quality at Cloverleaf’s buildings is much clearer after the energy efficiency upgrades. The new boilers provide more comfort while taking up significantly less space.

“The fact that we’re getting better output, better quality, at a lower price, it’s a win-win situation.”