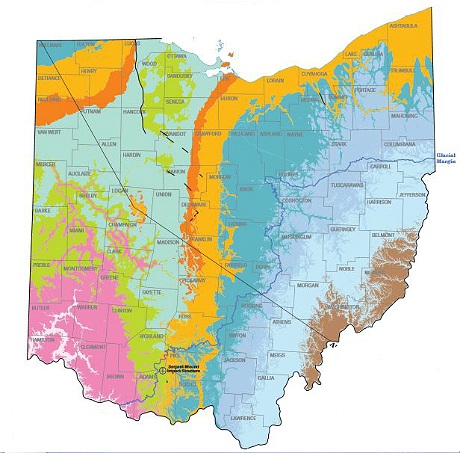 A map of Ohio's bedrock geology. (via Ohio DNR)

More than a year after a string of earthquakes prompted Ohio to enact tougher rules on disposal wells for fracking wastewater, researchers are still working to understand the extent of the risk.

Seismologists say the state has generally done a good job mapping and monitoring its seismic activity, but there is still much work to come.

The link between the wells and earthquakes has strengthened in recent years, with Ohio regulators connecting as many as a dozen man-made temblors to the injection of gas-drilling wastewater deep into the earth. In response, officials have implemented new rules designed to adequately prepare parts of the state for future drilling activity.

The new policies determine the strain wastewater injection puts on fault lines. With the region’s financial future so heavily reliant on fracking, Ohio is also attempting to better understand the network of geological faults that encompass this underground economic boon, and the potential danger they represent.

Northeast Ohio sits atop the resource-rich Marcellus Shale geological formation, estimated to be the second largest natural gas find in the world. Although earthquakes are not thought to be directly related to fracking itself, geologists say disposal of the by-products dredged up in the drilling process led to a series of earthquakes in Youngstown in 2011, prompting the state to impose tougher restrictions on the practice.

Ohio can now order pre-drilling seismicity tests to identify the volume and pressure of wastewater fluids that can be injected. Once the well is put into operation, the state Division of Oil and Gas Resources Management, a division of the Ohio Department of Natural Resources (ODNR), will monitor it and shut it down if need be.

“The precise locations of naturally-occurring smaller faults are open to interpretation,”  Worstall said. “But if there is a worry about the possibility of seismic activity, we can deploy monitoring equipment in the field.”

ODNR currently has two real-time seismic monitoring stations in the Ohio towns of Marietta and North Lima, both of which host injection well sites. A third station is scheduled for Youngstown.

ODNR’s work is supported by the U.S. Geological Survey (USGS) as well as The Ohio Seismic Network (OhioSeis), consisting of 29 cooperative, volunteer-operated seismic stations at colleges, universities and other institutions across the state. From March 2011 to March 2013, 26 earthquakes were recorded in Northeast Ohio, most of them at a magnitude of 2.5 or less (a quake at a magnitude of 2.5 is generally the smallest felt by people, according to USGS).

A 4.0-magnitude quake centered in Youngstown on New Year’s Eve 2011 was felt as far away as western Pennsylvania and Ontario, Canada. Damage from the temblor was minor, but the incident led state officials to shut down the injection well owned by Northstar Disposal Services LLC, a site close to the earthquake’s epicenter.

The quake also helped change the rules surrounding the placement of new wells. In July 2012, Gov. John Kasich signed off on an emergency amendment of the Ohio Administrative Code. The amendment outlined new regulations for all underground injection control facilities, including giving ODNR “authority to promulgate rules regarding the injection into wells of brine and other waste substances obtained from or produced in connection with oil and gas drilling, exploration or production.”

Kasich also called for geological investigation of potential faulting within the immediate vicinity of a proposed injection well location, and a maximum allowable injection pressure based upon data obtained throughout the permitting period.

Oil and gas companies targeting the region for drilling “have been very cooperative during this process,” said Worstall.

Ohio may not be on a major tectonic boundary similar to California’s San Andreas Fault, but large earthquakes can occur away from these larger boundaries, he noted. Dick pointed to the series of 7.5-magnitude quakes that jolted Missouri in 1811 and 1812.

“History has taught us lessons,” he said. “It’s wise to monitor all ground motions to help prepare us for what may come.”

Ohio has done an admirable job in mapping its fault lines, Dick believes. The geography of Ohio consists of sedimentary rock sitting on layers of igneous and metamorphic rock called the Precambrian basement. There is a growing awareness among geologists of the utility of these structures in deciphering tectonic episodes, said the department head.

In Ohio, the movement of fault lines is ordinarily so small it can be difficult to pin down. Current imaging technology does not allow for proper charting of small breaks in the rock, particularly when they’re at great depth.

“We have to rely on earthquakes for a fault to say to the world, ‘Hey, I’m here,'” said Dick. “Otherwise, current seismic imaging is like looking at the moon and hoping to see the flag where the lunar module landed.”

These difficulties have not stopped ODNR and its partners from monitoring possible temblor activity around injection wells, said gas division deputy chief Worstall. Whether the result of natural causes or wastewater disposal, the state will attempt to understand what’s happening beneath the crust with as much exactness as possible.

“We’re still at the preliminary stages of these investigations,” said Worstall. “We expect to get some good, valuable information.”

Douglas J. Guth is an Ohio-based freelance writer who often writes about the intersection between business and technology.