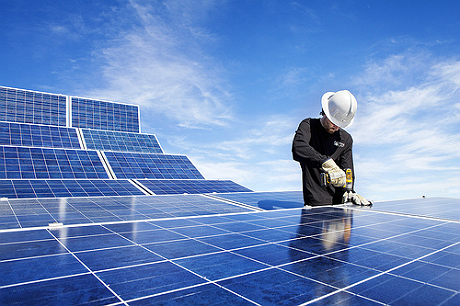 A worker installs solar panels at the Northern Alberta Institute of Technology in 2012. (Photo by NAIT via Creative Commons)

For many people, checking out online reviews is a standard step before selecting a restaurant, hotel, spa, mechanic, even a hospital or place to buy a pet.

The sprawling review website Yelp has been one of the main places where people looking to install solar systems vet or search for companies; and many solar companies have felt compelled to list their services there.

But the founders of SolarReviews, launched in November, think they can offer a more specialized and more valuable option, with reviews of solar products and services in a variety of categories, curated by staff with industry experience and also offering free quotes online.

In February, Lakewood, Colorado-based SolarReviews acquired Solar-Estimate.org, which provides free estimates on the finances of wind, solar PV or other solar systems based on where people live, their energy use and type of building.

“There are other online directories of solar companies, but there are no other sites who are focused on customer reviews,” said Jesse Truax, SolarReviews co-founder and vice president of marketing and business development. “Up until this point, solar installers have had to rely on a hodgepodge of reviews websites to promote their customer reviews, although none of them were optimal for the solar industry.

“Reviews on Angie’s List are not visible by 99 percent of the adult population and solar is not in their top 50 categories,” he continued. “Many consumers who leave a solar review on Yelp are not actively involved on that website, and as a result of Yelp’s algorithm, their review is filtered and not shown on a solar installer’s profile. Other review sites provide good survey tools, but they are expensive and consumers do not go to them to look for solar installers.”

Even worse, he said, some websites that are tailored to the solar industry end up leaving would-be customers with a bad feeling about the whole concept of solar.

At SolarReviews, customers enter their zip code to find companies in the general area, and reviews of each one. The site includes a blog and summaries and diagrams explaining different types of solar systems and how they work. SolarReviews also has a highly active Facebook page where company staff and solar advocates share information about industry developments.

Truax said the site currently lists more than 3,000 solar installers, hosts more than 10,000 consumer reviews, and is on track to log more than 600,000 unique visitors annually. He said currently about 250 quotes are requested per month, a number they expect to rise to 500 by year’s end.

He said while other review sites often generate many more quote requests, queries on SolarReviews are more likely to result in a sale.

“When people request a quote through SolarReviews, we are finding that they already have a strong understanding of solar and they’re just trying to determine which installer they should work with,” Truax said.

Vincent Battaglia, CEO of Renova Energy Corporation in Palm Desert, California, said that in three months of listing his company has received four leads through the site and three of them resulted in the sale of $50,000 solar systems.

Companies choose listing plans starting at $99 a month. Brief listings that appear when someone searches for a nearby zip code are free. Battaglia said other review sites including Yelp and Reviews.com cost “two to five times as much and leads are not targeted to solar.” He was also frustrated by the “complicated algorithms” on Yelp that determine when a company shows up in a user’s search.

“For our solar industry it is a niche that I am surprised was not filled a few years ago,” said Battaglia. “We have been for years trying to get NABCEP [the North American Board of Certified Energy Practitioners] to create such a review site, though they have not answered the call as that is really not their bailiwick. They train and police the industry (while) a site like SolarReviews gives the consumer peace of mind.”

Most of the reviews are extremely positive. This might not do a lot to help customers choose between different companies based on past customers’ perceptions. But it does theoretically help them avoid a bad experience.

Truax noted that other review sites including Yelp and TripAdvisor also get predominantly positive reviews, and studies have shown customers are most motivated to offer reviews of good experiences. Truax said even without a wide differential in customer satisfaction, reviews provide a valuable service.

“While some use them to help differentiate between multiple choices, others use them because they help build trust in a business and validate a decision they were already leaning toward,” he said.

Truax said the explosion in interest in solar has led to inexperienced companies with poor quality entering the market. But he doesn’t see many reviews of such companies popping up on the website; rather most negative reviews have to do with “bad business practices.”

“This can come in the form of deceptive pricing, making promises that the solar installer can’t keep, or simply providing poor customer service during the installation or after the sale,” he said.

Review sites including Yelp and Amazon have been criticized over fake reviews produced by companies themselves, or even farmed out to low-paid workers in India. Truax said SolarReviews guards against this problem by looking for suspicious IP addresses or other red flags.

He said they’ve already caught a few companies producing their own reviews, and have warned them of “punishment” if they try it again. He said the site’s relatively small volume of reviews makes it easier to verify the identity of reviewers.

Battaglia said Renova has long gotten about 80 percent of its business from word of mouth and referrals, so he hasn’t focused on traditional advertising or mass marketing. He sees SolarReviews as a way to expand that practice, “spreading and getting those referrals to an even greater audience in a more efficient manner.”

Truax said that, “Historically, marketing hasn’t been a strong suit of the solar industry.”

But, he said, most companies “still do not understand the value of reviews.”

“Nielsen studies have shown that consumers trust online reviews more than any other form of advertising, aside from direct personal recommendations.  Yet, we still see installers running search engine ads, banner ads, ads on social networks and even investing significant sums in their website, but still not focusing any attention toward customer reviews.”