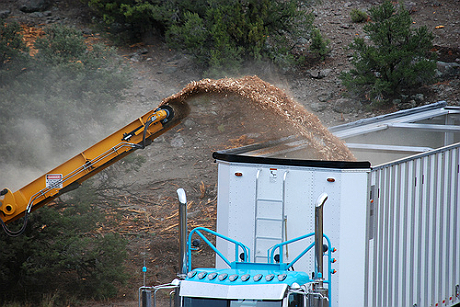 Wood fuel represents just a sliver of the Midwest’s heating market. By BTUs, solid biomass supplied 3 percent of the region’s heat in 2010, according to the U.S. Energy Information Administration. The rest came primarily from non-renewable, fossil fuels — mostly natural gas.

A biomass advocacy group called Heating the Midwest thinks the region could and should significantly boost the share of heat it gets from wood-burning stoves and boilers, and it unveiled a vision at its annual conference in Minnesota last week for how to get to a 10 percent thermal biomass goal by 2025.

“If the Midwestern region is serious about achieving a cleaner, more sustainable energy future, it must focus new and significant attention on thermal energy,” the group said in its report, which claims there would be environmental and economic benefits from transitioning to use of more renewable biomass for heating.

Thermal energy accounts for about 38 percent of all energy consumed in the Midwest. Yet most energy policy efforts in the region have focused on electricity and transportation. Nationally, thermal energy gets even less attention because it has little impact on warm-weather states.

The Northeast as an example

Heating the Midwest is looking to the Northeast as a successful example of where regional coordination and investment is helping to grow a wood-fuel industry. Its vision document was prepared by a Maine biomass research and consulting group, FutureMetrics, that did a similar roadmap for the Northeast in 2010.

Wood fuel provides about 4 percent of heating energy in the Northeast (six New England states and New York), where biomass supporters have announced a goal of providing 18 percent of thermal power by 2025.

In the Northeast, however, biomass has much less competition from natural gas. Only about 57 percent of homes and businesses there are heated by natural gas, compared to 72 percent in the Midwest. Low natural gas prices have hurt the financial case for biomass projects in much of the region.

Still, about 15 percent of Midwest homes and businesses use electric heat and another 11 percent use fuel oil or LPG (liquefied petroleum gases). In total, more than 12.6 million customers in the region are not connected to natural gas pipelines, including more than half of customers in North and South Dakota.

The Midwest biomass group sees potential to grab market share by converting these off-pipeline customers to wood pellet or chip fuels, which are less expensive than heating oil, propane and electric heat. (Two northern Minnesota towns, for example, are studying biomass options as an alternative to trucking in fossil fuels.)

‘It’s still a jump for some people’

When biomass is sustainably harvested, it can have significant environmental benefits. Modern biomass burners emit fewer particulates than those built decades ago, and they emit less sulfur dioxide and mercury than fossil fuels, the report says.

Also, the combustion of biomass doesn’t add any new carbon dioxide into the atmosphere — it only re-releases the carbon previously absorbed by the plants that serve as the fuel source. The overall climate impact of burning biomass is largely determined by the amount of energy that goes into harvesting, processing and shipping it.

The region has enough farms and forests to sustainably harvest enough biomass to heat 1,161,000 average-sized homes, according to the report. Ramping up the biomass industry to meet that demand would create hundreds of new logging, chipping and trucking jobs, it says.

Customers would save money on heating fuel costs, and the savings would likely grow as fossil fuel prices climb. But there would be upfront costs for converting or replacing existing equipment, and that’s one of the big barriers.

“It’s very hard to get people to invest in systems that are currently working,” said T.J. Morice, vice-chair of Heating the Midwest’s steering committee and also a vice president at a Wausau, Wisconsin, wood products company. “As good as it looks on paper, it’s still a jump for some people.”

Another issue is fuel supply. While the Midwest has plenty of biomass, someone still has to harvest, process and deliver it. Bulk distribution of wood chips and pellets is still in its infancy and will require “broad market adoption” to attract the necessary capital investment in storage and transportation equipment, the report says.

In the Northeast, Maine, Vermont and New Hampshire have already bridged that gap, with more than a dozen modern pellet delivery trucks operating there.

“They’ve been able to make a little more progress from the policy standpoint,” Morice said. “They’ve made some bigger strides, and that’s what we aspire to do here with this effort.”

The Heating the Midwest 2025 vision lists several “critical public policy elements” that are needed to achieve the target. They include:

Morice said part of the problem is that wood-fuel systems don’t have “policy parity” with other technologies. In Wisconsin, he said, customers can get rebates to replace an old petroleum burner with a newer, more efficient petroleum burner, but they can’t get assistance with installing a pellet unit.

Heating the Midwest held its second annual conference last week in Carlton, Minnesota, about 20 miles south of Duluth. The volunteer group came together a few years ago to promote thermal biomass heating in the region. Its steering committee includes industry, government, nonprofit and academic representatives.

Steering committee chair Brian Brashaw, a program director at the University of Minnesota-Duluth’s Natural Resources Research Institute, said he’s “bullish” on biomass and pointed to notable biomass installations such as District Energy in St. Paul and another at Wolf Ridge Environmental Learning Center in Ely, Minnesota.

“We have success stories,” Brashaw said. “We just don’t have enough of them.”