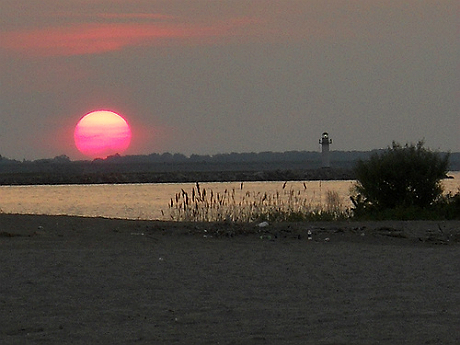 Environmentalists say Maumee Bay, near Toledo, would have been a better target for FirstEnergy conservation work. (Photo by rayb777 via Creative Commons)

When power plant operators commit pollution violations, they are often required by the Environmental Protection Agency to do mitigation work on environmentally sensitive lands.

Critics, however, say vague rules often let the violators choose projects based on convenience, rather than impact.

In 2007, oil leaked from a storage tank at FirstEnergy’s Bayshore power plant on the shore of Maumee Bay, on the western edge of Lake Erie near Toledo. The company said about five gallons of oil made it into Lake Erie.

A Clean Water Act settlement related to that and two other small oil spills at FirstEnergy plants means that the company will pay a $125,000 fine and donate 200 acres of wetlands along Lake Erie in northeast Ohio to a land conservancy.

The land targeted is about 60 miles from two of the plants that had the oil spills, in Cleveland and Lorain. And it’s more than 150 miles from Bayshore.

Maumee Bay and western Lake Erie are considered among the Great Lakes’ most troubled spots, plagued by nutrient pollution, toxic algae blooms, low oxygen levels, invasive species and other issues. Since the waters are very shallow, they are also critically impacted by effects of climate change including warming, evaporation and pollution from runoff during heavy rains.

Local advocates hoped the EPA’s settlement with FirstEnergy could play a small part in addressing some of these problems and helping to make up for Bayshore’s share of the impacts. They are disappointed and frustrated that the settlement is instead benefiting a distant and ecologically separate part of the lake.

EPA officials counter that protecting important wetlands in one contiguous chunk – rather than three separate parcels near each power plant – offers the greatest benefit to Lake Erie as a whole. Under the settlement, which takes effect in May, FirstEnergy is required to complete a project totaling $471,000 in value, including the land donation and donating funds to the Western Reserve Land Conservancy for future maintenance and preservation.

“They’re doing mitigation more than 100 miles away where the lake is 60 feet deep, while the bay by the plant is five feet deep,” and hence more critically affected by environmental assaults, said Sandy Bihn, executive director of Lake Erie Waterkeeper and a city council member in Oregon, Ohio where Bayshore is located.

“In a lot of these cases we feel like mitigation is happening in more rural, outlying areas, not the urban areas where the offense occurred…We’ve been doing refuges, adding land, there is so much going on here I don’t see why they had to go to the other end of the basin.”

What makes a ‘nexus’?

The Sierra Club, Natural Resources Defense Council, Ohio Environmental Council (members of RE-AMP, which also publishes Midwest Energy News) and the Alliance for the Great Lakes joined Lake Erie Waterkeeper in submitting a comment to the EPA in February complaining that the proposed settlement involved land far from the Bayshore plant in the “ecologically distinct” central Lake Erie basin.

A 1998 policy governing such “supplemental environmental projects” (SEPs) mandates that there be a sufficient “nexus” between the violation and the projects. The groups charged that the FirstEnergy settlement did not adequately meet this condition.

“We’re talking about the western Lake Erie watershed, which is one of the most vibrant and one of the most threatened parts of the Great Lakes,” said Thom Cmar, an attorney for Earthjustice, which represented the environmental groups. “We’re not denying that it’s good to preserve wetlands in central Lake Erie, but it’s not the same as western Lake Erie, which has such unique challenges and such unique value.”

The environmental groups noted that there are already several projects ongoing in the area that could benefit from funds from FirstEnergy. And such funding would bolster the impacts of tax dollars already being spent there under the federal Great Lakes Restoration Initiative (GLRI), they argued.

In its response to the groups’ comment – one of only two received during the public comment period – EPA Region 5 Superfund director Richard C. Karl wrote that geographic proximity is not mandatory in proving a nexus.

“These three adjacent properties, and associated funding to maintain and preserve them, cumulatively provide a greater eco-habitat than they would as three discrete SEPs of smaller size closer to the individual FirstEnergy facilities,” wrote Karl.

He also noted that the land being donated, in North Kingsville, Ohio, includes habitat for rare, threatened and endangered species including the Indiana bat.

Bihn said she is unhappy that neither the EPA nor FirstEnergy consulted with Lake Erie Waterkeeper or other local groups as the settlement was being drafted.

Karl wrote that while the EPA encourages companies involved in settlements to consult with local community groups, it cannot require they do so. And, he wrote, the agency’s own interactions with locals are limited by confidentiality provisions of settlements.

Cmar said he understands the EPA can’t discuss confidential negotiations, but he thinks the agency should have pressed the company for more concessions and more community involvement. He thinks that too often the EPA agrees to settlements that are relatively convenient for a violator but don’t benefit communities most impacted by violations. He acknowledged that a settlement is better for local communities than the imposition of a fine without a settlement, since such payments go to the general U.S. Treasury.

“But there has to be a middle ground where EPA could create a better process around these things,” Cmar said. “In the grand scheme of environmental actions a five-gallon oil spill is pretty small, but this is an extreme example of the process not working as it should.

“This issue seems to come up quite a bit. Communities that are bearing the burdens, particularly urban communities, are not seeing the full benefit of the settlements.”

Though he is only representing groups related to Bayshore, Cmar said that Cleveland-area residents also bore the brunt of pollution from the now-closed Cleveland FirstEnergy Lake Shore plant without seeing direct benefit from the mitigation.

In 2012 FirstEnergy shut down the majority of the Bayshore plant rather than install expensive required pollution controls to meet federal regulations. Bayshore units two, three and four were closed along with Lake Shore and four of the company’s other coal-fired plants.

But a unit at Bayshore that burns coal and petroleum coke from a nearby oil refinery remains in operation. The Bayshore plant has long been targeted by environmentalists for various reasons. Like most aging coal plants, its air emissions were blamed for contributing to climate change and public health problems.

It also had an open cooling system that was blamed for killing about 60 million fish a year plus two billion larval fish, as it drew water in from the bay and fish were either trapped against intake grates or sucked into the system, prompting the Natural Resources Defense Council to nickname it the “Bass-o-Matic.”

Meanwhile the plant also contributes to the eutrophication problem in Lake Erie, Bihn said, since it releases water that is about 10 degrees warmer than the natural temperature. While the plant doesn’t actually contribute nutrients to the lake, the warmer water facilitates algae growth.

Even if the oil spill’s impacts were relatively minimal, Bihn and other local leaders think FirstEnergy should do something to help make amends for all the issues caused or exacerbated by the plant over the years.

“Absolutely in the future we would like to see money from any damages stay in the area,” she said. “When you get a speeding ticket, the money goes to the local jurisdiction. This should be no different.”