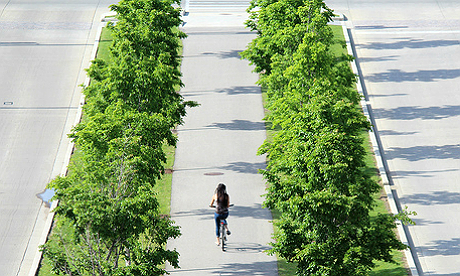 The Constitution Trail leads directly to the heart of the Uptown neighborhood in Normal, Illinois. (Photo courtesy Uptown Normal)

The Uptown neighborhood of Normal, Illinois, boasts an enormous traffic circle enclosing a popular civic space surrounded by what is likely the largest concentration of LEED buildings in downstate Illinois.

It’s among several neighborhoods around the Midwest that have been designed as “Leadership in Energy and Environmental Design for Neighborhood Development” (LEED-ND) projects. From the site of a former St. Louis housing project to a master-planned Chicago suburban train hub, the concepts behind LEED-ND have begun transforming not only buildings but also blocks into sustainable enclaves.

Formed in collaboration with the Congress for New Urbanism and the Natural Resources Defense Council, LEED-ND is now part of the landscape of 39 different Midwest cities.

An earlier pilot and a 2009 version of LEED-ND invitation drew several hundred submissions from across the country, according to Sophie Lambert, the USGBC’s director of neighborhood development.  Some communities have registered but never followed up on their plans due to a lack of money — or developers — while others got half-way, but not all the way, to the finish line. Others have been completed for years.

LEED-ND hasn’t been quantified in terms of energy savings, though Lambert believes the efficiencies saves money. LEED buildings use 25 to 30 percent less energy than typical structures of the same size and function, and at least one such structure is required in a LEED-ND development. Neighborhoods where residents can walk to retail stores, schools, churches and other community amenities will, in theory, reduce car trips and save gasoline.

The Midwest has several projects which have achieved LEED-ND and is home to some of the most forward-thinking planning firms in the field, among them McCormack Baron Salazar in St. Louis and Farr Associates in Chicago.

The first projects to reach Stage 3, the highest level of certification, include:

A tale of three LEED-ND neighborhoods

One of the first sustainably certified neighborhoods in the country turns out to have been at one time one of the poorest. Once home to a notorious housing project, Renaissance Place in St. Louis today boasts a mix of subsidized and market-rate housing units.

William Carson, director of sustainability for McCormack Baron Salazar, said Renaissance Place was funded largely by Hope VI money from Housing and Urban Development and a complex mix of state, local and philanthropic funding.  Even though the company largely works in distressed neighborhoods it always designs and builds with sustainability in mind, he said.

“The addition of green amenities of energy and water savings really makes sense in low income communities where people simply don’t have additional resources to waste,” Carson said. “On top of that our public partners like them because when you have an operating subsidy from a public authority and federal government they want to keep their expenses flat. So building green makes sense for the long-term operation.”

After receiving LEED-ND certification Carson’s organization added solar panels and storm water retention to Renaissance Place because, again, they end up saving money for residents. Those features are now common in all the firm’s LEED-ND projects.

If Renaissance Place has been good for residents it also has been good for business, helping McCormack Baron Salazar win work in LEED-ND projects in Los Angeles, San Francisco, Tulsa, Sacramento and Pittsburgh.

“We always made the argument this makes sense not because it’s the right thing with a capital R but because it makes sense in dollars. It helps us retain people, it’s good for our quality of life.”

Normal’s love of LEED began in 2002 when the city council required public and private buildings in Uptown to be LEED certified. The first to pass muster was a children’s museum, the second a transportation hub combined with a new city hall, the third a hotel. A residential building sited for a third parcel that eventually will be constructed by a private developer will have to meet LEED standards.

Doug Farr, of Farr Associates, worked on Uptown Normal and subsequently has helped plan more than a half dozen other LEED-ND projects.

“Uptown Circle was a bigger deal in that community than any other project we worked on — it was their downtown, their first go at urban redevelopment, sustainability and it involved multiple mayoral terms and public financing,” he said. “It was pretty high-stakes, played out in public and the press.”

The bet paid off. Davison, the planner, shares the council’s belief that it would make Normal more attractive to transplants and students, while locals have come to love Uptown Normal’s urban vibrancy.  The project helped in another way when the federal government awarded Normal a $22 million grant to help pay for the transit center.

“The third-party validation for the neighborhood seems to have helped” in winning the grant, she said.

In Minnesota, the Excelsior & Grand development came about when its architect, Elness Swenson Graham, heard about the LEED-ND pilot and decided the project could be the first ever certified. Although the project was always primarily about building a multi-use neighborhood on underutilized land in a suburb without any tradition of density, ESG decided to add some luster to it by getting the LEED-ND certification, said Dennis J. Sutliff, principal.

The firm spent $70,000 in non-billable hours to achieve LEED-ND but no phone calls of interest followed.  “Did we win another job because of LEED-ND? No,” he said. “We’ve been involved in other projects involving walkable communities but clients picked us because of our reputation, not because we built a LEED-ND community.”

Farr led a team that created LEED-ND for the USGBC and wrote a book on it. He sees challenges in moving forward, from a lack of money to what he sees as a growing, and disturbing, public disregard for planning.

The largest roadblock, however, is outdated planning ordinances.

“You would be hauled off to jail if you did LEED-ND in a lot of communities,” he said. Many cities mandate large block sizes of 600 to 1,800 feet long, well in excess of LEED-ND standards. Big minimum paving widths on roads encourage fast speeds while minimum lots sizes lead to a lack of a housing mix, as well as reliance on cars.

Yet the tide seems to be turning LEED-ND’s way. Farr points out the real estate bubble had a positive impact. “Guess what people want to finance and live in? Urban apartments — that looks a lot like LEED-ND,” he said. “Mixed use and some single-family, and some multi-family. The recession was kind to LEED-ND.”