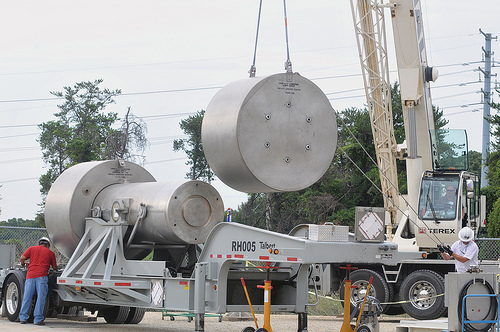 A cask of nuclear waste is loaded onto a truck at the Argonne National Laboratory in Illinois. (Photo via ANL)

A proposal in the U.S. Senate has advocates concerned that Illinois could become a leading contender for storing nuclear waste from around the nation.

The discussion draft of a Senate bill released April 25 and open for public comment until May 24 launches a process to create a “centralized interim storage” site (CIS) for nuclear waste that is currently stored at reactors nationwide.

And a June 2012 study [PDF] by the Oak Ridge National Laboratory using spatial modeling suggests that northern Illinois would be among the top possibilities.

Many nuclear energy critics oppose the concept of centralized interim storage, saying that the long-distance transport of nuclear waste to such sites would pose serious risks, and that interim storage sites could become financial and safety burdens especially if a long-term waste repository is never created.

“It would be a radioactive waste shell game on roads, rails and waterways,” said Kevin Kamps of the Maryland-based watchdog group Beyond Nuclear, talking by teleconference with anti-nuclear activists in Chicago gathered at the Nuclear Energy Information Service office last week. “We could have de facto permanent parking lot dumps.”

The draft bill, the Nuclear Waste Administration Act of 2013, is meant to carry out the recommendations of the Blue Ribbon Commission on America’s Nuclear Future [PDF], convened by the Department of Energy in 2010. Sponsored by Sens. Dianne Feinstein (D-Calif.), Lamar Alexander (R-Tenn.), Ron Wyden (D-Ore.) and Lisa Murkowski (R-Alaska), the bill deals with various nuclear waste issues including, centralized interim storage.

Public comments are also being accepted on additions proposed by Feinstein and Alexander specifically regarding centralized interim storage.

“There is no question that Illinois generally and Chicago specifically would see a high volume of [nuclear waste] traffic if the nation opts for centralized interim storage facilities,” said Dave Kraft, executive director of the Nuclear Energy Information Service in Chicago.  “We’re not merely at risk, we’re the bullseye.”

Currently most nuclear waste is stored on-site at plants, in the form of rods housed either in dry casks or pools. Critics say the pools pose serious potential danger in the case of a natural disaster, terrorist attack or accident, including a loss of electric power.

Kamps and other nuclear watchdogs advocate improving waste storage at the site of nuclear plants, including removing fuel rods from pools and storing them in dry casks.

“Waste needs to stay as close to the point of origin as possible, as safely as possible,” said Kamps. “There is no easy answer.”

Eventually, Kamps and other activists want to see a long-term storage site created in a geologically and geographically appropriate place. That was the idea behind the proposed long-term repository at Yucca Mountain, but that plan collapsed in the face of political opposition and complaints that it was not a suitable location.

Many industry critics see the interim storage plan pushed forth in the draft bill as a distraction, rather than a step in the process of finding a satisfactory long-term repository.

In a statement about the draft bill, the national watchdog group Public Citizen stated it “does little to correct the fundamental flaws in our country’s approach to nuclear waste management…Consolidated interim storage is an old plan that didn’t work when it was first introduced 30 years ago, or any of the myriad times it’s been proposed, because it does nothing to address broader storage and disposal issues.”

But Feinstein, in a statement released by the Senate Energy and Natural Resources Committee, said the bill “establishes a desperately needed nuclear waste policy, employing a consent-based approach that will expedite waste removal from at-risk locations and decommissioned plants.”

While Yucca Mountain appears to be off the table, government and industry actors have long been exploring the idea of long-term storage at the Department of Energy’s Savannah River, South Carolina site or at the Waste Isolation Pilot Project (WIPP) in Carlsbad, New Mexico, where defense industry radioactive waste is currently stored.

The push for centralized interim storage is driven in part by the risks and public concerns posed by waste stored onsite at reactors. Sen. Wyden’s constituents are particularly concerned about risk from nuclear plants along the Columbia River, including the closed-down Hanford site upstream in Washington.

The Blue Ribbon Commission’s January 2012 report proposed legislative changes which are enshrined in the proposed act. The commission noted that under current law one interim storage facility can be built, and only after a long-term repository is licensed. A similar provision was included in the 2012 Nuclear Waste Administration Act, which did not pass. The current proposal calls for multiple interim sites to potentially be built, and does not require a long-term repository be in the pipeline.

The discussion draft of the bill lays out a process for choosing a site, including creating evaluation criteria for sites, holding public hearings and “solicit[ing] states and communities to volunteer sites,” as noted in a Department of Energy summary. Sen. Alexander called for additions to the draft including a requirement the government issue a request for proposals for pilot storage sites within 180 days.

The Oak Ridge study includes various maps with proposed storage locations based on different factors including population along routes and transportation distance. In every scenario, northern Illinois is a likely contender.

The bill notes that consent from local officials, communities and Native American tribes is mandatory; and that any plan must be approved by Congress. Kamps said, however, that the definition of consent is vague, and the industry is known to have much influence with Congress.

“At least there’s some talk of consent,” he said. “But nuclear power is one of the most powerful lobbies in Washington.”

The bill would also create a new federal agency, the Nuclear Waste Administration, that would take responsibility for the waste. Utilities with nuclear plants would continue paying into a capital fund meant to finance nuclear waste storage. Currently, about $765 million annually is paid into the fund, according to the Nuclear Energy Information Service.

However, if no long-term repository is identified by 2025, utilities could be released from the capital fund obligation.

In Kamps’ words, this means that “[utility] ratepayers and taxpayers, otherwise known as the American people,” will be paying for the waste storage for many years to come.

“The nuclear industry has a few lawyers on its team,” Kamps said. “If they can get out of paying into the capital fund, I think they will.”