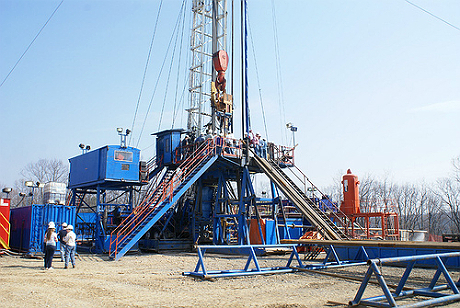 Another link in an industrial chain Ohio hopes to see growing around the Utica Shale play was added Tuesday with the opening of a factory in Youngstown that builds natural gas processing equipment.

Houston-based Exterran Holdings Inc. said it built the 65,000-square-foot plant in northeast Ohio to be close to the Appalachian shale gas and oil plays. It has been supplying the region’s gas and oil operators from its Texas and Oklahoma plants.

“Our customers are actively participating in the development and production of oil and gas in this region, including the Marcellus and Utica shale plays, making this a natural geographic fit for us,” said Exterran President and CEO Brad Childers. The $13 million plant will ship its first completed units in about three weeks and will have 100 employees at full capacity, the company said.

Low prices for natural gas and gas liquids products, and a lack of infrastructure links to downstream processing and markets, have slowed drilling in the Marcellus and Utica plays. The latest well data from the Ohio Department of Natural Resources recorded 639 Utica wells permitted, 311 drilled but only 89 producing.

But the initial construction of gathering networks, processing and pipelines continues, as has expansion in a wide variety of supply and service industries, Ohio officials said.

“Exterran was the first win we had,” said Jacob Duritsky, managing director for research at Team Northeast Ohio, a nonprofit economic development firm that is trying to coax Gulf Coast companies to open in Ohio.

Direct employment in shale gas and oil production is still a fraction of the state’s total workforce. But investment and job growth related to the hydrocarbon development continue to climb. Cleveland Plus, another state economic promotion nonprofit, cites the $650 million expansion of V&M Star’s pipe production plant in Youngstown, a $310 million modernization at Timken Co.’s Canton plant and a $64 million Baker Hughes Inc. well drilling services plant in Massillon as examples.

While well permits in Ohio’s Utica Shale formation have climbed above 600, drilling has not yet taken off. “If you look at what’s producing — 89 wells — that’s still pretty low, largely due to the midstream infrastructure that’s not in place yet,” Duritsky said.

“It would probably take about three years before a lot of that processing and gathering infrastructure is in place, and then you really start to see that activity,” he added.

Ohio’s biggest dreams remain for the gas liquids production to grow large enough to justify construction of a multibillion-dollar ethane cracker in the region, to turn Utica-Point Pleasant production into petrochemical feedstocks for the state’s large polymer-related producers.

Royal Dutch Shell PLC has a potential cracker facility site in Pennsylvania close to the Ohio border but has not said when or whether the plant will be built.

Asked about the outlook for the Shell cracker, Duritsky said, “Cautiously optimistic is maybe even a little too strong.”

“The last time we were in Houston, the sentiment was it’s probably a little more likely to happen than not, but it still might be a 60-40 [percent] proposition,” he added.

“We just don’t know. But we do have the [plastics production] assets in place in the state, particularly in northeast Ohio, that can make a compelling case on the demand side for these products.”

Long term, the outlook for a cracker in the region may depend on the strength of demand for feedstocks from the region’s consumers, he said. “They … have to say we can’t afford to keep bringing this in from overseas” or the Gulf Coast.

Correction: An earlier version of this story misstated the owners of a Utica Shale $400 million gathering and processing plant.