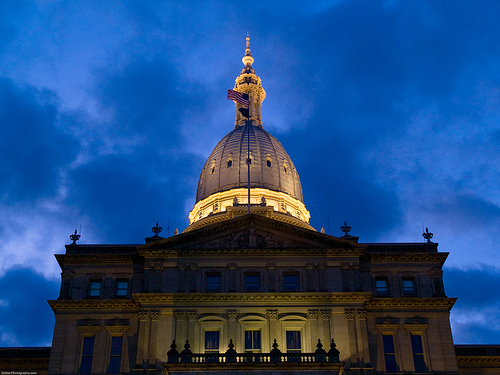 A surplus of electric power in the Midwest, low wholesale power prices, a jump in retail rates, and the dramatic growth in customer choice participation in Illinois and Ohio are prompting at least two states in the Midwest to look again at the merits of letting retail customers pick their electric supplier.

On April 30 in Indiana, Governor Mike Pence signed into law a bill that among other things requires a state legislative committee to perform a study on the merits of retail electric customer choice.

Meanwhile in Michigan, which has the highest electric rates in the region, lawmakers are hearing testimony on whether to lift that state’s choice cap of 10 percent of total retail load.

The Midwest, with its historically low electric rates, was slow to the debate over deregulation — allowing customers to choose their electric supplier much like they choose their natural gas or telephone supplier — in the 1990s. In the Midwest, only Illinois, Ohio, and Michigan ever went to some form of retail electric customer choice. They had rates higher than neighboring states which pushed large users – already used to procuring their own natural gas supplies – to lobby state legislators for a competitive electric industry model in the late 1990s.

Michigan was the last of the states to restructure its electric industry in mid-2000, just before the Enron debacle chilled the conversation about deregulation. However, by 2007, only 3 percent of Michigan customers had switched suppliers, and wholesale rates were high so there was little incentive to do so.

Energy Information Administration data [PDF] shows that fully restructured states in the Midwest now actually have lower industrial rates than do some traditionally regulated states – a dramatic reversal of rankings for states like Wisconsin and Indiana which have historically enjoyed much lower electric rates than their neighbors for 30 years. Deregulated states like Ohio and Illinois are seeing dramatic growth in retail choice participation as a result.

In Michigan, the House Energy and Technology committee heard about the pros and cons of lifting the ten percent cap on retail choice at hearings last month. Former PSC Commissioners Laura Chappelle and Bob Nelson, as well as Phil O’Connor, a former Illinois Commerce Commission Commissioner, argued in favor of raising the cap.

Nelson told Midwest Energy News that customers now in the queue to switch suppliers to retail choice (but barred from doing so since the utilities have already reached the 10 percent cap) could save $180 million per year by taking service from an alternative supplier. O’Connor said because of the limits, Michigan consumers were paying an average of about 2 cents per kilowatt-hour above the regional market price in 2012, or 20 percent higher, amounting to $1.8 billion in extra costs.

O’Connor noted that in the decade prior to restructuring, Illinois’ electricity prices were consistently more than 10 percent higher than the U.S. average.  However, following restructuring, Illinois rates fell below the national average. O’Connor also claimed that “monopoly” states (i.e. traditionally regulated states like Wisconsin and Indiana) in the Midwest had rates rising the fastest between 2008-2012.

“A review of the history of rates over the last twenty years clearly demonstrates that deregulation has failed to deliver lower prices,” he said. “The rate differential between regulated and deregulated states is the same today as it was in 1990. Electricity is an essential service and we must never let it become a speculative commodity.”

Transeth and former PSC Commissioner Monica Martinez, who helped craft the 2008 omnibus energy legislation which imposed the 10 percent choice cap, told the Committee that the greater rate burden in Michigan was caused by the economic downturn, demand destruction, increases in fuel costs, state mandates, EPA retirements, and other factors.

They also said deregulation does not have the economic drivers to build the type of generation that will be needed to meet future resource needs. Transeth and Martinez claimed that regulation has proven to be an effective model in controlling rates and is fundamental to insuring the system is reliable, secure and safe.

Dr. Ken Rose, an energy economist based in Columbus, Ohio who also consults for the Michigan State University Institute of Public Utilities, told the committee that all regions (both choice and non-choice) of the country are seeing higher prices since the early 2000s.  He said wholesale prices have fallen since 2008, and have been roughly steady since then. Rose said prices in deregulated states increased rapidly from 2002 until 2008, and have since leveled off (or decreased slightly).

For the states that still regulate, prices continue to increase, but are still below states that restructured, Rose stated. He told Michigan lawmakers that he is not saying that one option is clearly worse or better than the other – retail access vs. regulation — but that there appears to be no clear benefit for retail customers unless you look at just the last couple years with retail choice.

Rose said that could quickly change if natural gas prices increase again. He also questioned whether deregulation amounts to “competition” since we replaced it with a “complex, cumbersome, and expensive ’deregulatory‘ system.”

Rose said that the current wholesale and retail access-based model is a “composite of different markets, that are highly regulated and frequently adjusted by FERC and the states.”

“In states without choice, rates increase because there is no competitive pressure,” he continued.

In Indiana, the passage of SB 560 includes a provision requiring the Legislature’s Regulatory Flexibility committee to do a study on the merits of retail electric customer choice and report back to the legislature by November 1, 2013 (including with a draft of suggested legislation).

The proponents of this provision of the bill could not be identified although Indiana Industrial Energy Consumers (INDIEC) Director Bette Dodd recently told lawmakers that Indiana’s industrial electric rates are now higher than Illinois and Ohio (which allows choice).

Vince Griffin of the Indiana Chamber said his group did not sponsor the provision of SB 560 but — like the industrial customers – is concerned Indiana’s loss of its historic electric rate advantage. The state once had among the lowest electric rates in the nation but now ranks 23rd.