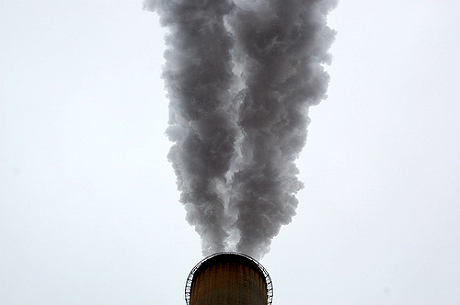 The smokestack at the #4 unit of the Boswell Energy Center near Grand Rapids, Minnesota is seen in this December 2006 photo. (Photo by Than Tibbetts via Creative Commons)

The company’s “Energy Forward” plan calls for adding wind and hydropower, retiring one coal-burning unit, and converting two others to natural gas. Along with continued conservation efforts, the investments are projected to lower the utility’s carbon emissions 30 percent by 2015 compared to 2005 levels.

It’s the years beyond that, however, that worry climate activists.

That’s because Minnesota Power has also proposed investing more than $350 million on an air-quality project at the utility’s largest generator, a 585-megawatt coal-fired unit near Grand Rapids, Minnesota, known as Boswell 4.

The project, which has the support of the Minnesota Department of Commerce, would bring dramatic reductions in particulate matter, sulfur dioxide, and mercury emissions, which would mean less haze over the region’s scenic lakes and forests and a lower risk to residents for respiratory and neurological health problems.

But it could also financially commit the company to burning coal for another two decades, during which the unit could spew more than 6 million tons of greenhouse gases at a time when scientists warn major reductions are needed to avert the most catastrophic effects of climate change.

‘We need much bolder action’

A coalition that includes Fresh Energy, the Sierra Club, the Izaak Walton League, and the Minnesota Center for Environmental Advocacy is asking the Minnesota Public Utilities Commission to require an in-depth study of carbon and other environmental impacts. A public comment period is open until Monday, May 20.

All four groups are members of RE-AMP, which also publishes Midwest Energy News (which is based at Fresh Energy).

If Boswell 4 were to continue to operate past 2030, it’s less likely Minnesota Power will be able to continue the pace of the carbon reductions it’s achieving through 2015.

In that context, the Minnesota case provides an example of a much larger concern — not just in the Midwest, but also globally.

“We need much bolder action,” said Frank O’Donnell, president of Clean Air Watch, a Washington, D.C., advocacy group that is not directly involved in the Boswell 4 case. “Incremental steps like those proposed by Minnesota Power are probably not enough to avoid catastrophic climate change.”

Minnesota Power is on track to exceed the state of Minnesota’s goal of a 15 percent reduction in carbon emissions by 2015. Once it finishes implementing its plan, its generation mix will consist of one-third renewables, one-third natural gas and one-third coal — down from about 60 percent coal today.

Rudeck said the utility has a successful conservation program that routinely meets the state’s 2 percent annual requirement. And it continues to add renewables, including 400 megawatts of wind power from the Bison Wind Energy Center in North Dakota and a 250-megawatt purchase agreement from Manitoba Hydro.

Even if the company can continue to find more opportunities such as these to keep pace with Minnesota’s voluntary state goal of 80 percent carbon reductions by 2050, will that be enough to avoid extreme climate change?

While it is difficult to project the exact impact of rising carbon emissions, recent research suggests targets like Minnesota’s may be too hopeful.

In February, the journal Energy Policy published a paper by Netherlands researcher Michel den Elzen that concludes developed nations need to cut carbon emissions in half by 2020 to have a “medium chance” of preventing climate change’s worst impacts.

And in November, PricewaterhouseCoopers projected that in order to avoid jumping over the guardrail from uncomfortable to dangerous climate change, the global economy needs to cut its carbon intensity 5.1 percent every year from now until 2050. The average annual rate since 2000 has been 0.8 percent.

The United States has pledged to reduce carbon emissions 17 percent below 2005 levels by 2020. As of 2011, the country had achieved a 7 percent reduction (though that progress was aided by the recession). One way for the U.S. to meet its 2020 goal, according to PricewaterhouseCoopers: replace all coal-fired generation with natural gas, which emits significantly less carbon dioxide per unit of energy produced.

Continuing to burn coal may not make these targets impossible, but it certainly makes them more difficult to hit.

“We are very concerned with what we call life-extension projects at coal plants,” said Beth Goodpaster, an attorney for the environmental groups intervening in the Boswell 4 case. “When you’re putting over $350 million into a coal-fired power plant, you are making it ever so much harder to … phase it out.”

‘We think that we have a better plan’

Goodpaster said they don’t believe Minnesota Power has fully evaluated all of the possible alternatives, such as replacing the unit with a mix of energy conservation, renewables, natural gas, and grid power purchases. Those it did consider were evaluated too narrowly, without considering health and environmental costs, she said.

Jessica Tritsch, an organizer for the Sierra Club’s Beyond Coal campaign, said Minnesota Power needs to study a broader range of alternatives that include things such as energy conservation, wind and solar power. “We’re not convinced Minnesota Power has fully studied those options.”

“It’s clear that their agenda is really to shut down every baseload power plant in the state,” Rutledge said. “We think that we have a better plan.”

Minnesota Power’s plan is the result of a process that, as required by regulators, seeks out the lowest-cost, reliable generation mix that meets environmental regulations. Rudeck said an all-conservation option isn’t a suitable replacement for the Boswell 4 unit.

“If that was the best option for customers, the resource [planning model] would pick it,” Rudeck said. “Clearly it doesn’t.”

The Minnesota Department of Commerce agrees. In comments filed Tuesday, the department’s Division of Energy Resources said the emissions-reduction project at Boswell 4 is “reasonable” for meeting state and federal mercury rules, and that it believes the project is in the public interest.

The utility’s Boswell 4 evaluation compares the emissions-reduction project with two natural gas alternatives, which it concludes would be more costly to customers.

The environmental groups say that conservation and renewables can win in an economic comparison with fossil fuels. They want state regulators to deny the Boswell 4 upgrades, let it retire in 2016 when new federal mercury rules take effect, and replace it with wind, solar, efficiency, gas and grid power purchases.

“You could have showed us why those other options are impossible,” Goodpaster said.

Minnesota Power studied retirement options for its coal-fired power plants last year, however, and state officials say that study, and the Commerce Department’s own calculations, show that replacing Boswell 4 isn’t possible without increasing costs, even under “extreme assumptions” about carbon and fuel prices.

“[I]nitial Department analysis determined that, at the expected level of environmental compliance costs, retiring Boswell 4 is not a cost-effective option,” the state’s Division of Energy Resources said in its coal-diversification study comments.

It’s the environmental costs that concern the petitioners:

“The decision to retrofit [Boswell 4] rather than retire it or replace it with a natural gas plant would, over time, result in the emission of an enormous amount of additional air pollutants, especially greenhouse gases,” the environmental groups say in their filing. “Continued emissions of GHG are contributing to the environmental and public health problems caused by climate change which are numerous, severe, and irreversible.”