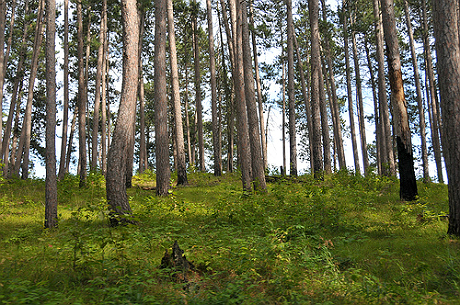 A forest in north-central Minnesota. (Photo by Faruk Ates via Creative Commons)

As a Midwest biomass group promotes a goal of drawing 10 percent of the region’s heating energy from wood fuels by 2025, more questions are sure to arise about whether that amount of fuel could be harvested sustainably.

Heating the Midwest, which announced the goal at its conference last month, estimates that the region has more than enough logging and agricultural residue to supply a tenth of its heating energy by the middle of the next decade.

Making sure that those feedstocks are collected in a way that doesn’t damage the environment will require a review and updating of state harvesting standards, the group says in its 2025 vision document.

Getting the rules right could mean the difference between developing a fuel source that helps address climate change and air pollution challenges versus one that ultimately does more harm than good.

“When biomass started getting quite a bit more attention… folks started realizing that we need to be ahead of the game here.” said Anna Dirkswager, a biomass consultant with the Minnesota Department of Natural Resources (DNR).

The DNR and the Minnesota Forest Resources Council convened a 17-member stakeholder group that included representatives from industry, academia, government, and environmental groups.

“Developing the guidelines was a very long, controversial process, as you can imagine,” Dirkswager said. “I think because that group had such a broad membership, what we came out with was really great.”

The 42-page addendum to the state’s existing forest management guidelines, in general, says biomass harvesters should leave behind about one-third of the debris that’s created during the collection of tree tops and limbs.

About 20 percent of the tops and limbs that are cut should be scattered across the site. That, combined with “incidental breakage” from a typical harvest will be enough to meet the goal of leaving one-third behind.

Stumps, roots and litter should be left on the forest floor, and biomass harvest should be avoided in areas that are prone to erosion or home to threatened or endangered species.

Leaving material behind can help preserve wildlife habitat, maintain soil nutrients, minimize erosion and protect water quality, among other benefits, according to the guidelines.

The rules are mandatory in state-owned forests and on most county land, but voluntary on private land. Companies with master logger certifications are also audited for compliance with the guidelines.

Even though the rules aren’t mandatory across the board, Dirkswager said Minnesota’s forests are well-protected by third-party certification programs, as well as by the current state of the forestry market.

Minnesota has more land that’s dual-certified by both the Forest Stewardship Council and Sustainable Forestry Initiative than any other state — more than 5.6 million acres, including hundreds of thousands of acres of county and private forests.

And the state sells wood very cheaply, especially since the housing crash, and until that changes she doesn’t expect much pressure for private wood sales. “We just don’t really see harvests on private land right now,” she said.

While Minnesota officials believe its biomass harvesting guidelines are sound, the reality is that they remain untested, and that more study and time is needed to see whether they work.

Almost as soon as the guidelines were published, the recession hit and domestic fracking took off, leading to a plunge in natural gas prices that sidelined several biomass projects.

The science is clear that removing biomass from a site inevitably removes nutrients, but questions remain about how much needs to be left behind in order to sustain a forest’s health and biodiversity.

“Although a certain amount of woody debris retention is essential for sustaining biodiversity and wildlife populations, science does not tell us how much woody debris can be sustainably removed from forest harvest sites,” the Minnesota guidelines state.

That said, studies have indicated that nutrient levels in most Minnesota soils are sufficient to tolerate “a large number of such harvest rotations without harmful effects,” it says.

One observation he’s made so far is that the amount of incidental breakage left behind varies a lot depending on the forest and soil type. In aspen forests, the amount of breakage left behind can be almost enough on its own to meet the guidelines, whereas harvests in conifer forests tend to be cleaner with less incidental breakage. One recommendation might be for states to offer more specific guidelines for different soil types.

“There is some evidence that suggests the impact of these removal treatments is really going to vary based on soils, but our guidelines for the state are kind of a one-size-fits-all,” D’Amato said.

Other questions, he said, include how different harvesting practices affect fungi. There’s some evidence that certain species decline after biomass harvesting, and it’s unclear how significant that is to the future health of the forest.

“I recognize that as much as we like to focus on the details and research and science,” D’Amato said, “it’s hard to turn those details into a policy.”