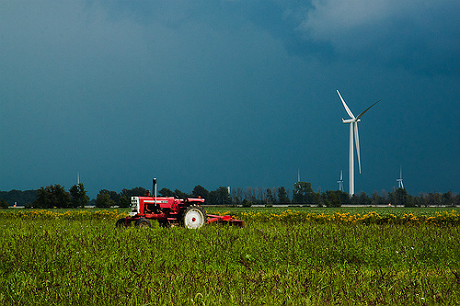 On the Great Plains, the gusts ahead of a strong cold front can deliver thunder, lightning, hail and downpours.

Also: A surge in electricity from wind farms big enough to make the power grid go haywire if it caught utilities off guard.

Utilities call it a “ramp event” — a sudden spike in wind power generation followed by an equally fast drop-off.

For Xcel Energy, which has more wind power on its system than any other utility, these swings can be as large at 800 megawatts, the equivalent of a large baseload power plant suddenly switching on.

The Minnesota utility is keenly interested in knowing as precisely as possible when these ramps are going to occur, not just to avoid overloading its system but also so it can make full use of all that wind power.

The company is funding new research at the National Center for Atmospheric Research (NCAR) in Boulder, Colorado, to improve weather forecasting for renewable energy facilities.

Xcel Energy partnered with NCAR in 2009 to begin developing wind power forecasting tools that are already saving ratepayers millions annually by allowing the utility to make better use of wind power.

A paper published by the Bulletin of American Meteorological Society in 2011 estimated that improved wind energy forecasts have the potential to trim the nation’s electricity bill between $1 billion and $4 billion annually.

Over the next two years, NCAR will be working on several improvements, including better ramp forecasts and new tools to predict ice build-up on turbine blades and estimate rooftop solar output.

This chart, via NCAR, shows how weather can impact wind farm output.

NCAR Program Director Sue Ellen Haupt said it’s challenging to predict the precise profile of a ramp event, such as the burst in speed and change in direction that happens as a cold front passes.

“That’s what we’re working hard to fine tune,” Haupt said. “We often know that it’s going to come, but perhaps we’re off by an hour or two.”

And with an 800-megawatt spike not out of the question, an hour or two matters. Grid operators need to be ready to adjust the system as it happens in case the timing or intensity of the forecast is off, Haupt said.

Generally, the sooner grid operators can be certain about a ramp event, the more options they have to cut back generation at more expensive fossil fuel power plants.

“If the wind comes up and they aren’t expecting it, they have to dump it,” she said, meaning the power produced by the wind farms would go to waste.

The center plans to borrow its own research on how ice accumulates on airplane wings and apply it to a new tool for alerting wind farm operators to potential icing conditions on turbine blades.

As ice accumulates on wind turbine blades, the added weight causes them to turn less efficiently, leading to a drop in electricity output. Heavy or rapid ice accumulation can actually damage the turbines if they continue operating.

Haupt said the tool NCAR is developing for Xcel Energy will pull in temperature, humidity and other weather data to predict when ice is likely to occur, how that accumulation will affect output, and whether turbines should be shut off to prevent ice damage.

The secret sauce will be technology NCAR developed over the last two decades for the Federal Aviation Administration (FAA) for forecasting icing conditions on airplane wings.

The project will also conduct experiments at Penn State University, where researchers will observe how freezing rain and fog accumulates on blades and how it affects the turbine’s performance.

The amount of solar power on the Midwest’s electricity grid today is still small enough that it’s inconsequential from a grid management perspective — a blip on the charts that easily falls within operators’ margin of error.

That’s likely to change in the years ahead, as solar prices decline and state policies encourage development, such as the 1.5 percent solar by 2020 standard recently passed by the Minnesota Legislature.

“This is an issue that has really hit in California already,” Haupt said. “Xcel doesn’t serve the parts of the country where solar is increasing as rapidly, but they see it coming.”

Unlike with wind farms, utilities don’t get a separate data stream for customers’ rooftop solar generation. “When the sun is shining, it will just look to Xcel like they’re using less energy,” Haupt said.

NCAR is building a tool for Xcel that will try to help it better understand how much of a load drop-off is due to customers turning down their air conditioners versus generating more of their own solar power.

That will hopefully lead to better forecasts on how weather conditions affect a region’s solar carve-out on sunny days.

Haupt said Xcel is being proactive in helping to develop the next generation of renewable energy forecasting tools, which will be more important as a larger percentage of our electricity comes from variable sources such as wind and solar.

“We need to know when they’re going to be [generating] so that we can use them well,” Haupt said.