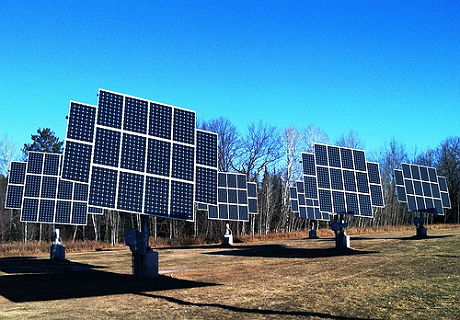 Solar panels at the Audubon Center of the North Woods near Sandstone, Minnesota. (Photo by CERTs via Creative Commons)

Minnesota Gov. Mark Dayton on Thursday signed into law an energy bill that’s projected to give the state a more than thirtyfold increase in solar generation by the end of the decade.

The Solar Energy Jobs Act was rolled into a larger, omnibus economic development bill and approved by the state’s legislature last week.

The section that’s drawn the most attention is a 1.5 percent by 2020 solar electricity standard for large utilities that is on top of the state’s existing 25 percent by 2025 renewable mandate.

But the bill has several other components that could rival the solar standard’s impact, from expanded incentives and net-metering reforms to the creation of shared, community “solar gardens.”

Clean energy supporters in Minnesota had high hopes going into this year’s legislative session, the first since an electoral sweep in November flipped control of both chambers back to Democrats.

A coalition of environmental groups announced in January that its top energy priority was a proposal to make utilities generate a tenth of their electricity from solar by 2030.

The bill was ultimately diluted to a 1.5 percent solar standard by 2020, with a non-mandatory goal of hitting 10 percent by 2030. It also exempts municipal utilities, rural electric co-ops and large industrial customers.

“It’s important for people to understand that while 1.5 percent seems like a low number, it’s in a relatively short timeframe and it’s actually a fairly significant amount of solar deployment,” said Lynn Hinkle, policy director for the Minnesota Solar Energy Industries Association.

Over the next seven years, investor-owned utilities in the state will need to add an estimated 450 megawatts of solar power to their systems — up from about 13 megawatts today.

At least a tenth of that new solar generation will need to come from small systems of up to 20 kilowatts. To help finance those installations the bill extends an existing rebate program, with some changes.

Xcel Energy had sought to phase out its Solar Rewards rebate program at the end of 2013. The Minnesota Department of Commerce ordered Xcel to continue the program through 2015, and now the Legislature has mandated a similar incentive stay in place until 2018.

The bill allocates $5 million per year for the program from a state renewable development fund. The biggest change is that instead of upfront rebates, the incentives will be rewarded based on the amount of electricity produced.

The move from rebates to a production incentive is intended to make sure Minnesota is getting the most bang for its buck by discouraging people from installing systems in shady or low-performing locations.

“A production-based incentives gives the money to the best producers instead of just rewarding whoever puts up a system,” said Laura Cina, managing director for the Minnesota Renewable Energy Society.

The shift to production incentives also applied to the Made in Minnesota incentive, an additional subsidy for locally manufactured solar panels that was extended to include solar thermal systems.

Most people today don’t have an opportunity to claim these incentives, though. Cina said only about a third of Minnesotans own a rooftop that’s sunny enough, strong enough and angled correctly for installing solar panels.

That’s why solar supporters are particularly excited about a new program created in the bill known as community “solar gardens.”

The concept will let customers buy individual solar panels in shared, community solar installations. The electricity generated by a customer’s panels would be credited on their utility bill the same as if it were on their own rooftop.

“This opens up the door for a really large number of people to participate in solar,” Hinkle said.

Xcel Energy, the state’s largest utility, is required to file a plan with regulators by Sept. 30 for setting up and operating a community solar gardens programs, which will be optional for other investor-owned utilities.

The projects must have at least five subscribers each with no member owning more than a 40 percent interest. The size is capped at 1 megawatt, but there is no limit on the number of shared systems built.

One project has already been announced, a 40-kilowatt array to be developed by Applied Energy Innovations and Minnesota Community Solar on a Minneapolis warehouse rooftop.

The bill will also make it easier for investor-owned utility customers to connect larger solar installations to the grid by lifting the state’s net-metering cap to 1,000 kilowatts.

Net-metering is a policy that standardizes utility payments and hook-ups for all solar and other customer-owned generation that fits the criteria, which until now was limited to systems under 40-kilowatt capacity.

Minnesota passed the nation’s first net-metering law in 1983, but in the 30 years since then the size limit became an artificial cap on commercial solar development, deterring companies from building larger systems.

The new legislation also opens the door for a possible successor to net metering known as “value of solar.”

Instead of paying customers the retail electricity rate for their unused solar power, as they do under net metering, utilities can choose to offer a different rate based on the value their customers’ solar panels offer to other ratepayers and the environment.

State energy officials will create an outline for how to calculate the value of solar, which must consider the value of the electricity, transmission and distribution benefits, and environmental benefits, and utility regulators would need to sign-off on the studies.

The process could help lend some clarity in the debate over whether customers who own their own generation are pushing costs onto other customers or creating benefits for the electricity grid.

Criticism of the law

Not everyone is happy with the new law, however. The bill, which passed the House by a narrow margin, included protections for the state’s mining and paper industries in order to gain the support of lawmakers from northern Minnesota. Critics say those carveouts prove the bill will create a financial burden for other energy users.

Utilities also opposed the measure, citing lack of demand for new generation and concerns about higher costs for ratepayers.

“We think that solar energy has a lot of promise, but we think that promise is in the future and we think that we need to go slow,” Rick Evans, Xcel Energy’s Director of Government Affairs, told a state Senate committee in April.

Backers of the new law acknowledge there will be a cost, but predict it will be outweighed by the economic benefits.

“This is an investment,” said John Farrell of the Institute for Local Self Reliance, in an interview with Greentech Media. “For every dollar of public money put in, Minnesota will get an enormous return in private capital. It is, essentially, private capital building power plants for the public utilities. That’s a really great deal, especially when it also accomplishes environmental and economic goals.”

Editor’s note: An earlier version of this article incorrectly stated the target year for Minnesota’s renewable energy standard. It is 25 percent by 2025, not 2020.