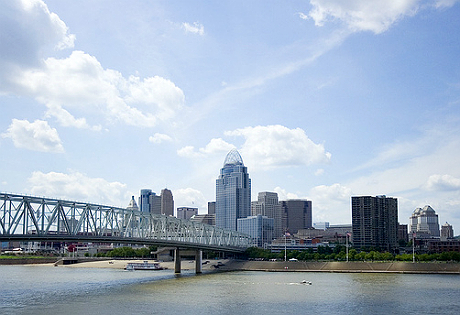 Three years after a federal housing agency ruling left a new energy improvement financing mechanism in limbo, a program in Cincinnati is starting to move forward.

It would be the second Property Assessed Clean Energy (PACE) program in Ohio since the state passed a law authorizing the funding mechanism in 2009. So far only Toledo has successfully launched PACE financing, another effort in Cleveland failed to materialize.

PACE allows building owners to borrow money through loans or bonds to pay for energy-friendly improvements, from solar panels to high-efficiency HVAC systems to double-paned windows and doors. The amount borrowed is repaid via a special tax assessment, and the debt remains with the property if ownership changes hands.

The FHFA was concerned that in most states with PACE programs, the liens resulting from the energy loans would have priority over mortgages, meaning a PACE lender would be paid ahead of the bank in the case of foreclosure.

“Most of the early PACE programs had a big residential component, and FHFA pretty much stopped them in their tracks,” said Larry Falkin, director of environmental quality for the city of Cincinnati.

FHFA has not changed its position that PACE presents a risk to mortgage holders like Fannie Mae and Freddie Mac. However, the Cincinnati plan is out of its holding pattern, concentrating on commercial properties rather than housing, Falkin said.

There are still a few obstacles to the city’s proposed commercial PACE program, but local officials and environmental groups involved with the venture are optimistic it will get off the ground as soon as the end of this year.

Working it out with unions

The exact language of Cincinnati’s PACE proposal is still being hammered out. A challenge has been juggling the needs of the players involved. Program administrators are currently preparing a report for the city council on the basic structure of their plan, including how to tie in union job training, prevailing wages and apprenticeships into PACE retrofits.

Unions want a piece of the program, but most installers doing work similar to what PACE would require are non-union, said Jack Clock, project coordinator at Green Energy Ohio, one of the environmental groups involved with the Cincinnati energy efficiency effort.

“Are we going to pay union scale even if it’s a non-union project?” asked Clock rhetorically. “We have to find a way to make it equitable somehow.”

Another open question is how the program will be funded, but backers expect the Port of Greater Cincinnati Development Authority will issue bonds to cover initial costs, much in the same way Toledo’s PACE program has received financial help from its own port.

“It’s a matter of compromise,” said Falkin. “There will always be tension between delivering a project inexpensively and the best we can. We’re not just trying to create ‘green’ jobs for the community, but good jobs.”

PACE is prevalent along the West Coast, but other parts of the country have encountered impediments trying to enact the project. In Michigan, only one city, Ann Arbor, has set up its own district. A private company recently launched the Lean & Green Michigan initiative in 2012 to help local governments work through the process.

Starting small is the key to success, Falkin said.

The Ohio PACE law allows cities to set up a Special Energy Improvement District (SEID) where assessments can be used to pay for energy improvements. Toledo established its SEID with the help of a $15 million federal grant, and the program has since expanded to cover a handful of northwest Ohio counties.

Cleveland, on the other hand, tried to initiate its own PACE program via a consortium of multiple municipalities, an ambitious, complex undertaking that ultimately had too many moving parts to thrive. This is a lesson Cincinnati has taken to heart.

The Cleveland effort “was a matter of making a complicated deal even more complicated,” Falkin said.

In addition to Cincinnati’s port authority, the Greater Cincinnati Energy Alliance (GCEA) and environmental sustainability nonprofit Green Umbrella have banded with city officials to push PACE programming. Although the proposition is still at the preliminary stage, Falkin expects GCEA to manage the program locally.

“We have all the right players at the table and strong support from the city,” said Falkin. “I’ve never heard anyone say, ‘No, don’t do PACE, it’s a bad idea.’ We’ve got a good path forward, we just need to craft the best proposal we can.”

Cincinnati already has an environment-friendly foundation in place for PACE to flourish, Clock said. The city’s Green Cincinnati sustainability plan is a five-year roadmap addressing local climate protection measures. Although PACE may not be folded into the overarching program, officials will support the measure if it can meet standards of conserving natural resources and enhancing the local economy.

PACE is also a good deal for property managers, he says, by allowing participating owners to pay for energy improvements with minimal upfront investment.

“Buildings become more marketable when they go through certification, too,” Clock said. “It would be a big advantage for a district” to have energy improvements installed in its properties.

For building owners, “it’s a financial no-brainer,” said Falkin. “With no upfront costs, (PACE) is cash positive in each year of the deal. Owners will save more money reducing their energy bill than they’ll spend to pay off financing.”

Program backers hope to have an initial report ready for city council by June, aiming for the first round of PACE financing sometime later this year.

“Nothing’s a done deal yet, but we are optimistic,” Falkin said.