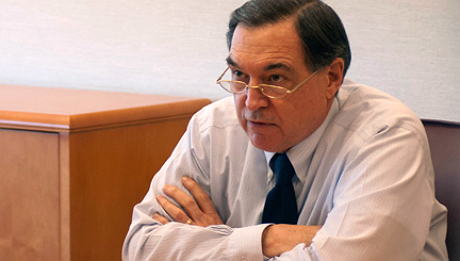 “I expect I will be here for at least several more months and will continue as chairman and voting on matters before the commission,” Wellinghoff said in an email.

A former Nevada consumer advocate, Wellinghoff came to FERC to fill a vacant seat in 2006 with the backing of Senate Majority Leader Harry Reid (D-Nev.). He was reconfirmed in 2008 for a full five-year term as a commissioner, and Obama tapped him in March 2009 to become chairman — a step that didn’t require Senate confirmation. His current term expires June 30.

It remains unclear whether Obama will tap a sitting Democratic FERC commissioner — Cheryl LaFleur or John Norris — to take the commission gavel or whether he will pick an outsider.

Any new commission member would need to be confirmed by the Senate Energy and Natural Resources Committee, which has questioned whether FERC is doing enough to protect the grid from tough new U.S. EPA air pollution standards.

Obama turned to McKinney-James in 2008 to lead his transition team’s FERC review. She also chaired the Nevada Renewable Energy and Energy Conservation Task Force, where she worked with Wellinghoff to champion the issues of solar, efficiency and other green power sources (Greenwire, Nov. 17, 2008). She is currently the managing principal of Energy Works LLC, a Las Vegas-based public policy advocacy firm focused on renewable energy.

FERC commissioner Norris is also said to be keen on the chairmanship. When the chairmanship opened in 2009, Norris decided to throw his hat into the ring, knowing that then-Senate Energy and Natural Resources Chairman Jeff Bingaman (D-N.M.) was backing Suedeen Kelly and Reid was backing Wellinghoff, who was then acting chairman (Greenwire, April 15).

Wellinghoff jarred the energy and nuclear industries when he took the helm of FERC in 2009, saying the United States may not depend on fossil fuel or nuclear plants to run all the time.

Since then, Wellinghoff has pushed a pro-renewable energy agenda that has at times drawn the ire of Republicans questioning grid reliability and the divvying up of millions of dollars needed to build new power lines.

Wellinghoff was instrumental in pushing FERC’s massive, landmark Order 1000, which revamps the process for planning and paying for the nation’s high-voltage transmission system to make way for increasing amounts of solar and wind on the grid (Greenwire, July 26, 2011).

“He’s demonstrated a strong committment to renewables and demand-side management, and that’s certainly the policy agenda he pursued,” said William Scherman, chairman of the energy regulation and litigation group with law firm Gibson, Dunn & Crutcher LLP, and FERC’s former general counsel. “He accomplished a lot of what he set out to do.”

Wellinghoff also ramped up conversations with state regulators at the National Association of Regulatory Utility Commissioners, tackling concerns over grid reliability and new EPA rules, cybersecurity, demand response and the layout of the “smart grid.”

“Although we have had our disagreements — as there is a natural tension between state and federal governments — we utilized our collaborative dialogues to maintain a positive relationship,” NARUC President Philip Jones said in a statement.

Energy and Natural Resources Chairman Ron Wyden (D-Ore.) in a statement praised Wellinghoff for launching critical investigations to protect consumers against traders and financial firms who manipulated energy markets while noting his disagreement on transmission-related issues. Wellinghoff oversaw stepped-up oversight of the power trading markets, and in April 2011 the commission levied a $30 million fine against a trader who gamed the gas markets (Greenwire, April 21, 2011).

“While we disagreed on electric transmission siting issues, he deserves credit for championing efforts to increase America’s renewable energy supply,” Wyden said. “His expertise and leadership will be missed.”

One of Wellinghoff’s major impacts was his successful advocacy of demand response initiatives to reward customers who reduce power when demand and prices peak, industry officials said.

“Jon is really the one who has pushed demand response and recognized it for its economic values — that it could compete against generation and provide utilities with another option,” said Dan Delurey, president of the Demand Response and Smart Grid Coalition, a trade association for this sector of the industry.

Under Wellinghoff, FERC adopted Order 745 in 2011, requiring grid operators in organized electrical markets to pay demand response providers market prices for wholesale power — as if they were generators. “It wasn’t just a question of FERC regulation,” Delurey added. “He used the bully pulpit [taking] every opportunity to talk about the entire picture.” FERC reported that potential demand response programs grew by 26 percent between 2010 and 2012.

“Jon Wellinghoff will long be remembered as a highly impactful FERC chairman,” said Peter Fox-Penner, a principal with the Brattle Group consulting firm. “He understood that the electric and gas industries are both in periods of great transformation,” and led FERC policies to promote a lower-carbon, more cyber-secure industry structure.

But just how much of that legacy remains could be determined by a federal appeals court, which is currently considering challenges to Order 1000. A group of utilities is accusing FERC of overstepping its authority when it issued the far-reaching rule (Greenwire, June 5, 2012).

Wellinghoff’s legacy will also be shaped by his replacement and just how focused he or she is on ensuring renewables and efficiency are incorporated into the grid, sources said.

Any new Obama nominee is likely to face tough questions on how new federal air regulations and an increased amount of renewable generation will affect grid reliability, said Robert Dillon, a spokesman for Alaska Sen. Lisa Murkowski, the Senate Energy and Natural Resources Committee’s ranking Republican. Despite strong Republican concern over EPA rules, Wellinghoff has maintained that implementing the new standards will not cripple the grid (Greenwire, Oct. 28, 2011).

The president’s pick will also face questions about the country’s response to newly discovered shale gas and export terminals and pipeline infrastructure that FERC regulates.

“Two of the leading issues dealing with FERC have been reliability and gas pipelines,” Dillon said.