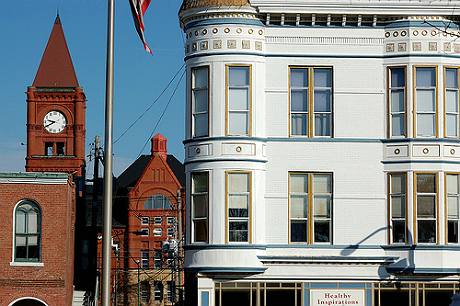 Downtown Fairfield, Iowa. (Photo by Will Merydith via Creative Commons)

Enticed by a $73,000 carrot from the local gas and electric utility, the town of Fairfield, Iowa launched a campaign one year ago to cut its energy consumption by 4 percent – an ambitious goal in the energy efficiency world.

They’ve blown past that.

Alliant Energy selected Fairfield and two other Iowa communities to be the first beneficiaries of its Hometown Rewards efficiency program. The town of 9,500 committed to reducing its 15-month consumption of electricity and gas by the equivalent of 6.75 million kilowatt hours (kWh). The town has so far reduced residential energy use by more than 10 million kWh, according to monitoring by an outside consulting firm.

Jeanine Penticoff, Alliant’s director of energy efficiency, economic development and account management, said Fairfield “has been an outstanding example of a Hometown Rewards community. They are committed, engaged and have come up with some really creative ideas to encourage energy efficiency throughout the community.”

Fairfield, home of the Maharishi University of Management, is arguably more sustainability-minded than most Iowa small towns. But the goal of becoming even leaner and greener has resonated far beyond the town’s New Age subculture.

Alliant’s Hometown Rewards program “has engaged a large part of the community,” said Michael Halley, an oil broker and Fairfield city councilman. “You hear it with the business community, especially industry. Businesses are getting it. They understand that saving energy equals saving money.”

Thousands of residents have planted trees, weatherized homes, learned about efficiency at workshops or signed pledges promising to, for example, wash their clothes in cold water or exchange their incandescent bulbs for compact fluorescents. School classrooms have also taken up the cause.

Fairfield’s environmental credentials on display outside a local business. (Photo by Will Merydith via Creative Commons)

Campaign organizers set out last spring to involve at least half of Fairfield’s residents in the campaign. As of late April, according to organizer Scott Timm, nearly a third of the town had gotten involved in some way.

Aaron Hirshberg, creative director of the Green Building Supply store in Fairfield, says he has seen a shift in his town’s mindset about saving energy.

The campaign “is making (energy conservation) more mainstream,” he said. “It’s united the community behind the goal of getting these rewards.”

Alliant Energy invited each of the communities taking part in Hometown Rewards to choose a reward to work towards. Fairfield opted to have solar panels installed on the roof of the town’s public library, which has been an integral part of the community’s drive towards greater efficiency.

It’s a near certainty that the community will install the $60,000 worth of panels, to be financed partly by Alliant and partly through other sources, on the library roof late this summer. With its large south-facing roof and handy metal ridges, the library was deemed the best candidate for a solar array.

“It’s ideal,” said Rebecca Johnson, the library’s director. “You can clip them right on.”

Johnson said a monitor will be set up over the front desk that will show a running tally of the energy produced by the solar panels.

The library, with its emphasis on lifelong learning, has been a sort of lynchpin for Fairfield’s efficiency campaign. It has hosted monthly seminars on energy-efficiency, one dimension of Fairfield’s outreach and education efforts.

“Attendance at Scott’s workshops has been good,” Johnson said.

Johnson and her library staff have sought out new materials pertaining to the topics of Timm’s efficiency workshops. They’ve displayed the book covers on a bulletin board and have printed bookmarks that list materials on specific topics.

The library has served another instrumental role in the campaign. The former reference desk now is home to Fairfield’s volunteer center, which has sought out people to assist with various parts of the Hometown Rewards program.

Timm says that since early 2012, about 1,800 volunteer hours have gone into several projects, including planting trees at three schools, one parking lot and a public orchard. The first of two orchard-planting dates was on Earth Day, 2012 – the kickoff of the efficiency program.

“It was one of the biggest events we’ve had in several years” in Fairfield, said councilman Halley.

With a $1,000 grant from Home Depot, volunteers also were recruited to weatherize 22 homes, half of them belonging to military veterans. And just a few weeks ago, work started on a Habitat for Humanity house that’s being constructed with an emphasis on energy efficiency. Alliant will film parts of the process.

Timm expects that many more efficiency enhancements will be coming, thanks to an innovative funding mechanism his team developed. Starting with the initial gift from Alliant, Fairfield’s organizers snagged a $1 million loan from Iowa state government, then persuaded several local lending institutions to contribute an additional $3 million to create an energy-efficiency loan fund of just over $4 million.

Businesses and homeowners can tap into the fund to make costly efficiency investments like insulation or windows or solar panels, and pay off the loans with savings from energy bills.

The Hometown Rewards organizers have also trained contractors in green building technology — about 35 to date.

Kids have been getting in on the action too. At Pence Elementary School, different students drawn from each of the classrooms formed an audit team each month starting in January, and scoured the building looking for signs of both good and bad conservation practices. They then applied sticky notes with congratulations – or reminders to do better next time

Their goal at the outset was to cut 2,400 kWh of energy usage over the course of five months. As of mid-May, they’d reduced their usage by 4,600 kWh. They celebrated with pizza and a tree-planting on the school grounds.

“The kids said it was really easy,” said Pence principal Christopher Welch. “We spoke about that, how when we work together, it becomes very easy to achieve these goals.”