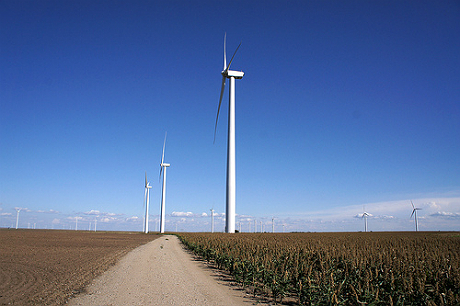 The Smoky Hills Wind Farm in Kansas, where farmers have become a strong constituency for renewable energy. (Photo by Brent Flanders via Creative Commons)

Renewable energy lobbyists are undefeated this year in defending the state-level purchasing mandates that have helped fuel explosive growth in industries like wind and solar, and that streak looks set to remain intact as part-time state legislatures around the country are wrapping up their work for the year.

The tea party-fueled victories that reshaped Congress after the 2010 and 2012 elections also delivered substantial numbers of new Republican lawmakers to legislatures in states like North Carolina, where the state House and Senate both came under GOP control in 2010 for the first time since the end of the 19th century.

The newly elected lawmakers brought an influx of skepticism toward policies to promote clean energy, such as the renewable portfolio standards that require utilities to provide a minimum amount of energy from non-emitting sources like wind, solar and hydro.

At least a half-dozen states saw an introduction of legislation to repeal or weaken RPS laws, though none has been enacted. And renewable proponents were able to go on the offense in a few states like Colorado, where legislators voted to strengthen an existing RPS.

The repeal push is being driven by many of the same conservative groups that have lobbied against federal policies like the production tax credit, which Congress extended in January over the objection of some tea party-backed lawmakers.

Clean energy proponents see their string of victories as evidence of maturation in the wind and solar industries that has created a strong base of support even in the most conservative parts of the country.

As the renewable industry grows — with more people drawing paychecks from manufacturing wind turbines, installing solar panels or leasing their land to energy developers — stakeholders on both sides of the debate see supportive policies as becoming increasingly easy to defend. The industry called on farmers and local business leaders among others to tout the virtues of RPS laws.

“We had chambers of commerce from across the state … all saying the same thing, which is wind has been a very positive economic development story across our state,” said Kimberly Svaty, who helped lead the defense of Kansas’ RPS for the Wind Coalition, an industry-backed group focused on policies in the states in the Southwest Power Pool and Texas.

The Kansas Legislature is expected to adjourn in the next few weeks, but lawmakers’ attention there is focused on broader budget issues, and legislation to effectively eliminate the state’s 20 percent by 2020 RPS has been tabled for the year.

Lawmakers in North Carolina also are wrapping up their work for the year with one of the most closely watched RPS repeal bills sitting in the legislative dustbin — for now.

“I expect that North Carolina and Kansas will probably pick up this issue again in 2014 and lead the charge across the country once again,” said Todd Wynn, who directs a task force on energy, environmental and agriculture issues for the American Legislative Exchange Council.

ALEC, a conservative group whose membership includes business executives and state lawmakers, drafted model legislation that inspired the RPS repeal efforts in several states. The anti-RPS push by ALEC led the leading solar and wind trade associations to end their affiliation with the organization (Greenwire, Jan. 30).

Other groups pushing for the repeals included Americans for Prosperity and Americans for Tax Reform, both of which are based in or around Washington, D.C., and push to lower taxes and reduce regulation at the federal and state levels. State-based conservative think tanks also contributed research to supporting the anti-RPS case, such as the Kansas Policy Institute and North Carolina’s John Locke Foundation.

In addition to North Carolina and Kansas, RPS repeal bills were introduced in Wisconsin, West Virginia, Minnesota and Texas, Wynn said, although in some cases the bills were not even given a legislative hearing. Wynn said he is encouraged that a growing number of states are exploring RPS repeal, but he acknowledged that such efforts will only grow more difficult as the targeted industries grow — increasing their political clout at the same time.

“When a state passes a renewable energy mandate, what that means is that these products that are eligible renewable resources become embedded in the political framework of the state,” Wynn said.

Of course, where Wynn sees an increasingly entrenched special interest, wind and solar proponents see an economic engine that is proving hard for legislators to ignore.

“The thing that was very interesting to me was the people who voted against the bill [to repeal North Carolina’s RPS] were able to look at the investment in their communities,” said Bruce Thompson, a partner at the Parker Poe law firm in Raleigh, N.C., who represents renewable energy companies.

Thompson said the industry was aggressive in delivering that economic message, pointing not just to direct employment numbers but ancillary benefits, such as the ability for hog and poultry farmers to manage their animals’ waste by harvesting it as an energy source.

“The agriculture community in North Carolina really stepped up and was very aggressive in its lobbying against the bill,” he said.

Farmers were similarly engaged in the Kansas fight, where they pointed to payments from wind developers to construct turbines on farmland as a source of financial security that helped guard against drought or other reductions in crop production.

The pro-RPS coalitions, which like their opponents featured a mix of local and national groups, were primarily interested in defending the policies as good for their states’ economies, rather than touting them as ways to improve air quality or address climate change.

Dorothy Barnett, executive director of the Kansas-based Climate and Energy Project, said it was RPS opponents who were mostly focused on climate change, advancing arguments questioning the scientific consensus linking human activity to rising temperatures. That was a question renewable energy supporters were just as happy to leave out of the debate, she said.

“We were not the ones in the room trying to make the RPS about climate change,” she said.

The same was true in Colorado, which stood out this year as one of the few states to strengthen its RPS with the Legislature there passing a bill to increase rural cooperatives’ required renewable energy production from 10 percent to 20 percent by 2020, said Sarah Cottrell Propst, executive director of the Interwest Energy Alliance, a regional coalition of businesses and nongovernmental organizations.

“It’s really showing this is a business and economic development bill, not motivated so much by environmental concerns,” she said. “This is really about jobs for rural Colorado and expanding the renewable energy sector in that state.”

Correction: A previous version incorrectly implied that the North Carolina House and Senate came under Republican control in the 2012 elections; the shift occurred in 2010.