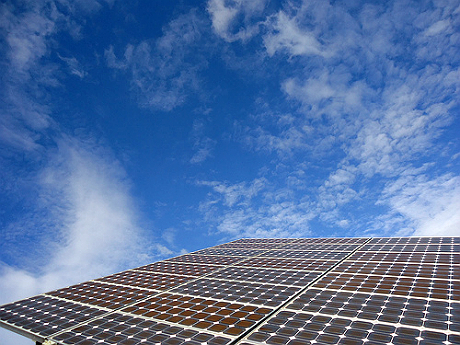 As the population grows, the economy improves and the climate warms in its service territory, Xcel Energy projects rising demand for electricity on hot summer days before the end of the decade.

On April 15, the Minnesota utility proposed meeting that new peak demand by building three 215-megawatt natural gas power plants — one in the Twin Cities and another two in North Dakota.

Six weeks later, though, Xcel and other investor-owned utilities in Minnesota were presented with a new legislative mandate to generate 1.5 percent of their electricity from solar by 2020.

The state’s new solar standard is expected to spur development of an estimated 450 megawatts of solar power over the next six and a half years, which raises the question: does Xcel still need all three of those gas peaking plants?

The Minnesota Public Utilities Commission, which has already agreed to the need for more generation, will meet today to consider whether some of that need could be met with solar power instead of fossil fuels.

The commission is charged with choosing the best plan for ratepayers from five possible proposals, including Xcel Energy’s natural gas plants and a renewable developer’s plan to install more than 30 solar arrays strategically spread across Xcel’s territory.

The renewable company, Geronimo Energy, says its 100-megawatt distributed solar project could economically supply about a seventh of the additional generation capacity Xcel Energy expects to require by 2019.

Other options include proposals by Invenergy and Calpine Corp. to expand existing natural gas plants in Cannon Falls and Mankato, respectively, and a bid by Great River Energy to sell its surplus electricity to Xcel customers.

A coalition of environmental and policy groups, including Fresh Energy, the Sierra Club, the Izaak Walton League and the Minnesota Center for Environmental Advocacy (all of which are members of RE-AMP, which publishes Midwest Energy News) have intervened in support of Geronimo Energy’s solar proposal.

Xcel Energy expects to add about 275 megawatts of solar capacity by 2020 in order to meet Minnesota’s new solar standard, but complying with the law is unlikely to change its need for new natural gas peaking plants, a company official said.

McCarten said the utility needs more power that it can flip on when electricity demand is highest. “We call it dispatchable. You can turn it on when you need it and you have very high confidence that it’s going to be there.”

Even though its electricity demand is highest on hot summer afternoons, Xcel Energy doesn’t have the same confidence that solar power will be there at those times that it has with a conventional natural gas peaking plant.

This confidence level is given a score, known as a “capacity credit,” during the utility’s planning process. How much generation capacity can they expect when they need it? For solar, during peak hours, the utility only gives credit for about half of a system’s maximum output.

After discounting solar for its capacity credit, Xcel Energy doesn’t think it will be able to depend on more than about 140 megawatts of generation from solar during hours of peak demand. And that’s after it’s finished complying with the standard.

“The natural gas peakers that we’ve proposed are to serve a need in the 2017 to 2019 timeframe. We certainly won’t have all the solar installed by then,” McCarten said.

Geronimo Energy, though, says its solar project could supply almost half of the 150 megawatts the utility will need by 2017. The 100-megawatt project would be completed by the end of 2016 and receive a capacity credit for 72 megawatts, the developer said.

“We think it can displace one of these peaking plants,” said Betsy Engelking, Geronimo Energy’s vice president.

Geronimo Energy filed its plan as part of a competitive acquisition process set up by state utility regulators a decade ago requiring Xcel Energy to consider whether better options exist for ratepayers before building its own power plants.

Today, the commission is expected to review the five proposals for completeness before referring them to an administrative law judge, who will establish the facts to be used in the commission’s decision later this year.

Geronimo Energy is proposing to build ground-mounted solar arrays at 31 sites across Xcel Energy’s territory. Each installation will range in size from about 2 megawatts to 10 megawatts, and they’ll total 100 megawatts of capacity.

The systems won’t tie up capacity or rack up fees on long-distance transmission lines. Instead, they’ll be built at or near existing local distribution stations where demand is forecast to rise.

“We think the costs are going to be competitive without considering any bells and whistles,” Engelking said.

By “bells and whistles,” she was referring to solar or renewable energy credits that utilities use for meeting state requirements. Geronimo filed its proposal a month and a half before the Minnesota Legislature passed the 1.5 percent solar standard.

Engelking said Xcel views wind and solar as a separate niche, and that it’s time for the utility to start considering them head-to-head with conventional sources. In this case, solar generation can match Xcel’s demand as well as natural gas, she said.

“We’re presenting evidence that shows how high the correlation is,” Engelking said. “Some of it is just common sense. When does Xcel have its peak energy needs? When it’s hot and sunny out.”

‘It’s not an exact science’

Geronimo Energy intends to dispute the 50 percent capacity credit that Xcel assigns to solar. Engelking said the utility could count on solar generating at between 70 percent and 80 percent of its maximum output during hours of peak demand.

Xcel Energy declined to comment specifically on Geronimo’s solar proposal. “That whole evaluation is underway, and I don’t think we would say anything about that until it’s concluded,” McCarten said.

On whether the utility is undervaluing solar’s capacity credit, Rick Evans, Xcel’s regional government affairs director, said it’s a judgement call based on performance history, and that the company is partially limited by what regulators and MISO will approve.

“It’s not an exact science. It’s one where reasonable and very smart people sit down and have long debates,” Evans said.

That debate is likely to play out over the next several months. Some of the most important numbers remain under wraps. Cost estimates and projected kilowatt hour prices in the public proposals have been redacted as trade secrets for now.

Solar advocates are convinced, though, that the economics for peaking power are tilting in their favor.

John Farrell, a senior researcher at the Institute for Local Self-Reliance and a leading expert on distributed generation, said he’s skeptical about Xcel Energy’s assumptions, including its forecasts for natural gas prices.

“I think they are operating mostly on inertia here with their approach to meeting their peaking needs,” Farrell said. “It seems relatively ridiculous that there’s so little attention being paid to solar compared to how willing they are to just step up and build another natural gas plant.”