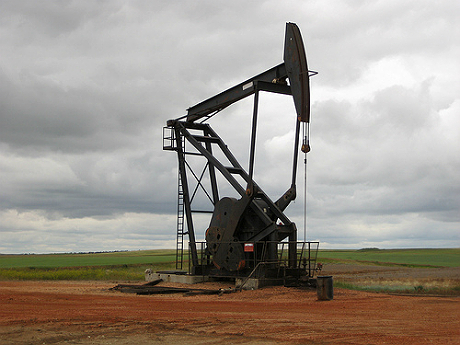 (Photo by hitchhacking via Creative Commons)

The vast Bakken Shale formation in North Dakota and Montana, a cornerstone of hopes for North American energy production, will need costly, advanced oil recovery strategies in order to tap its full potential over the next few decades, researchers and industry officials say.

Primary oil recovery methods centered on horizontal drilling and hydraulic fracturing will leave 90 to 95 percent of the Bakken and underlying Three Forks oil resource in the ground, said Albert Yost II, manager of exploration and production technology at the National Energy Technology Laboratory in Morgantown, W.Va.

“We’re only going to get 2 to 10 percent of the barrel out of Bakken with primary recovery,” Yost said in an interview — and results so far are at the lower end of that range.

Producing the rest of the available Bakken resources will require enhanced recovery, most likely through injection of carbon dioxide or raw shale gas underground to increase subsurface pressures and force oil through dense, “tight” rock layers to oil wells, researchers say. “Enhanced oil recovery is going to be a most critical function of the Bakken resource,” said Ron Ness, president of the North Dakota Petroleum Council.

“There is still some effort at delineating the Bakken. But we’re past the gold rush phase of finding out the heart of play,” said Steven Ilkay, a Toronto-based energy consultant. “You’re going to have to use secondary methods.”

Industry officials and researchers say it’s unclear how effective and affordable these advanced techniques will be in the Bakken, raising a major uncertainty about the formation’s ultimate contribution to U.S. energy production. But the oil content in the Bakken rocks is so vast, producing even a relatively small part of the resource will have a big impact on U.S. oil production, they add.

“You are talking about a tremendous volume of oil that hopefully could be competitively produced,” said W.F. “Rick” Bott, president and chief operating officer of Continental Resources Inc., the Bakken’s biggest leaseholder and producer. “It is a very significant prize to go after.”

The U.S. Geological Survey estimates the Bakken holds 7.38 billion barrels of still-undiscovered, technically recoverable oil, a midpoint in its range of resource assessments. That is just over a year’s supply of current U.S. crude oil consumption.

Advanced recovery methods such as water flooding can increase production from conventional oil reservoirs by 50 percent. Making that work is another matter in shale rock, with its much smaller pathways for oil to travel.

“It becomes a balance of economics: how cheaply you can drill and produce it,” Bott said. “Currently, we estimate we get about 3 to 5 percent of the oil that’s actually in the rock” through horizontal drilling and fracking. If enhanced recovery adds another 4 to 5 percent, that doubles the output, he notes.

Laboratory tests on several advanced techniques are promising so far, but haven’t answered whether the processes will be effective or affordable, said John Harju, associate director for research at the Energy and Environmental Research Center, a part of North Dakota University. “We can do amazing things in the lab. How well they translate into the field takes more time and good field tests,” he said. He hopes tests will begin within a year.

Injecting carbon dioxide is a common enhanced recovery technique for conventional oil and gas fields, but it might not work in fractured horizontal seams in the Bakken, said Ernesto Alegria, manager of investor relations for Denbury Resources Inc. of Plano, Texas. Denbury’s business is capturing carbon and shipping it to oil fields.

The gas flows through the path of least resistance, he said, and if it escapes through drillers’ underground fractures, it won’t deliver pressures needed to move oil through rock pores, he said.

Flooding reservoirs with water to build pressure is another standard tactic for conventional wells but has not been proven in the Bakken, Harju said.

“Much of the Bakken formation is a little peculiar,” Harju added. The rocks are considered “oil-wet”; that is, the rock micropores generally have a thin film of oil on the outside, instead of water, as is the case generally in conventional oil reservoirs. When water flooding encounters rocks that are water-wet, it sweeps the oil through toward the well, he said. But with oil-wet rocks, the injected water tends to drive the oil deeper into rock micropores, in the wrong direction.

“Right now, the two most bullish things are CO2, and hydrocarbon gases,” he said, the raw shale gas that is also an abundant resource in the Bakken.

Finding an answer engaged Harju’s center at North Dakota University, NETL and a group of companies supporting the research, including Continental, Hess, Marathon Oil and Taqa North, a subsidiary of the Abu Dhabi National Energy Co.

EIA projects that CO2-enhanced oil recovery picks up appreciably after about 2020. That is when EIA expects production to decline in the more profitable tight oil fields, leading to a rise in oil prices that makes CO2 injection economical for producers. Production using CO2 methods will peak in 2034 to 2040 as the quality of oil reservoirs deteriorates and supplies of the gas run short, EIA said in its “Annual Energy Outlook 2013.”

Bott said that CO2 recovery could begin on a limited scale in the next two or three years in the better parts of the field. “On a fieldwide view, it is probably a little further down the road because there is so much left to do” in Bakken through current production operations, he said.

The window for successful enhanced recovery won’t always stay open, however, Yost said. “You have to start before the pressure drops too low” in the reservoir, he said.