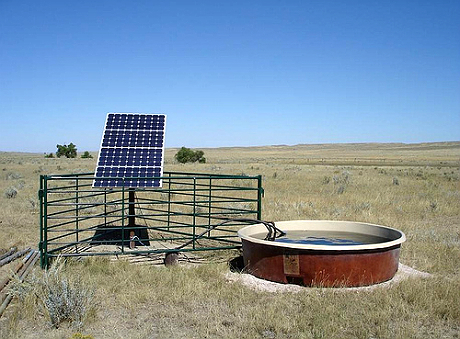 A solar powered livestock watering system in Wyoming. Systems such as this one have been eligible for funding under the REAP program. (Photo by eXtension Farm Energy via Creative Commons)

The Senate passed the Farm Bill Monday night by a vote of 66 to 27 with wide bipartisan support.

Now a big question is whether mandatory funding for clean and renewable energy programs will continue at reduced levels or disappear.

The answer depends on what happens later this summer in the House of Representatives and in conference committee.

The Senate bill that passed on Monday provides $900 million in mandatory funding over five years for the Rural Energy for America Program (REAP), the Biomass Crop Assistance Program (BCAP), and related programs.

On an annual basis, that comes to $180 million–31 percent less per year than under the 2008 Farm Bill. The 2008 law expired last year but was extended until September 30 as part of January’s fiscal-cliff compromise.

“Since they were begun in the 2002 Farm Bill, the clean energy programs of the Farm Bill have received broad bipartisan support,” notes policy advisor Andy Olsen at the Environmental Law & Policy Center. “It’s especially important to the Midwest because it has really helped us to drive renewable energy development forward.”

“Each of these programs helps us decrease our dependency on foreign oil,” stresses Chandler Goule, Vice President of Government Affairs for the National Farmers Union.

“Farm bill projects have supported 6,600 projects. They’ve employed over 15,000 people. And they’ve generated or saved more than 7.3 billion kilowatt hours of electricity, which is the same amount of electricity to power 680,000 homes,” says Goule.

While 31 percent is a big cut, earlier versions of the bill would have cut up to 38 percent, says Olsen. And funding is still mandatory.

Mandatory funding is automatic and doesn’t require additional action from Congress. In contrast, the pending House bill makes all funding for Farm Bill energy programs discretionary. If those provisions became law, Congress would have to appropriate money each year.

“The House bill would allow the programs to continue on paper with an annual appropriation, but provides no mandatory funding to operate the programs,” says Olsen. That could result in “some very gutted programs.”

“There’s still some major gaps between the two bills,” says Goule. “But the most important thing we can do is get both bills passed, so that we can work these differences out in conference.”

Where the money goes

Examples of projects in the Midwest include solar panels for Pinehold Gardens in Wisconsin, wind power for Nobles Cooperative Electric in Minnesota, a geothermal heat system for the Southern Iowa Electric Cooperative, an energy curtain for greenhouses at Green Circle Growers in Ohio, and an anaerobic animal waste digester at Hunter Haven Farms in Illinois.

Projects like animal waste digesters can be a “huge win” because they have benefits beyond producing energy, notes Matthew Roberts, an economist at The Ohio State University’s Department of Agricultural, Environmental, and Developmental Economics.

“The biggest issue with siting animal facilities in the United States is odor, and digesters do a lot to solve that,” says Roberts. They ease wastewater problems as well.

BCAP encourages the production of crops for biomass fuelstocks, while the Biorefinery Assistance Program helps with technologies and facilities to make them into fuels.

“We should think about this like a children’s pop-up book,” says Bobby Bringi, President and CEO of MBI International. That Michigan nonprofit company develops bio-based technology for commercialization.

“We need the markets, the biomass supply chains, and the technologies to all be developed in a coordinated manner, and then when you turn that page, they need to all be able to go up together.”

Crop residues, such as corn stover, are an “underutilized resource,” says Bringi. “There is a great deal of interest to try to upgrade this nonedible biomass and also use that material as a biorefinery feedstock.”

The Midwest already produces tons of crop residues, reports the National Renewable Energy Laboratory. Using them for fuel or other products would give farmers another revenue stream for nearly the same effort.

Other potential fuelstocks, such as giant miscanthus and sawgrass, might grow on more marginal lands. Viable technologies and markets would expand uses for farm acreage in a sustainable way. The whole biofuels industry would benefit too.

“Any time you can diversify input feedstocks, it’s going to be a more economically sustainable proposition,” says Roberts. Relying on one crop, like corn, makes the industry “more vulnerable” to poor growing conditions, such as 2012’s drought.

“The next two weeks are going to be very telling,” says Goule. He notes that both the House and Senate bills provide less government spending. Both reduce the deficit, and both make significant reforms.

“This is a yes vote for both Democrats and Republicans that helps rural America,” stresses Goule.

“These programs have always enjoyed bipartisan support,” adds Olsen. “They’re good for the farmers, for rural communities, and for the country.  It’ a win-win-win.”

Correction: An earlier version of this story misstated the name of the Rural Energy for America Program.

The Environmental Law and Policy Center is a member of RE-AMP, which also publishes Midwest Energy News.