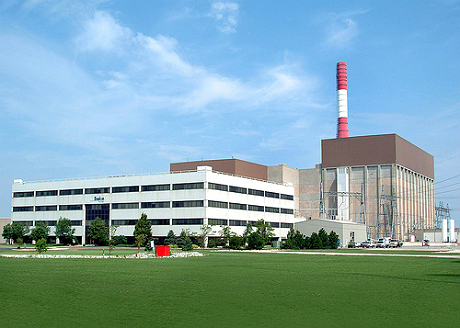 The LaSalle nuclear plant in Illinois. (Photo via NRC)

Exelon Corp. is scrapping expansion plans at nuclear plants in Illinois and Pennsylvania because of waning demand for electricity and competition with subsidized wind generators.

The country’s largest owner of nuclear reactors announced Wednesday it would sideline plans to add capacity to its LaSalle nuclear plant 75 miles southwest of Chicago and its Limerick plant 20 miles northwest of Philadelphia in a filing with the Securities and Exchange Commission.

Exelon has added about 1,400 megawatts of power to the grid by conducting “extended power uprates” at its nuclear plants, a process that involves installing larger pumps and valves with greater capacity to increase a reactor’s output by up to 20 percent.

That process at the LaSalle and Limerick plants, however, was derailed by market conditions and cheap wind, and Exelon has instead decided to take a $100 million hit in the second quarter, according to the filing.

“We removed these previously deferred extended power uprate projects from our program in response to market conditions and artificially depressed power prices resulting from subsidized wind energy,” Exelon spokesman Paul Elsberg said in a statement. “Extended power uprates are large investments with paybacks toward the end of plant life, and in this instance, we decided that the risk involved did not provide the necessary returns.”

Exelon has been front and center in the debate over whether the government should offer incentives for wind power, and last year was ousted from the American Wind Energy Association over its opposition to extending the production tax credit, a position that put it sharply at odds with the rest of the industry.

The utility’s executives have said wind energy tax credits are allowing companies to give away power for free or at negative prices at a time when gas supplies are historically low. Such factors, Exelon has said, are making it harder for nuclear reactors to compete in competitive markets (E&ENews PM, Nov. 27, 2012).

Exelon is mainly concerned with the federal tax credit of 2.3 cents per kilowatt-hour, which has allowed wind generators to pay consumers to take their electricity at certain points of low demand and excess capacity, such as overnight.

The industry won a one-year extension to the PTC in January and is now focusing on a longer-term strategy that doesn’t depend on the boom-and-bust reliance on federal support. Ongoing negotiations over comprehensive tax reform, which could include a PTC phaseout, are also a focal point (Greenwire, May 24).

AWEA took issue with Exelon’s reasoning today. “Exelon continues to use wind as a scapegoat for its significant financial woes,” said Rob Gramlich, AWEA’s senior vice president of public policy. “They made a losing bet on power market prices, which their earnings reports describe quite clearly. That is not a policy issue, it is a market issue unique to that company.”

Even so, Exelon continues to have a strong position in nuclear power, and Elsberg said the company is still on track to add capacity at its Peach Bottom plant in Pennsylvania and its Braidwood plant in Illinois for an additional 200 MW by 2016.