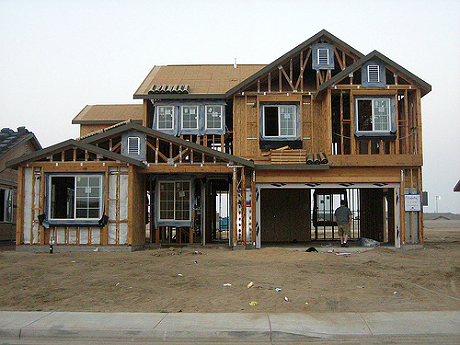 Home buyers in Minnesota can now get a peek under the siding. (Photo by Amy Doran via Creative Commons)

Like an MPG sticker in new car windows, a new home energy efficiency rating is about to start showing up on real estate listings in the Twin Cities.

NorthstarMLS, whose database lists home sales for Minnesota and western Wisconsin, introduced a new field this month for sellers to add a home energy efficiency score.

Home Energy Ratings System, or HERS scores, have become an industry standard for measuring a home’s efficiency, from the furnace to attic insulation.

The new feature will let Realtors, and eventually the public, search and sort home listings based on their efficiency rating. It also added a field to note other green certifications.

The listings service says the move is in response to growing awareness about energy costs, which for an average U.S. homeowner exceed property taxes and homeowners insurance.

“I don’t think consumers would think to buy a car without having an idea of what your mileage is going to be,” said James Vagle, executive director of MN Green Path, a Twin Cities green-building program.

And yet home buyers have historically had relatively little information about how much they can expect to pay for heating and cooling after they move into a new home.

Utilities will typically disclose the high, low and average bill for the past year, and sellers sometimes provide copies of recent bills if asked, but they can say as much about the owner as the home.

HERS scores give an objective measure of how leaky or tight a home is and how efficient its heating and cooling systems are based on a series of tests and inspections.

Residential Science Resources in Eagan is the largest HERS rating organization in the Twin Cities, scoring more than 200 homes per month, mostly new construction.

Account executive Ross Anderson said the process starts before the builder breaks ground. Building plans are entered into a software program that projects the home’s likely energy use.

Inspectors visit the construction site at least twice to review framing and insulation. After the home is completed, infrared cameras, blower door and duct blaster tests are used to confirm the rating.

A standard home built to meet the 2004 International Residential Code gets a score of 100. A home that produces as much energy as it uses gets a score of zero. The lower the score, the more efficient.

In Minnesota, the energy code is tougher than the 2004 standard, but so are the winter heating seasons. A standard new home built today in the state scores around 80.

Older homes can get a HERS rating, too, but because they were built to older codes are unlikely to have a good score without significant upgrades.

Most homes are not rated, though the inventory of homes with HERS scores is growing, especially for new construction.

This spring, in the Builders Association of the Twin Cities’ most recent Parade of Homes showcase, about 30 percent of homes on the tour had a HERS score.

Vagle, who is also public policy director for the Builders Association of the Twin Cities, said home builders are anticipating growing demand for the efficiency score.

“We see value in supporting that apples-to-apples comparison,” Vagle said. “Consumers are going to want to have this.”

NorthstarMLS is also following the lead of other regions, where homes listed with green certifications have sold for a premium, Vagle said. Other states to include HERS scores in home sale listings include Illinois, Nebraska, Arizona, Colorado, and Florida.

Anderson said his company’s ratings business is growing, and that he expects it could surge if Minnesota adopts a proposed building code update that would require blower door tests on new homes.

A good HERS score can potentially increase the value of a new home, too. Anderson said appraisers for new homes have been more willing to incorporate the added value of efficiency when the builder can show a third-party certified rating.

Whether the scores raise the value of homes in the eyes of Twin Cities house hunters remains to be seen.

Samantha Strong, founder of a Minneapolis realty, Metamorphosis, that specializes in sustainable homes, said even among her progressive clientele, HERS isn’t a well known metric.

“You have people who geek out on it, but the reality is the general public just wants a house that’s in a good neighborhood that’s safe and that gives them warm fuzzies,” Strong said.

Strong hopes the ratings catch on, and thinks they might if homes listed with HERS ratings end up selling for more in less time than other homes.

Gaining traction may be tough in the short term because of the lack of homes on the market today compared to the number of prospective buyers. Sellers have little incentive to pay for detailed energy reports, and buyers have little time to request information or else they risk losing out to another bidder.

“It’s a tough sell right now,” Strong said, “but I’m sure we’ll hit more of a stable market at some point in the next few years, and then it will help differentiate your home.”