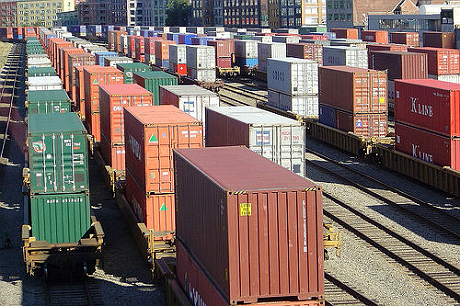 The nation’s truck-centric freight industry can modestly trim energy use through such tactics as lower speeds, less idling and more efficient packing.

However, substantial cuts in the fuel used to transport the nation’s goods will require a fundamental rethinking of the way products are moved to market, with a likely shift away from trucks and towards trains. That’s the major conclusion of a study recently published by the American Council for an Energy-Efficient Economy.

In many minds – and in Washington D.C. – the freight industry tends to be equated with big rigs rumbling down the nation’s highways, according to Therese Langer, the ACEEE’s transportation program director and one of the authors of the study. The federal system for funding transportation “essentially treats the freight system as a trucking system, with almost no attention given to any other freight mode,” she said.

In this issue as in many others, according to Langer, money does the talking when it comes to federal policy.

“Even more than the trucking industry,” she said, “it’s the highway lobby that throws its weight around.”

When Congress next considers how to fund transportation, in 2014, Langer said, “It will be essential for the national freight strategy to include modes other than highways.”

Trains and barges, while more limited in where they can go, are far more energy efficient than tractor-trailers, which typically travel 6 or 7 miles on a gallon of diesel. Although calculations vary, a U.S. Department of Energy study estimated that in the year 2000, barges were twice as efficient per ton-mile as big trucks, and that trains were nearly 12 times as efficient as trucks.

Between 1980 and 2000, according to the same study, ton-miles traveled by truck nearly doubled, while rail ton-miles grew a bit more slowly and barge ton-miles actually fell by almost one-third.

Intermodal transportation – where large shipping containers or entire truck trailers are transported by rail or water for most of their journey and by truck at the endpoints – will be the key to making significant reductions in emissions, according to the study.

Energy use in the freight industry matters because the transport of goods accounts for 18 percent of the oil burned and 9 percent of the carbon emitted in the United States, according to the U.S Energy Information Administration. The agency projects that between now and 2040, emissions from light-duty vehicles will decrease by .9 percent annually while those from freight trucks will grow by about 1.2 percent annually.

Significantly, new federal regulations approved in 2011 will impose the first-ever fuel-efficiency standards on tractor-trailers, beginning with the 2014 model year. Langer said freight trucks in 2030 will use 10 percent less fuel than would otherwise have been projected for that year.

The Department of Energy is partnering with several truck manufacturers on a “SuperTruck” project. The aim is a 50 percent increase in fuel efficiency of heavy-duty trucks by 2015.

To date, trucking companies to varying degrees have invested in efficiency improvements. Werner Enterprises, which runs about 7,200 big trucks and is known as one of the more energy-efficient trucking firms, has added rounded metal “skirts” that improve truck aerodynamics. Many companies have auxiliary power sources that provide heating and air-conditioning in the cab, meaning the truck’s engine can be turned off.

And in the manufacturing realm, some companies are streamlining packaging, according to Roeth, which will allow shippers to stuff more actual cargo, and less hard plastic casing, into a trailer.

Still, according to the studies Langer reviewed, these kinds of changes make only marginal reductions in the huge amount of fuel consumed by the nation’s tractor-trailers. Reducing idling, for example, is estimated to cut total fuel use by perhaps 1 percent. Better loading, packaging and routing might shave off another 3 percent. Increasing the size of trailers gains another 1 percent.

The five studies that Langer and Foster reviewed included three transportation studies, conducted by two federal agencies and one private consulting firm, and two global supply-chain studies, one by the World Economic Forum and the other by a consulting firm. They generated a wide range of estimates of potential savings from changes including those listed above, and excluding the expected impact of the new truck fuel-efficiency standards. The highest estimate, assuming aggressive measures, was 37 percent. The lowest: zero. And most of the estimates were below 10 percent.

In light of the small gains, Langer and Foster looked elsewhere for more energy savings, and set their sights on what’s known as “modal shift” – using a more efficient alternative, primarily freight trains. Although the five studies estimated no more than 7 percent savings from “modal shift,” Langer believes the potential is actually much greater.

Not as easy as it sounds

Intermodal shipping is gaining momentum, according to some people in the trucking industry. But it remains complicated.

When you load a truck and send it halfway across the country, you pretty much know when it’s going to arrive, said Matt Parry, senior vice president for logistics at Werner Enterprises. But trains tend to be less predictable.

Sometimes a load “will sit in the rail yard” for a time, said Ron Sucik, a private freight consultant. And while some commodities can sit without suffering, he said, others cannot.

Intermodal transport also requires additional loading and unloading, which also increases shipping time, Parry pointed out. Intermodal tends to work best for loads moving at least 600 miles, and preferably 1,000 or more. However, Parry said, a large proportion of freight in the U.S. moves fewer than 250 miles.

However, trucking faces other challenges. One is the rising cost of diesel fuel, Parry said. The other is a driver shortage, especially for trips that require being gone from home for extended periods, Sucik said.

Rail traffic is growing, and intermodal business currently accounts for about 2 percent of freight tonnage in the U.S., according to Sucik. Railroads are building more intermodal terminals and achieving higher speeds overall.

Some shippers remain resistant to intermodal, Sucik said, while others are dabbling in it.

Parry calls himself “bullish on the growth of intermodal and rail.” In the past three years, he said, Werner has tripled the amount of freight it moves intermodally. The price of diesel has driven that, and he predicts will continue to do so.

Sucik foresees growth as well, but likens the move to intermodal to a snowball “rolling down a hill.