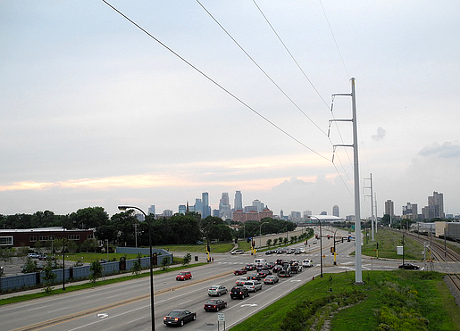 A long-term contract that allows Xcel Energy to use public right-of-way in its corporate backyard is set to expire at the end of next year.

Whether and under what terms the city of Minneapolis renews the deal could depend in part on the outcome of a wide-open mayoral race.

Six of the nine contenders shared their thoughts on the utility agreement Tuesday at a candidate forum on clean energy issues. (The event’s co-sponsors included Fresh Energy, where Midwest Energy News is based.)

Utility franchise agreements have historically been renewed with little fanfare or controversy, but Boulder, Colorado, may have changed that. In 2011, voters there authorized the city to replace Xcel Energy with a municipal utility if the company wouldn’t meet their clean energy demands.

While Boulder continues to study the costs and logistics for buying Xcel’s infrastructure in the city, a citizens group called Minneapolis Energy Options has been campaigning since last year to put the City of Lakes on the same path if necessary.

At the forum Tuesday, most of the candidates appeared to agree the city should study its options, but they had a range of reservations about what should happen next.

City Council Member Betsy Hodges offered the firmest support for the effort. She was the first to support the citizen campaign, and while she’s unsure whether municipalization makes sense for Minneapolis, she said the city should know its options before it negotiates another long-term franchise agreement with Xcel.

“We are going to need to push them, and push them hard, and we need every tool in the toolbox to do that,” Hodges said.

In April, the City Council voted to spend up to $250,000 on an “energy pathways” study, examining how the city could use utility partnerships, franchise agreements or potentially municipalization to make progress towards its goals for sustainable energy, improved air quality, equity and green jobs.

Whether the city could advance those goals and maintain reliable, affordable electricity better with a municipal utility than with Xcel Energy is a question that will require several years and millions of dollars to fully study. Boulder, a city one-fourth the size of Minneapolis, has so far spent $3.3 million studying municipalization.

Other candidates expressed sympathy for the citizen campaign’s goals but focused their comments on concerns about the costs, feasibility and strategy.

Mark Andrew, founder of a green marketing company, said he supports Minneapolis Energy Options’ objectives but has doubts about its strategy for a possible ballot measure in November before the public understands the issue.

“Every candidate for mayor knows that it’s going to take $350,000, at least, to run a citywide campaign. We have four months until the election,” Andrew said.

Andrew said the group needs more funding and more grassroots support or else they would risk a failed ballot referendum in the fall.

“We’re not naive about the situation,” said Dylan Kesti, Minneapolis Energy Options’ campaign coordinator. The group hired a financial director last week and is on its way to raising more than $300,000 for its campaign. (Initial funding, Kesti said, includes a grant from RE-AMP, which also publishes Midwest Energy News.)

Kesti said they already have support from enough City Council members to put the measure on the ballot in November, and to Andrew’s concern, Kesti said, “Historical precedent says organized people can beat organized money.” He said he was encouraged that most of the candidates support studying the city’s options.

Dan Cohen, a former City Council member in the late 1960s and early 1970s, was the only candidate to oppose the effort with a flat-out “No.”

“If we end up buying this utility, not only will it cost billions and billions of dollars,” Cohen said, “it would crowd out … every other capital investment for years and years.”

Xcel Energy told the St. Paul Pioneer Press last week that the cost for the city to buy the utility’s infrastructure would be “a big number,” potentially billions of dollars. Cohen said that type of investment would take away from other needs like roads and bridges.

Don Samuels, a current City Council member running for mayor, said he supports the effort to study the issue, but he, too, has concerns about the costs.

“I don’t think we can just write a blank check,” Samuels said.

Cam Winton, a Republican candidate who works as an attorney for Duke Energy’s wind and renewable energy division, said he would push for a shorter franchise agreement with Xcel, around five years instead of the previous 20-year agreement.

“Once we’ve re-upped under a much shorter time frame,” Winton said, “I absolutely support taking time to research our options. I support looking at what Boulder and other cities have done, and I support crunching the numbers to see what we can do and at what cost.”

Winton also said he believes increasing the use of renewables in the city will increase costs, and that clean energy supporters should be candid about that fact with the public.

Winton acknowledged during the forum that Xcel Energy is a client of his employer, Duke Energy, which operates and maintains wind farms for the utility. Andrew’s green marketing company, GreenMark, also lists Xcel Energy has a recent client.

Jackie Cherryhomes, another former City Council member, might have expressed the median view of the six candidates who attended the forum.

“Frankly, I have a little bit of nervousness at the city taking over something as major as an energy company,” Cherryhomes said. “But I think we should wait and see what the study reveals.”