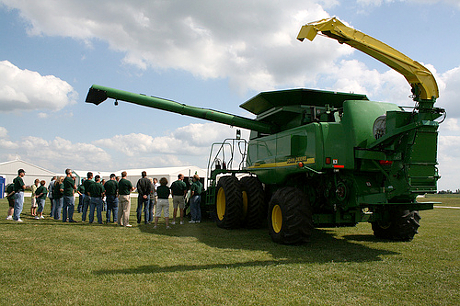 While the talk in D.C. turns to President Obama’s climate proposals, it’s back to the drawing board for several federal renewable energy programs, following the House rejection of the Farm Bill last week.

Unless Congress passes another law or extends the current one, the Biomass Crop Assistance Program (BCAP), Rural Energy for America Program (REAP), and other energy programs will end on September 30.

The federal Farm Bill covers a wide range of programs including food stamps, crop insurance, conservation, and more. The Senate passed its $955 billion bill to reauthorize the Farm Bill earlier this month. The House voted down its $940 billion version last Thursday by a vote of 195-234.

Programs for clean and renewable energy have been part of the Farm Bill since 2002. REAP provides grants and loan guarantees for a wide range of renewable energy and energy assistance projects. The nationwide program supports many projects in the Midwest.

“Not only do renewable energy projects get started, but the monies that are in these programs leverage millions and hundreds of millions of dollars of private investment in rural communities,” says Steve Falck, a Senior Policy Advocate at the Environmental Law & Policy Center (ELPC is a member of RE-AMP, which also publishes Midwest Energy News.)

BCAP and the related Biorefinery Assistance Program aim to develop biomass energy. Corn stover, giant miscanthus, sawgrass, and even fast-growing poplar trees are potential cellulosic fuelstocks that farmers can provide in the Midwest.

“If you’re close to where your feedstock is grown, that just makes the end product more competitive,” notes Falck.

Energy programs are a “tiny, tiny part” of all Farm Bill programs, notes Roger Johnson, President of the National Farmers Union. Even with less than one percent of the funding, however, he says they play a vital role for rural America.

“If you just think about what has driven economic development in the rural parts of America over the last ten years or so, in almost every case, it is renewable energy programs,” says Johnson.

In last week’s vote, Democrats cast 172 of the no votes, largely as a protest against the bill’s $20.5 billion in cuts to the federal food stamp program. In addition, 62 Republicans also voted against the bill—mainly because they wanted even more cuts. The bill needed 215 votes to pass.

“We’re pretty deeply disappointed,” says Johnson. “I still believe it would have passed had it not been loaded down with poison pill amendments.”

The House can still revisit the Farm Bill in various ways and forms. The last Farm Bill expired in 2012, but was extended through September 30. Now just over three months remain before the end of the fiscal year.

“We would have hoped that the bill, when passed, would have gone to conference, and we could have seen some mandatory funding for the energy title,” says Falck. “That would be our preference.”

If a reauthorization or temporary extension didn’t include mandatory funding, ELPC and others would then be “scrambling” to get Congress to make appropriations, says Falck.

Energy programs stand to suffer the most if Congress doesn’t pass either a multi-year renewal or short-term extension. Impacts on farm commodity prices would take several months to show up. However, energy programs could disappear as of October 1.

“These are programs about the future, and they are the basis for most of the economic development in rural America. And they don’t cost that much.”

Ironically, Republicans who voted no because they wanted food stamps slashed even more could see that program continue without cuts, notes Johnson. Other programs would revert to their status as of 1949. Meanwhile, a variety of innovative programs for energy and other projects could end.

“Congress has become so dysfunctional, you end up with policies that are very, very old and outdated. And the newer, more forward-looking ones are the ones that are eliminated,” says Johnson.

“No matter which direction it goes, we want to be prepared,” says Falck.

“There’s a pathway to passing a Farm Bill,” insists Johnson. “They may try everything possible that won’t work first. But then they’ll do it.”