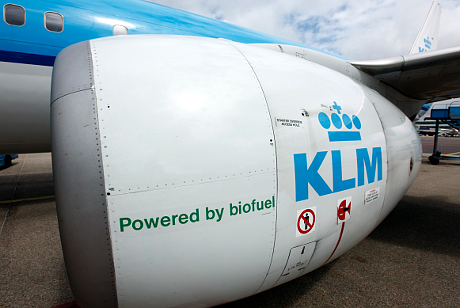 Editor’s note: This story was updated to include more information about KLM’s biofuel-powered flight.

While an experimental solar-powered airplane recently made headlines for its cross-country journey, getting a commercial jetliner off the ground still requires far more energy than any electrical source can provide.

So for airlines that want to reduce their reliance on oil, the only option is to develop a more sustainable jet fuel.

In coming years jets taking off from Midwestern airports could be powered at least in part by corn stalks, woody debris or even municipal garbage, meaning a significant reduction in carbon emissions, significantly lower fuel costs, benefits for farmers and the creation of thousands of jobs.

But getting to this point will likely involve coordinated government support, risk-taking private investment and strategic research and innovation.

That’s the basic takeaway of a report released Thursday by the Midwest Aviation Sustainable Biofuels Initiative (MASBI), which was founded in 2006 bringing together more than 40 corporations, government entities and non-profit institutions.

Speakers noted that they’ve already proven aviation biofuels are technically feasible and safe. More than 1,500 flights have been powered by a blend of biofuels and diesel jet fuel, and last summer U.S. Navy aircraft did various maneuvers off the coast of Hawaii on biofuel-diesel blends.

And earlier this year, KLM Royal Dutch Airlines began weekly biofuel-powered commercial service between Amsterdam and New York City. The KLM flight was powered by fuel developed in part by Honeywell UOP, which has developed technology to turn natural oils from non-edible crops and waste into its Green Jet Fuel.

The processes currently used to create aviation biofuel mean it must be blended with diesel, but in the future it would be possible to run existing jet engines on 100 percent biofuels, experts said.

“Any fuel produced has to fit into the existing infrastructure,” said Glover — in other words, Boeing won’t be inventing new jet engines. “We’re coming up with chemical formulas to hit that mark.”

But for aviation biofuels to ever really take off, the report notes, the cost of growing, refining and transporting the fuels must be reduced and efficiency increased significantly. MASBI proposes that government incentives will likely be necessary to get aviation biofuels to the point of financial viability, and policy changes will be key to helping private interests make biofuel investment work.

The report indicates that supporting and promoting aviation biofuels in one region – notably the Midwest – may be the best way to develop and scale up technologies so that the industry can ultimately be profitable and feasible on a national or global scale.

Glover noted that studies similar to MASBI’s are being carried out in the Pacific Northwest, Brazil and Mexico, and experts in those regions have already learned from the Midwestern experience.

Industry representatives involved in MASBI apparently feel it is worth pursuing biofuel options despite the uncertainty and cost in part since the price of jet fuel has almost tripled since 2000, and demand in the Midwest is expected to increase in coming years, according to the report. Reducing carbon emissions is also a major motivation, especially since airlines have voluntarily committed to reduce their emissions 50 percent by 2050, based on 2005 levels.

Initiative members chose nine feedstocks as the most promising, including corn, corn stover (the part left over after harvesting), pennycress, wood residue from logging, the hardy crop camelina and municipal or industrial waste. Industrial waste gas – the type burned off in flares at steel mills and other factories around the Midwest – could also be captured and liquefied to power jets.

The report also describes various technologies that turn a feedstock into fuel. These include fermenting plant sugars into alcohol; turning carbon-rich materials into syngas that can be used as fuel; and turning feedstocks like corn stover and wood into fuel through the process of “direct liquefaction pyrolysis.”

A map in the report shows the Midwest and Northeast as among relatively few areas worldwide ideal in temperature, sunlight and rainfall for growing biofuel feedstocks. Much of the U.S. is considered too hot for ideal production, according to the map.

Though the Midwest may be climatically suited for biofuel feedstock production, it is not easy to convince farmers to grow a novel crop solely for energy. The report notes that farmers will need confidence that their crop can be sold, and also the technology and know-how to reach a successful harvest. Insurance of the type commonly available for food crops will be essential.

The report says energy crops may only be profitable on idle or unused land, which describes only three percent of farmland in the U.S. North Dakota and Kansas have the greatest percentage of idle land, the report says, while Michigan, Indiana and Ohio have the least. Wisconsin and Illinois are also on the low end.

The report says intentional financial mechanisms must be developed to make biofuels work for farmers, refiners and airlines – for example, long-term contracts that lend stability, or vertical integration where for example refineries would also invest in growing feedstocks.

MASBI notes that “waste products” like corn stover and industrial gas may be more cost-effective than food crops like corn and sugar beets, since they wouldn’t compete with demand for food.

On June 4, United Airlines inked a deal with the company AltAir Fuels to retrofit a petroleum refinery near Los Angeles to produce commercial-scale aviation biofuels from non-food crops and agricultural waste, making it the first refinery in the world to produce both diesel and biofuels, the company says.

Jimmy Samartzis, United Airlines managing director of global sustainability, said the company is committing to purchasing 15 million gallons of fuel over three years from the plant, at a price “that works for us and for them.” He said it is unlikely United would invest directly in fuel or feedstock production, but airlines can decrease the risk for such producers through long-term contracts and other ways of structuring purchases.

“Looking at cost and risk both with fuels and climate, we’ve seen significant volatility and significant increases,” said Samartzis. “So we’re diversifying our portfolio. We’re at a great point in time to transition to commercial scale.”

MASBI analyzes the funding potential of venture capital, angel investment, private equity and public debt and equity. It notes that venture capital investment in the clean tech sector dropped by a third between 2011 and 2012. In total number of venture capital deals, biofuel ranks below solar, energy efficiency and transportation projects but above smart grid, recycling and energy storage sectors.

The report recommends measures to help reduce the financial risk of investing in biofuels, including the streamlining of government approval processes, collaboration to create a pool of financing for biofuel projects, and revision of federal policies that currently favor fossil fuels over alternatives.

The report notes significant milestones that have already been achieved, including the operation of pilot aviation biofuel plants and the 2010 flight of the U.S. Navy’s Green Hornet, powered by a 50-50 blend of conventional fuel and camelina-based biofuel.

At the report launch, U.S. Navy deputy assistant secretary of energy Tom Hicks said that the switch to biofuels is “not part of some broad environmental agenda” but rather the Navy’s attempt to deal with fuel costs of about $500 million a year, and to decrease “vulnerabilities” created by reliance on foreign oil.

“We must look at energy differently,” said Hicks. “In 2020, half our energy will come from alternative sources.”