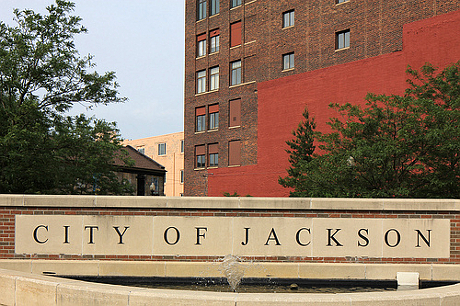 Officials in Jackson, Michigan turned down a solar deal that a developer claimed would reap the city a huge return on its investment. (Photo by Daniel X. O'Neil via Creative Commons)

Installing solar panels or wind turbines on city or county-owned property can be fraught with more complexities than doing so on private land.

That was demonstrated earlier this month when the City of Jackson, Michigan, opted not to move forward on what appeared on the surface to be a slam-dunk good deal for the municipality.

The local utility, Consumers Energy, was offering to pay 23 cents per kilowatt-hour produced by solar panels to be installed at the city’s wastewater treatment plant. That’s close to twice what Michigan utilities typically charge their customers per kilowatt hour. Consumers said it would pay at that rate for 15 years.

The city initially considered spending about $500,000 to install the panels, then decided it would be hard to make a case.

“Cities always have a scarcity of resources,” said John Farrell, a senior researcher specializing in energy policy for the Institute for Local Self-Reliance. “Even if it’s a short payback, they don’t tend to do it … it’s competing with police and fire and the library.”

After deciding against paying for panels upfront, the city considered another approach: contracting with a third party that would pay upfront for the panels, collect the tax benefits and payments from the utility. That contractor would then pay a monthly lease to the city for use of the treatment-plant property.

Mark Olinyk, a Jackson solar installer who was interested in the contract, said the city would have earned in the neighborhood of $7,000 a month – simply for providing a space for the panels. And at the end of 15 years, the city would be given the panels, which Olinyk said would have generated power – and income – for another decade or more. Olinyk put the total profit over 30 years at about $660,000.

To paraphrase Olinyk: it was a no-brainer.

Not to Jackson’s city manager, who was skeptical of the $660,000 estimate. The city solicited lease proposals and decided to scrutinize three of them.

“He may be right; he may be wrong,” Burtch said of Olinyk. “These leases have an extreme amount of risk. There are a number of hidden costs here.”

He was concerned, for example, about whether the city would be expected to mow the grounds, and whether it would be expected to insure the panels, even though it didn’t own them. The city’s policy under such circumstances is to leave the insuring to the other party, he said.

All in all, Burtch explained, the city had limited time to study the leases and decide on one, and it was worried about the possible unanticipated consequences of signing one of them.

“It comes down to capacity,” he said. “Do they have legal counsel that’s familiar with these contracts? They’re new and strange and lengthy and complex. I’d assume the legal counsel and city council had not seen this, and may not have had enough time” to carefully review the leases, he said. “It’s a very real challenge.”

There’s also the issue of navigating unfamiliar utility regulations. An Iowa utility challenged a decision by the City of Dubuque to contract with a third-party to install solar panels, and to sell the resulting power to the city. The utility claimed that the arrangement would infringe on its monopoly. An Iowa district court in March ruled that no, the contractor was not acting as a utility.

Local governments, Farrell said, might fear the possibility of a similar lawsuit.

On a number of fronts, Johnston said, “It comes down to risk – and cities tend to be risk-averse.”