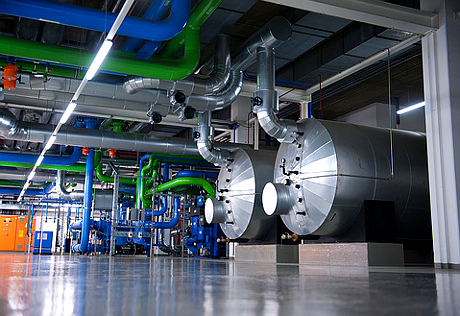 A combined heat and power unit in Germany. (Photo by Bilfinger SE via Creative Commons)

While experts say Ohio’s industrial infrastructure offers vast opportunities for energy production from waste heat, that potential could go untapped if efforts to roll back the state’s renewable standard succeed.

Ohio still has no rules to implement its law on combined heat and power and waste energy recovery, enacted last year as part of Senate Bill 315. As investors and companies wait for rules, legislative action threatens the law’s benefits.

Combined heat and power, or CHP, uses a single fuel to make heat and electricity. Waste energy recovery, or WER, captures waste heat or other energy for further use. Heat sources include things like cement kilns, coke ovens, blast furnaces, and other industrial equipment.

The law says it shall “take effect immediately.” However, the Public Utilities Commission of Ohio (PUCO) has not yet issued rules on exactly what projects qualify as combined heat and power or waste energy recovery.

Until then, companies and investors hesitate to commit money to projects.

As with most capital projects, companies must consider costs and benefits.

“The key thing is that it’s got to be economical for the customer,” says Shonodeep Modak, a spokesperson for GE Gas Engines. The company’s Cincinnati plant makes gas turbine engines for combined heat and power as an extension of GE’s jet airplane engine business. GE makes waste heat recovery systems too.

Saving on energy bills is one big financial benefit of combined heat and power and waste energy recovery. Both types of technology boost available energy output. Customers spend less on fuel. Or, they buy less electricity from outside sources.

Selling those credits can thus provide revenue and shorten the time for recouping project costs.

“Even without the incentives that are going to come, it makes economic sense for a factory to find ways to reduce costs,” says Zdankiewicz. “This allows them to make a decision to say it’s more economically feasible.”

Contract arrangements for projects vary. Often companies sell system equipment to customers, who then own and operate it.

In contrast, Chicago-based Recycled Energy Development (RED) installs systems for customers at its own expense and retains ownership of the equipment. It makes money by sharing in customers’ cost savings and selling credits for renewable energy and energy efficiency.

For RED, Ohio projects are risky until the company knows what will qualify under state rules.

The same holds true for companies using their own funds to buy and install equipment, she says. “They can’t justify these projects unless they understand what the regulatory treatment is going to look like.”

The state’s large industrial base and many commercial and industrial facilities rank it in roughly fourth place nationwide for potential energy from combined heat and power. Yet Ohio is in 44th place for the actual installment of CHP technologies, says Demeter.

“These are clean and highly efficient power options for electricity customers,” she adds.

While customers save on energy bills, combined heat and power and waste energy recovery provide high-tech jobs at companies like Echogen, General Electric, and RED. The technologies yield environmental benefits too.

“The power is generated right there on site, and therefore it’s much more efficient and a much smarter way to use that fuel source,” says Demeter.

Fuel for combined heat and power can come from a utility or sometimes even onsite. A Campbell Soup facility at Napoleon, Ohio, runs its CHP system with biogas from organic waste.

“In this particular situation it actually helps reduce a waste stream for the customer,” says Modak.

Waste energy recovery systems require no extra fuel. “So from an environmental standpoint, they’re on a par with other emission-free technologies,” says Demeter.

“This is a piece of legislation that will last 100 years in Ohio,” Republican Gov. John Kasich said when he signed SB 315. One year later, the future of Ohio’s combined heat and power and waste energy recovery law is questionable.

SB 58 provides no specifics on how the standards could change. However, Seitz has a history of opposing Ohio’s renewable portfolio standard. Two years ago, Seitz co-sponsored a bill that would have repealed the law completely.

FirstEnergy Vice President Leila Vespoli testified against the standards, along with lawyer James Taylor of the Heartland Institute in Chicago.

Seitz plans to introduce another bill with specific changes after the SB 58 hearings end. If lawmakers ultimately relax or repeal the standards, incentives for combined heat and power and waste energy recovery could dwindle.

“Here we are not even twelve months later, and they want to remove these standards that they just used to encourage more CHP and waste heat development in the state,” says Demeter. “We think it’s taking an opportunity before it’s even been fully realized.”

Even if standards ultimately stay in place, the current legislative process postpones companies’ commitment to projects.

“It’s just creating more uncertainty that there is this process underway to examine the law,” says Mullarkey. “From the perspective of our company, it makes Ohio look very uncertain.”

The Ohio Environmental Council and Union of Concerned Scientists (UCS) are members of RE-AMP, which also publishes Midwest Energy News.