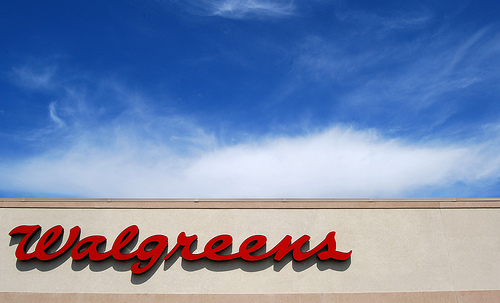 While big-box retailers like Walmart and Ikea are nationally known for their adoption of renewable energy, the drug store chain Walgreens is quickly joining their ranks.

The Deerfield, Illinois-based company is already one of the nation’s retail leaders in the installation of rooftop solar panels. And the company recently announced it will be working together with Chicago-based solar developer SoCore Energy to put solar panels on top of more than 200 stores located primarily in California and the Northeast. Walgreens already has solar panels on about 150 stores.

“We are committed to reducing our carbon footprint and leading the retail industry in the use of green technology,” said Thomas Connolly, Walgreens’ vice president of facilities development. Walgreens will provide the space for the panels while SoCore will own, operate and maintain them. The two companies launched their partnership in 2011 with a solar installation on 53 Walgreens stores in Ohio.

According to statistics gathered by the Solar Energy Industries Association, Walgreens ranked second last summer in the number of solar systems installed. It had 134, compared to Walmart’s 144. Walgreens ranked 10th among all commercial entities for installed solar capacity. At that time, Walgreens had installed enough solar panels to generate 8,163 kilowatts.

The nation’s leader, Walmart, a year ago had installed enough panels to produce about 65,000 kilowatts, and recently announced plans to install solar arrays on ten more stores in Maryland.

Walgreens estimates that the upcoming installation will produce about 13.5 million kilowatt hours annually, roughly equal to the electricity used in 1,400 homes.

The solar panels will likely reduce energy use only marginally in a given store, said Pierre Bull, a renewable energy policy analyst for the Natural Resources Defense Council, speaking from San Francisco. He calculated that the new panels might meet 10 to 20 percent of the energy demands in a typical Walgreens store.

The rather small size of a Walgreens building and rooftop – compared to, say, your typical Walmart or Costco – “is the limiting factor” in how much power Walgreens’ solar panels will be able to contribute to the overall energy picture, he said.

That said, Walgreens is “doing a lot with their lighting,” which accounts for a lot of the stores’ energy use, Bull said. The stores typically use energy-stingy 25-watt bulbs, for example. As the stores continue to reduce their overall electricity use, he said, “They could get their percentage (of energy derived from solar panels) up quite a bit.”

Walgreens picked states for this round of solar panels based on where it found the most generous financial incentives, according to a SoCore spokeswoman. And the company intends to continue adding solar panels to its 8,000 stores.

The falling prices of solar panels in the past few years have made solar energy ever more attractive, especially to large electricity customers like retailers, according to Bull. “It’s really cost-effective at that commercial scale.”

But cutting electricity use and the bill that accompanies it are just a couple of the benefits of Walgreens’ solar installation, Bull noted.

“To the extent that the solar panels are visible to customers, the visibility has an impact. People see the technology becoming more mainstream.”

And it could score green points for the company, a point probably not lost on Walgreens and the other companies on the solar bandwagon, he observed.

“Stores are very cognizant that customers are more eco-conscious than they were 10 or 15 years ago,” and they want to connect with that value system, he said.

“The visibility of solar makes that statement.”