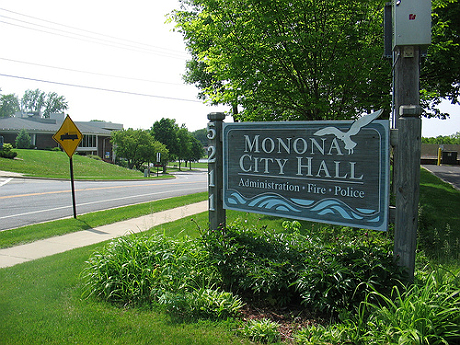 Monona, Wisconsin plans to install solar panels on its city hall and other municipal buildings. (Photo by Channel3000 Communities via Creative Commons)

Can a Wisconsin city buy solar power from someone other than its electric utility? A Madison suburb may soon find out the answer.

The Monona City Council discussed Monday what could be a first-of-its-kind solar project in Wisconsin.

A private company would install solar arrays on four municipal buildings at no upfront cost to the city. The installer would then own and maintain the systems over the life of a contract and sell the renewable energy credits they earn to the city of Monona.

“The city has committed to being an energy-independent community and increasing our use of renewables,” Monona project manager Janine Glaeser said, “and this looks like a good way to do that without the upfront capital costs.”

One possible hitch: Wisconsin law is unclear about whether so called “third-party-owned” solar systems, in which neither the customer nor their utility owns the panels, are legal in the state.

It’s a high-stakes question for the state’s solar industry — and its regulated utilities, which could see a flood of new competition if the model is accepted and price trends continue.

In states where third-party solar is specifically allowed, such as Arizona and Colorado, the arrangements have accounted for up to 90 percent of new installations, according to the Solar Energy Industries Association.

In Iowa, for example, Alliant Energy, along with other utility interests, took legal action to stop the city of Dubuque from buying solar power directly from a company that would own and manage panels on city buildings. Alliant has appealed a district court’s decision to the Iowa Supreme Court.

The argument by Alliant is third-party solar firms that sell electricity to customers should be regulated as utilities, and that the Dubuque project would encroach on Alliant’s exclusive right to provide electricity to the city.

The risk of protracted, expensive legal challenges from utilities has deterred third-party solar companies from setting up shop in Wisconsin, but the investor-owned utility that serves Monona has said it doesn’t intend to challenge the project.

“That’s an agreement that the city of Monona has with that vendor, and that has nothing to do with us,” said Steve Kraus, a spokesman for Madison Gas & Electric. “It isn’t anything special or different.”

Wisconsin solar energy advocates, however, are closely following the Monona discussion and believe it could produce a model for advancing third-party-owned solar in the state.

“This could be a breakthrough,” said Michael Vickerman, program and policy director for RENEW Wisconsin, a nonprofit that promotes renewable energy. “If the vote proceeds as we think — all indications are that the council will approve it — then we’ll have a template for how [others] can do this sort of thing.”

‘We are not selling electricity’

The Monona proposal calls for installing solar arrays on four city-owned buildings: city hall, the library, a public works garage, and the water utility building. The systems would produce up to 156 kilowatts, which would help offset the city’s electric bill.

The solar panels would be paid for, installed by and owned by a Colorado company called Falcon Energy, which as a for-profit business would qualify for federal tax benefits that are unavailable to nonprofits and government entities.

Under the terms being discussed, which are not final, Falcon Energy would lease the rooftop space for 10 cents per square foot. The city would pay Falcon Energy $130 per megawatt-hour for the renewable electricity credits, or RECs, associated with the project.

Nowhere in the contract is the sale of electricity mentioned, and that’s apparently by design.

Solar developer Kurt Reinhold, who has been working on the Monona project for the past two years, didn’t want to discuss specifics until it was a done deal, but he said in an e-mail that his company, Solar Connections, designs “REC service agreements.”

“Since we are not selling electricity, we should not be regulated as a public utility,” Reinhold wrote.

Monona City Attorney Bill Cole couldn’t be reached for comment Tuesday. The City Council is expected to vote on the contract at its Aug. 5 meeting, unless it decides to schedule a special meeting before then.

While the project may provide a template, it won’t set a precedent. Other utilities could still challenge similar projects in their territories, which is why RENEW Wisconsin is working to get a bill introduced in the fall to clarify that third-party solar leases are legal in the state.

“Our belief is that [if] we have enough politically powerful constituencies supporting this initiative, our sponsors will be encouraged by this broad base of support and will introduce a bill for a public hearing,” Vickerman said.

“We believe the Wisconsin renewable energy business community will enjoy substantial and sustained growth if allowed to use the same tools that are available in over 20 states,” the group’s petition says.

The petition also notes that states where third-party-owned systems are allowed have the most active markets in the country for small-scale renewables — something analysts at the National Renewable Energy Laboratory (NREL) confirm.

“If you look at the states with the most activity and the states that allow third-party ownership, there is a very strong overlap there,” said Michael Mendelsohn, a senior financial analyst with NREL’s Market and Policy Impact Analysis Group.

The upfront cost of buying and installing systems is one of solar power’s biggest barriers, Mendelsohn said. Third-party arrangements offer an alternative: a monthly payment that typically also covers repair and maintenance.

The arrangements also help homeowners, nonprofits and government entities benefit from federal tax incentives, such as accelerated depreciation, that are otherwise only available to for-profit businesses, he said.

While clarifying a third-party solar bill will be a priority, it won’t be the only one, he said. They plan to take Monona’s model to other municipalities, nonprofits and companies to try to advance third-party solar under the current law.

“We will encourage other companies and nonprofits to follow the city of Monona’s lead. Use the template of the contract and start sourcing electricity for yourself,” Vickerman said. “We’re not going to wait for legislation for the second of these arrangements.”