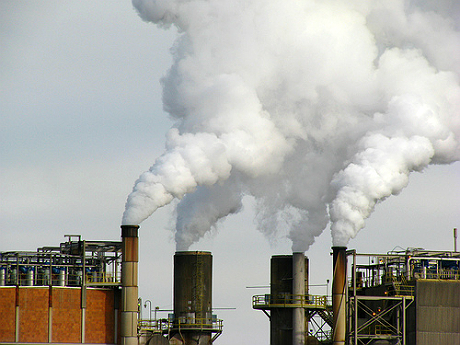 The sights of hulking, steaming paper and pulp mills – and the acrid smell they produce – are familiar to many residents of Wisconsin, Ohio and other Midwestern states. For much of the 20th century these mills were central to regional economies, employing hundreds of thousands of people and creating countless tons of paper products.

But the paper and pulp industry has suffered from global competition and reduced paper use driven by the digital revolution and other factors. Since 2002, more than 100,000 paper and pulp mill jobs – 30 percent of the total – have been lost nationwide.

But paper and pulp mills can improve their bottom line, remain financially competitive and retain jobs by adopting energy efficiency overhauls, while also significantly decreasing greenhouse gas emissions, according to a report released by the World Resources Institute this week.

“These investments can really help save jobs, since there’s been a lot of transition over the past 10 to 20 years,” said Nate Aden, a research fellow with the World Resources Institute’s climate and energy program. “There are still 350,000 people in the U.S. who are employed in pulp and paper, if these facilities invest in energy efficiency, we can help save those jobs by helping them compete and continue to operate.”

The 93 paper and pulp mills in the Midwest are older and less efficient than the nation’s fleet as a whole, the report says, hence they could stand to benefit even more by investing in efficiency overhauls. These include different procedures and new equipment for drying paper, bleaching and other parts of the pulping and paper-making process; and better maintenance of equipment like steam traps.

The report says such investments will pay off relatively quickly. Midwestern manufacturers could save $240 million annually if all pulp and integrated paper mills met the same efficiency standards as the top 25 percent of comparable U.S. facilities nationwide, as determined by the U.S. Environmental Protection Agency’s Energy Star program.

For example, the Flambeau River Papers mill in Wisconsin closed in spring 2006 because of high costs, laying off nearly 300 people and causing panic in the surrounding rural area. The mill was able to reopen later that year, however, with the owners investing heavily in new equipment and a biodiesel refinery.

It hasn’t been a smooth road, as a BusinessNorth.com story explains: the economic crisis, industry trends and the cancellation of federal and state loans have dealt blows to the mill. But the company has survived while other Wisconsin mills have closed, and CEO Butch Johnson pledges the mill will continue providing local jobs and operating in a sustainable way for a century to come.

“We’ve had our challenges,” said Johnson during a Wednesday webinar about the report, noting that investing in energy conservation is “easier said than done, especially for a small company like ours that’s struggling in a pretty tough industry that’s very capital intensive.”

He added that the overhaul has yielded a 33 percent reduction in energy demand per ton of paper produced, meaning “energy efficiency has played a vital role in keeping our doors open.”

And he said investments in new, less energy-intensive equipment — at a mill originally built in 1896 — have yielded other benefits like improved safety, reduced sulfur dioxide emissions, and better quality product.

In 2011, manufacturing accounted for more than a quarter of US greenhouse gas emissions, and the paper and pulp industry made up 11 percent of manufacturing energy use, the report says. Citing Department of Energy statistics, the report notes that the pulp and paper industry uses more energy than primary metals, the food industry or non-metallic mineral production. Among major industries, it is listed third behind petroleum/coal and chemicals.

That means both that paper and pulp mills are responsible for significant greenhouse gas emissions, and that they suffer disproportionately from high energy prices. The report says that great emissions reductions and financial benefits could be achieved if the lagging operations simply updated their technology to match industry norms.

As of 2010, the average U.S. paper facility had been built in 1937, and the average Midwestern one in 1922. The Southeast has newer mills in part because of a chemical pulping process developed there in the 1930s specifically appropriate for the region’s pines, Aden explained.

Meanwhile, American mills as a whole are less efficient than their global counterparts – American mills emitted more carbon dioxide emissions per ton of product on average than those in other developed countries.

There are three basic types of paper and pulp mills: ones that turn wood into pulp, ones that buy the pulp and turn it into paper products, and integrated mills that do both.

Wrapping and packaging paper makes up the majority of industry output, with writing and printing paper also contributing a large amount and newsprint and household paper making up small segments.

While the Southeast is the leading region for wrapping and packaging paper and market pulp, the Midwest has produced the most writing and printing paper. Wisconsin is the leading Midwestern state for production, accounting for a third of the region’s total production. Michigan, Ohio and Minnesota are also big producers.

Most paper and pulp operations are powered both by the grid and by on-site power plants, which burn coal, oil, gas or biomass. Many are powered by “black liquor,” a waste product from pulping.

“Integrated mills have more opportunities to generate their own energy onsite, since they can use parts of tree that can’t be turned into paper to make energy,” noted Aden.

Switching on-site boilers from coal or oil to natural gas or biomass can reduce emissions greatly and save money, the report says. Such switching may also be necessary to comply with environmental regulations, such as the EPA’s Boiler Maximum Achievable Control Technology (MACT) rule, which would require many mills to update their boilers.

The WRI report urges wider use of combined heat and power and distributed generation, and says better policies on interconnection, renewable power and zoning can help facilitate this. Specifically, reforms to the federal 1978 Public Utility Regulatory Power Act (PURPA) could make it more attractive to adopt distributed generation.

State laws and utility policies can also make a big difference. For example, making it more profitable or viable for manufacturers to sell energy back to the grid; and changing electricity pricing structures so it is in both the utility’s and the manufacturer’s interest for them to reduce power use.

The report also urges the adoption of policies including minimum performance standards for motors, boilers and pumps. And it recommends more research to develop geographically-specific policies that are tailored to the needs and realities of the pulp and paper industry in the Midwest or other regions.

The report frames the suggestions for the Midwestern paper and pulp industry as symbolic of how other sectors could increase their competitiveness while reducing their greenhouse gas emissions. The July 17 webinar was part of the Chicago-based Midwest Energy Efficiency Alliance’s Industrial Initiative series (MEEA is a member of RE-AMP, which publishes Midwest Energy News).