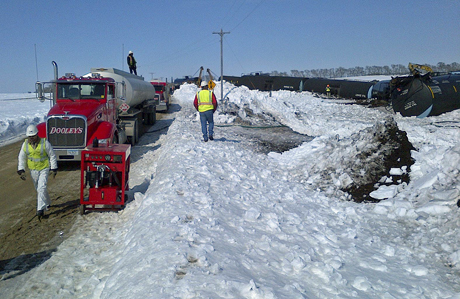 In the dead of night on July 6, a 173-car freight train carrying crude oil from North Dakota’s Bakken Shale broke free from its parking spot and rumbled toward the tourist town of Lac-Mégantic in Quebec.

The ensuing tragedy — as many as 50 dead and a town in ruins — has echoed across the North American rail industry, which has been quietly hauling bigger and bigger volumes of crude in recent years.

Analysts say leading freight railways, including Warren Buffett’s Burlington Northern Santa Fe Co., Canadian National Railway Co. and CSX Corp., should brace themselves for new regulation — but that it may take time for pressure to build up.

Kolstad said cities and environmental groups would likely lead the push for new regulations, although their power over private, interstate freight companies is limited.

“Municipalities might say they don’t want trains parked in their communities, but they can’t stop the transit,” Kolstad said.

That hasn’t stopped some from trying. Last month, six protesters were arrested in Fairfield, Maine, while attempting to block a Pan Am Railways Inc. train allegedly carrying 70,000 barrels of crude oil from North Dakota’s Bakken Shale play. Pan Am is one of Maine’s leading crude-by-rail carriers.

350 Maine, the environmental activist organization behind the peaceful protest in Fairfield, issued a post on its website galvanizing opposition to shipping crude by rail following the Lac-Mégantic disaster.

Fairfield Town Manager Joshua Reny said that even if public opinion in the small transit city turned against railways, local officials would have few options short of petitioning the Federal Railroad Administration to intervene.

Ultimately, he said, small municipalities are “at the mercy” of federal overseers under hazardous material transportation laws.

The Quebec disaster occurred a little more than 100 miles northwest of Fairfield, where the amount of crude shipped by rail has “exploded” in the past few years, Reny said.

“I think there are some really important policy questions and discussions that need to be had,” Reny said. “But ultimately, those discussions are going to have to be made at the federal and state level.”

The two U.S. lawmakers best positioned to raise the issue of crude-by-rail regulations — House Transportation and Infrastructure Chairman Bill Shuster (R-Pa.) and Senate Commerce, Science and Transportation Chairman Jay Rockefeller (D-W.Va.) — have not scheduled any hearings in response to the derailment (EnergyWire, July 12).

Rob Kulat, a spokesman for FRA, declined to comment on the implications of the Quebec spill on U.S. regulations.

He noted that railways must consult with local communities before shipping poisonous-by-inhalation chemicals. For less volatile — but still hazardous — materials such as crude oil, municipalities can request a list of the top 25 dangerous substances that pass through their jurisdictions.

The rail companies themselves are also responsible for self-regulating issues like track repair and tank car integrity.

Holly Arthur, spokeswoman for the Association of American Railroads, which represents the top freight carriers in the United States, said the trade group is watching closely as the Lac-Mégantic investigation continues.

“We are committed to using every opportunity to learn lessons and improve our safety record to make every year the safest year on record,” Arthur said, noting that it is in the industry’s best interest to avoid mishaps.

The AAR reported a record 1.37 million barrels per day of petroleum products shipped via rail in the first half of 2013, with crude representing roughly half that figure. The surge in oil deliveries has brought a corresponding increase in spills, even though overall freight accident rates have declined in recent years (EnergyWire, July 17).

“Whenever something changes this quickly, it’s worth[while], I think, for federal regulators and state regulators stepping back and just making sure the existing rules that we have in place are adequate to deal with the changes on the ground,” said Jason Bordoff, director of Columbia University’s Center on Global Energy Policy and a former White House energy adviser, in an appearance on Platts Energy Week on Sunday.

Bordoff said regulators should try to learn from the “multiple failures” evident in the Quebec incident. While the investigation is ongoing, part of the problem may have stemmed from the popular DOT-111 tank cars involved in the crash, which have been repeatedly cited by Canadian and U.S. regulators as prone to puncture (EnergyWire, July 10). Newer versions of the tank car are held to higher standards, but the older, “grandfathered in” varieties may soon be forced off the tracks by new regulations, experts say (EnergyWire, July 11).

Trains’ brake systems may also face additional scrutiny, as MM&A blamed its engineer for possibly failing to engage enough handbrakes to prevent the tanker cars from rolling into Lac-Mégantic. On Wednesday, Maine’s Department of Transportation requested railways in the state to submit their best practices regarding parked trains, following an executive order to review freight safety from Gov. Paul LePage (R).

Regardless of specific outcomes, a July 11 report from Moody’s rating service predicted the Quebec derailment “will inevitably lead to increased U.S. and Canadian government scrutiny and permitting delays, along with higher costs for shippers.”

In Delaware, environmentalists this week led an unsuccessful effort to stymie a PBF Energy Inc. rail terminal with a projected 180,000-barrel-per-day unloading capacity.

Rail transportation has offered a lifeline to refineries along the East Coast — including PBF’s 190,000-barrel-per-day Delaware City facility — by granting access to cheaper domestic oil.

Earlier this week, representatives from the Sierra Club and the Delaware Audubon Society claimed that PBF’s plan to transfer and barge 45,000 barrels per day of heavy Canadian crude to its Paulsboro, N.J., refinery violated Delaware’s Coastal Zone Act, which has shielded the edge of the Delaware River from heavy industrial expansion since 1971.

The state’s industrial board rejected the environmentalists’ arguments Tuesday, allowing PBF to continue its rail expansion.

“The Coastal Zone Act is an important element of Delaware’s environmental protection laws, but in 40 years it has never prohibited the construction of rail facilities,” said Catherine Rossi, spokeswoman for Gov. Jack Markell (D), in a statement Tuesday following the ruling.

Kolstad of Rail Theory Forecast said such environmental push-back is bound to increase after the Quebec derailment and acknowledged that not all cases would favor industry. But he said he expects “rational thinking will prevail” and that crude will keep flowing on the tracks.

“I don’t think there’s any alternative right now,” he said.

But Jeff Tittel, director of the New Jersey Sierra Club, questioned the necessity of moving oil by train. He took particular issue with PBF’s plans to transfer heavy oil sands bitumen, which is more difficult to clean up in the event of a spill.

Tittel also raised the specter of a Lac-Mégantic-type incident occurring in the United States.

“We are playing railroad Russian roulette with all the tanker cars and barges carrying toxic materials through populated areas,” he said.