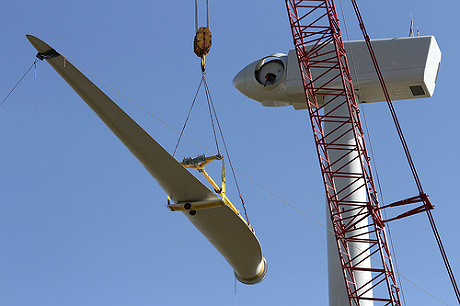 More than six months after Congress extended a vital tax break for U.S. wind energy developers, the industry is showing signs of strengthening as electric utilities and high-profile companies such as Wal-Mart, Google, Microsoft and Apple chart their growth strategies around the use of wind and other renewable energy resources.

But in measures of direct U.S. jobs and manufacturing activity, the story has been more mixed, suggesting the fallout from last year’s slowdown in wind energy development left a deep scar on the nascent industry, even as the 2.3-cent-per-kilowatt-hour production tax credit gained new life.

The mixed signals are reflected in recent headlines.

Vestas Wind Systems, the world’s largest wind energy manufacturer, announced recently that it would add jobs at its Pueblo, Colorado, tower manufacturing plant after cutting nearly 700 jobs from its U.S. payroll in late 2012. The Danish company operates a U.S. headquarters in Portland, Oregon, and builds nacelles, blades and towers at four manufacturing plants in Colorado.

Andrew Longeteig, a U.S.-based Vestas spokesman, said the company has seen “a much higher activity level and interest from customers for our wind turbines compared with 2012,” especially for the company’s newest turbine model, the V110-2.0 MW.

That activity includes a recent order for 166 turbines to be installed at a wind farm in Alberta. “These orders are keeping our U.S. factories busy, and we are ramping up at our tower factory in Pueblo, Colorado, with the hiring of at least 200 people overall this year to meet customer demand.”

And in Kansas, Siemens recalled roughly 300 permanent employees who had been laid off last fall from its Hutchinson turbine manufacturing plant. A spokesman for the German multinational firm with extensive U.S. operations told the Hutchinson News he was hopeful that employment would continue to grow in the months ahead.

“It’s just a matter of how much up and when,” the spokesman told the newspaper. “We always react to the market activity. We’re optimistic.”

Yet other major firms with U.S. supply chains remain stuck in neutral or worse.

Nordex USA, the U.S. subsidiary of German manufacturer Nordex SE, announced late last month that it would cease operations at a new $40 million nacelle manufacturing plant in Jonesboro, Arkansas, after the company failed to generate enough business to keep the facility open. Roughly 40 jobs will be cut at the factory later this year, after current orders are filled, and Nordex will shift production to Rostock, Germany.

The company’s chief executive officer, Jürgen Zeschky, said Nordex was “reacting to the weakened demand from the U.S. market, brought on by the unpredictable extensions of the production tax credit (PTC), and the resulting low utilization rate of our U.S. assembly plant.”

Liz Salerno, director of data and analysis for the American Wind Energy Association, said the industry’s growth trajectory is being affected in part by the way Congress went about extending the PTC.

While most wind energy developers need an 18-month planning horizon to complete a new wind farm, Congress granted only 12 additional months of tax credits in its Jan. 1 PTC extension, which passed as part of the much larger “fiscal cliff” legislation.

Some developers will be helped by new Treasury Department guidance allowing projects to claim tax credits even after December 2013 as long as projects are at least 5 percent underway. But Salerno said many firms are still in the process of re-engaging with customers and lenders after last year’s virtual lockdown on all projects not scheduled to come online before the end of 2012.

“Almost everyone has reactivated their pipeline of projects that had been halted last year,” Salerno said. “But several stages have to happen first in that development process before orders start getting placed and manufacturing can get going.”

Job growth will be delayed

Among the U.S.-based wind energy firms that have emerged from last year’s PTC uncertainty with an aggressive development portfolio is General Electric. The firm announced in May that it had received new orders for 1 gigawatt of new wind turbine capacity, enough to power 330,000 average U.S. homes.

As with Vestas, GE attributed its 2013 success partly to the introduction of new, more advanced turbine technology. Lindsay Theile, a GE spokeswoman, said the company uses an extensive supplier base for its U.S. operations and deferred to AWEA for information on how such firms were affected by the PTC extension.

While details on the wind energy sector’s overall job growth and other measures of economic activity won’t be available until later this summer, Salerno said she was confident that the steep cuts in jobs that occurred in the second half of 2012 have tapered off.

In 2012, the wind energy sector employed an estimated 80,700 people, according to AWEA, up from 75,000 from the year before. Given the deep cuts made across the industry in 2012, it remains unclear how much the overall job figure will change for 2013.

While manufacturers like Vestas, Siemens and GE are likely to continue modestly expanding their operations as new orders come in, Solerno predicted that hiring in the construction and field services side of the industry will remain anemic due to the delay or cancellation of projects that would have come online in 2013.

“I think it’s safe to say we’re not going to build 13,000 megawatts [of new generation capacity] this year,” she said.