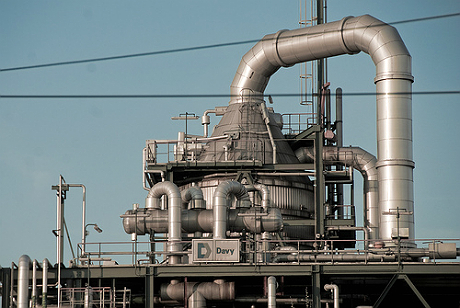 A combined heat and power facility in Germany. (Photo by Thomas Brauner via Creative Commons)

Combined heat and power, an energy-saving technique for generating the two from a single fuel source, could be much more widely used in the U.S. And according to a recently-published paper, although they haven’t played much of a role to date, utilities are in the best position to promote it, and the energy savings that it promises.

There is a catch, however. As with other strategies that tend to reduce the demand for electricity and natural gas, utilities have been lukewarm about combined heat and power, or CHP. The study suggests that state utility regulators and perhaps state legislators will need to make it more attractive – that is to say, profitable – for the utilities that have the tools to develop it.

According to the report, the current 82 gigawatts of CHP capacity provides roughly 12 percent of the nation’s annual electricity production. It’s been estimated that another 130 gigawatts of capacity could be developed from existing facilities.

President Barack Obama has gotten behind combined heat and power. One year ago, he issued an executive order calling for 40 gigawatts of new CHP capacity in the country’s industrial sector by 2020.

“If we’re going to meet that, or get anywhere near it, we’re going to have to do something different,” said Anna Chittum, one of the authors of a recently-published trio of reports about CHP. She is a senior policy analyst for the American Council for an Energy-Efficient Economy, which published the reports.

The ACEEE is a member of RE-AMP, which publishes Midwest Energy News.

Factories, universities, hospitals and farms throughout the upper Midwest – and the nation – have installed combined heat and power systems.

In the country’s midsection, Chittum said, “a lot of the applications have been agricultural. A dairy might capture biogas. That’s one application that seems to be growing a bit in the more agricultural states.” Ethanol producers are another natural candidate for CHP, she said.

However, momentum is lacking, according to Chittum. She believes that utilities, given the right incentives, could give a big push to combined heat and power.

CHP tends to make economic and energy sense for large users of both electricity and some sort of thermal energy, in the form of either space heat, hot water or steam. CHP can use any type of fuel including natural gas, coal or some sort of biomass like manure or other organic waste.

Installing a CHP system requires a large investment upfront, a powerful disincentive to most potential users of the technology. Chittum pointed out that utilities, which routinely invest in costly power plants and distribution systems, are accustomed to dealing with such debt – and are allowed by regulators to charge ratepayers for such investments.

In Minnesota and Wisconsin, Alliant Energy helps customers by providing financing to cover the cost of constructing a CHP plant.

In addition to having needed resources, Chittum pointed out that utilities are uniquely positioned to benefit from the growth of CHP. Because the energy is used where it is generated, combined heat and power provides electricity while making no or minimal demands on the distribution system. Utilities know where the grid is overloaded, Chittum observed, and so can target development of CHP in places where it would improve the overall distribution of power.

Some states have made it even more attractive. The Ohio legislature passed a bill in 2012 that permits utilities to apply energy produced by CHP facilities towards the state’s renewable energy standard. The law also allows Ohio utilities to put the cost of CHP in their rate base, meaning they can recoup the costs from ratepayers.

That sort of policy could be a game-changer where combined heating and power is concerned, according to Chittum.

“For a utility,” she said, “this could mean something.”