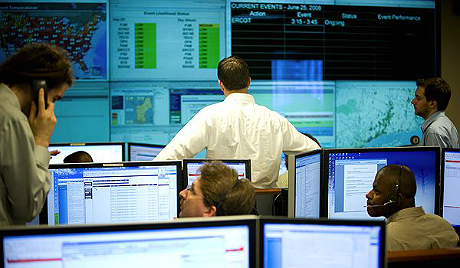 A burgeoning demand-response industry flexed its muscles during a heat wave on the East Coast last week by powering down machines at key times to de-stress the aging electric grid.

EnerNOC’s members shaved 1,000 megawatts as temperatures hovering above 100 degrees Fahrenheit roasted the Empire State, including New York City, on Friday, setting records for power consumption. EnerNOC and its members, in turn, were paid for the service.

Grid operators and EnerNOC say they’ve barely scratched the surface. “When there’s a heat wave, there’s a lot of media attention, but our systems are built precisely to handle this,” said Sarah Elliott, EnerNOC’s senior vice president. “There was no unusual scrambling or chaos associated with it. This is what we do day in and day out.”

EnerNOC was one of many companies called on to provide 1,600 or so megawatts of demand response for PJM Interconnection, which oversees transmission for 60 million people in the District of Columbia and 13 states, including parts of Ohio, Michigan, Indiana and Illinois. PJM said it actually had a total of 9,300 megawatts at its disposal and more demand response was called in to buffer the grid during a heat wave last July.

With demand response expected to grow under new Federal Energy Regulatory Commission rules, how participating companies curb their power use is at the center of a heated debate in the electric sector, with utilities issuing warnings about the nation relying too heavily on “negawatts.”

One issue is the ability of companies to decrease demand by switching on diesel-fueled emergency generators.

Last week, press reports alerted PJM that companies in the grid operator’s footprint had switched over to backup generators, something that is allowed under a new U.S. EPA rule that allows demand-response operators to use generators for up to 100 hours per year without new pollution controls. That’s significantly higher than the current 15-hour cap.

The rule also allows the generators to operate for up to 50 hours per year during high demand, or “peak shaving,” and other nonemergency situations through August 2017. Demand-response operators, on the other hand, have argued that they need more flexibility in the standards (Greenwire, May 29, 2012).

The Electric Power Supply Association (EPSA), including companies like Exelon Corp., NRG Energy Inc. and BP Energy Co., and green groups like the Conservation Law Foundation asked a federal appeals court earlier this year to weigh in on the legality of that rule.

EnerNOC said its members can use generators in states like New Jersey in emergency demand-response programs.

John Shelk, EPSA’s president and CEO, said industry is also concerned about the “fatigue” factor and questioned just how many times big industrial and commercial entities will answer the call to pull back power.

“When it’s hot and [demand response is] called on, it better be there,” Shelk said. “If you’re going to have more of it and rely on it, we need to make sure it can be dispatched and we can rely on it.”

And then there’s the question of whether new market entrants can game the system.

Earlier this year, the operator of a paper mill in Maine agreed to pay more than $13 million to settle allegations that it manipulated a demand-response program in New England and stole millions of dollars from ratepayers (E&ENews PM, March 27).

Last year, a similar case surfaced after witnesses in Baltimore told grid operator PJM Interconnection that the lights were turned on in the Baltimore Orioles’ ballpark even though the team wasn’t scheduled to play that day. FERC soon began investigating Pennsylvania-based demand-response company, Enerwise Global Technologies Inc., and the company later agreed to pay a civil penalty of $780,000 for violating the commission’s anti-manipulation rule after ramping up power usage to inflate potential payments.

Proponents of demand response say requests will be filled, and regulatory answers to combat “fatigue” exist.

EnerNOC’s Elliott said her company gives incentives to companies to provide demand response for longer periods of time, and a portfolio of participants can be assembled to ensure electricity demand is curbed.

“Fatigue can, of course, be an issue of program rules and expectations aren’t clear,” she said. “But we do a pretty good job of that.”

PJM is also reviewing compensation for demand-response participants to determine whether companies that curb power longer should earn more.

“We’re trying to make sure it’s fair, that the expectation of demand response are equally weighed with what we’re expecting from our generators,” PJM spokeswoman Paula DuPont-Kidd said.