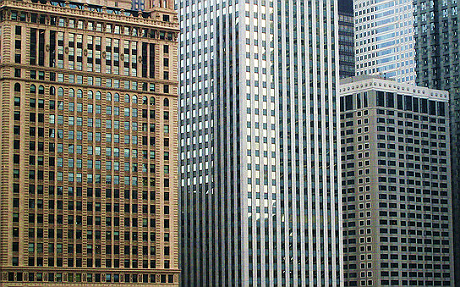 There’s an adage attributed to self-help author Robin Sharma that “what gets measured gets improved.”

That’s the concept behind an energy efficiency bench-marking ordinance being considered in Chicago, similar to ones adopted in at least seven other major cities. The ordinance would require about 3,500 large residential, commercial, and municipal buildings to measure and report their energy use annually, with the information made public by the second year.

There would be no requirements that buildings improve energy efficiency, but studies have shown that taking measurements would likely result in substantial investments and energy efficiency improvements.

“Once they have the information in their hands about how much money they could be saving, there’s a lot of data suggesting the benchmarking part of the ordinance alone results in investment in making buildings more efficient,” said Rebecca Stanfield, senior energy advocate for the Natural Resources Defense Council.

The ordinance passed a city council committee by an 11-2 vote on Tuesday and was scheduled for a vote by the full council Wednesday. But two aldermen with concerns about the ordinance invoked a state law allowing the vote to be delayed until the next monthly meeting.

Their move seemed driven by constituents who oppose the ordinance, saying it would be unfair to owners of older buildings and would involve burdensome costs and efforts. The aldermen, Brendan Reilly and James Cappleman, represent downtown and north side wards, respectively, with many large condominium and apartment buildings.

The Building Owners and Managers Association of Chicago (BOMA/Chicago) opposes the ordinance, which was unveiled by Mayor Rahm Emanuel on June 26. The association issued a statement saying:

“While we support Mayor Emanuel’s benchmarking ordinance, we believe the public disclosure mandate in the proposed ordinance will unfairly penalize and marginalize many older and historically significant buildings in Chicago…We represent many buildings that are doing what they can to improve their sustainability and energy efficiency, but still struggle with infrastructure limitations and the cost of retrofit work. Publishing the scores for buildings that simply cannot afford the work necessary to raise them will not ‘shame’ those buildings into achieving higher scores. It will simply impose yet another competitive burden on an already challenged sector.”

Proponents of the ordinance think opposition is based largely on misunderstanding.

“It’s frustrating that it’s going to be another month, but it gives us more time to educate condo and business owners about how benchmarking will be beneficial for them,” said Steven Kismohr, senior technical manager of the Midwest Energy Efficiency Alliance.

The ordinance calls for efficiency to be measured using Energy Star, a free online tool developed by the U.S. Environmental Protection Agency.

“There’s been a lot of concern from condo associations – they had wildly inflated estimates of what compliance would cost,” said Stanfield, noting that Boston, Minneapolis, Seattle, San Francisco, Philadelphia, Washington D.C. and New York already have such ordinances. “In fact the benchmarking tool is free…and the staff time to fill out the information online is totally dwarfed by the savings once they do benchmarking” – assuming they make investments to reduce their energy use.

The ordinance includes a requirement that the measurements be confirmed by a certified architect, engineer or other professional, a step which could cost several hundred to several thousand dollars every three years, Kismohr estimated. But the city plans to offer trainings so that existing building managers or engineers can be certified to do the confirmation themselves.

Kismohr said the confirmation requirement is important because of lessons learned in cities that previously adopted such ordinances, where “business owners would sort of make up data.”

The ordinance includes exceptions for buildings in “financial distress” or with less than 50 percent occupancy, and it also exempts buildings used primarily as data centers, TV studios or trading floors and the like from public disclosure for the time being.

In her NRDC Switchboard blog, Stanfield addressed opponents’ concerns about the ordinance, including that older buildings would get poor marks:

“More than one-third of the 20,000 nationwide buildings receiving Energy Star certifications (recognition for top performers) were built in or prior to 1980. Buildings of all ages can become top energy performers. In New York, the city’s first report on the implementation of their benchmarking and disclosure ordinance found that skyscrapers built prior to the crash of 1929 used 40 percent less energy per square foot than the newer office buildings.”

Stanfield also noted that buildings which do get low scores often have the greatest potential – essentially low-hanging fruit – for making relatively inexpensive investments with big efficiency payoffs that will save them money in the long run. “For instance, lighting is close to 35 percent of the electricity used in commercial buildings in the U.S. Typically, lighting improvements have very short payback periods,” she wrote.

The NRDC and MEEA are members of RE-AMP, which also publishes Midwest Energy News.

The ordinance covers buildings greater than 50,000 square feet, which make up less than one percent of city buildings but account for 22 percent of energy use, according to a fact sheet from proponents. Among the 35,000 buildings nationwide using ENERGY STAR between 2008 and 2011, the sheet says, energy use declined seven percent.

A fact sheet about the Chicago ordinance estimates that if all covered buildings reduced their energy use by five percent, “it would involve a $250 million up-front investment that would save these buildings $40 million dollars each year, create hundreds of jobs, and remove the equivalent of 50,000 cars from the streets.”

The proposed ordinance leaves unclear exactly how energy use information would be made public; in other cities with such ordinances it is often searchable through property identification numbers.

Stanfield said there is much demand among potential buyers and renters to have access to energy efficiency data.

“We know there are a lot of people interested in making leasing decisions with energy efficiency in mind,” she said. “Law firms are looking for efficient space, all kinds of commercial operations are trying to factor that in to their decisions.

“It is no different than applying miles per gallon stickers to cars – when you go to buy one people are looking for that information and the market can’t work unless you provide it.”