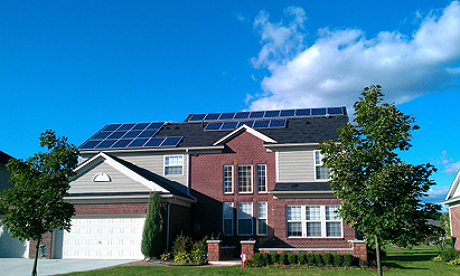 Srinergy says it can now install solar power systems like this recent 7.9-kilowatt project it built in Canton, Michigan for about $3 per watt. (Photo via Srinergy)

Cross-posted with permission from Michigan Land Use Institute

Michigan is now a center for manufacturing solar panels, but making a buck on installing them here remains tough.

Many Michiganders still don’t understand that their state has enough sunshine to make solar power worth the investment. Michigan utilities sharply limit how much power they buy back from privately owned solar power systems, reducing their profitability. And, unlike solar-savvy states, Michigan offers no solar tax incentives, and many local officials are completely unfamiliar with permitting standards for the technology.

But none of that bothers Srinergy’ s Prasad Gullapalli. He’s got his eyes on the prize.

His three-year-old, Novi-based solar installation company has joined the U.S. Department of Energy’s nationwide Race to the Rooftops contest. The firm and the partners it is recruiting will compete for part of a $10 million prize. It will be shared among the first three teams that install 6,000 smaller-scale solar systems on homes or businesses while keeping their “soft costs”—everything but the panels and other hardware—at or below $1 per watt.

Minh says the race will help figure that out by prompting contestants to work “with local agencies, utilities, communities, and installers to streamline the permitting, installation, and interconnection process for solar.”

Another DOE official indicated that the department’s eventual goal for its overarching Sunshot Initiative—the rooftops race is just one part of it—is to get soft installation costs down to 60 cents a watt for small systems as park of making “solar power cost-competitive with other forms of electricity by the end of the decade.”

After the contest is over, in late 2015, Le added, DOE aims to discover, adopt, and promulgate the “best practices that reduce the soft costs of solar energy systems by more than 65 percent.”

Since, according to the DOE, soft costs often account for half the price of small-scale solar installations, cutting them by that much could drop a project’s cost by one-third. That would put a modest home system in the $3 per watt range, or $15,000 for a 5-kilowatt system—enough electricity to simultaneously power most appliances in a typical home.

Surprisingly, Gullapalli said his young company is already at that price point in solar-wary Michigan.

“If you want to do solar,” he said, “most local installers will say it costs $4 or $4.50 per watt. We are saying it is $3, so I’m not worried about the competition. We are very confident that, because of the way we manage the business we can do that. All we need are the roofs to install on.”

But he knows getting to 6,000 solar systems in Michigan is an uphill battle.

“Very few people in Michigan know about solar power, and there are no tax incentives at the state level,” he said. “So we are creating outreach without state leadership. I know there are states definitely ahead of us, like New Jersey, Colorado, and California. But it doesn’t mean we should give up the race. That is what the challenge is all about: setting an example.”

Gullapalli said he’s not concerned that, so far, he’s formally signed up only one partner—WARM, a Detroit-based non-profit providing clean-energy services, technical assistance and policy guidance. There’s still 18 months to go before the contest’s first tally and reckoning, and he’s confident that his price for panel installation will help expand his team, win many new customers and, perhaps, millions of dollars for him and his partners.

Jacob Corvidae, who oversees WARM’s green consulting work, said the price Gullapalli is quoting is realistic, given falling panel prices, Srinergy’s approach, and local permitting officials who “get” solar and are helping it grow.

“We now try to find places where officials understand how their building codes apply to solar projects,” he said. “But that can take time to figure out.

“So we don’t enter into a specific city until we are sure we have 10 customers ready to move on installing panels,” he continued. “That means going to the permitting office just once. Then we can get a crew out there to do all of them in one week. That seems like a small step, but it really adds up.”

“In these places,” he said, “the cost of the city services involved [permitting and inspection] is negligible.”

But many local governments in Michigan still have no process for approving solar projects—limiting the potential market for SRInergy and its partners.

WARM’s Corvidae said help is on the way.

“The State of Michigan is developing model policies and codes through the Michigan Energy Office, and should be done by the end of the summer,” he observed. “And the [non-profit] Clean Energy Coalition and Great Lakes Renewable Energy Association are also working on developing other policies to help solar grow.”

A recent news report noted that Saginaw, Midland and nearby William and Thomas townships recently became “solar-ready communities” by streamlining their permitting processes.

WARM, meanwhile, is helping Srinergy via the connections it’s built working with homes and businesses throughout the region on efficiency and clean energy projects.

“Our primary role is to get the word out to people who care about these things that we now have an option for affordable solar,” Corvidae said. “We also function as an honest broker. We are a trusted non-profit; we are here to let you know this is legitimate; it’s not just a marketing scheme by some contractor; we have the expertise to provide quality control.”

Corvidae said another barrier to taking solar mainstream in Michigan—and reaching 6,000 rooftops—is financing. Some people can pay cash for a $10,000 or $20,000 system, and wait the typical 12 to 15 years for full return on their investment. But most homeowners and businesses need a loan.

“We are getting close to the point where you’ll be paying off the panels for less than you once paid on your monthly electric bills,” he said. “I think we are pretty much ready to blow the roof off.”

Getting on the map

Gullapalli believes that his company’s business model will help him recruit more team members and win the race: Srinergy often subcontracts the physical installation to other, local contractors.

“We want to grow the business in a very local way,” he said. “Even if we have a project in Ann Arbor (about 20 miles away), we try to use people there, instead of our people being a half-hour on the road each way. Time is money, and that is why we are very aggressive on our own efficiency.

“But when it comes to all of the contractual obligations, designing the systems, site assessments, all of that, those are a turnkey package that we manage from our office.”

He will also outsource marketing, sales, and public relations efforts as he continues his conversations with a variety of private and non-profit organizations.

Whether SRInergy’s approach is enough to grab the big prize is a tough question.

But Corvidae and Gullapalli are undeterred. Winning would be great, they said, but it’s not everything.

“Even if we don’t win,” Corvidae said, “we can put Michigan on the map on this, and put solar on the map in Michigan. It helps the entire solar industry; the more people see the panels, the more it becomes normal and the more people want to do it.”

“Hey, you gotta be a little crazy to do this,” Gullapalli said. “But without that, we would not have made it to the moon. I’m the crazy guy now, but you never know.”

Jim Dulzo is the Michigan Land Use Institute’s senior energy policy specialist. Reach him at jimdulzo@mlui.org.

The MLUI is a member of RE-AMP, which publishes Midwest Energy News.