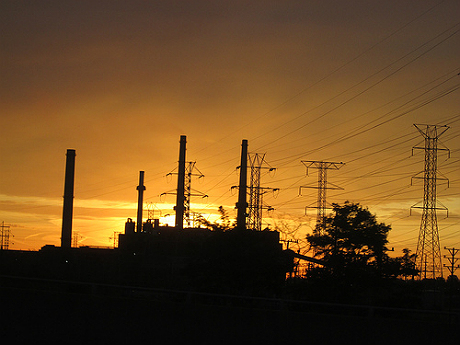 It’s been a year since Midwest Generation’s two coal plants in Chicago closed, amid much celebration from environmental groups and residents.

Now another archaic Midwest Generation coal plant located in a low-income, largely minority urban community is in the spotlight.

Environmental advocates think that the coal plant in Waukegan, 40 miles north of Chicago on the shore of Lake Michigan, will close in the next few years. But they aren’t willing to wait; they say state agencies must take action now to stop the plant from killing fish and polluting the lake, groundwater and air.

They want the Illinois Environmental Protection Agency (IEPA) to make more stringent demands in a Clean Water Act permit that is currently open for public comment; and they want the company to have frank discussions about the plant’s future with community residents and elected officials.

During a public hearing on the draft water permit in Waukegan July 31, environmentalists and local residents voiced concerns about contamination from coal ash stored on the site; and impacts on fish from the plant’s open cooling system, which sucks in Lake Michigan water then returns it at significantly higher temperatures.

Federal regulations to address coal ash storage and cooling systems are still being developed, so environmental lawyers argued that it is up to the state agency to deal with these issues in the meantime. Jessica Dexter, a staff attorney with the Environmental Law and Policy Center (ELPC), criticized the agency for delaying monitoring requirements and mandates on coal ash and cooling system impacts until the next permit is issued.

Dexter said during a webinar hosted by the ELPC July 30 that the IEPA has “backpedaled” from stronger protections on Lake Michigan water quality in a draft permit the state agency had proposed in 2011 and never ratified.

“In the most recent draft, IEPA has resurrected a variance that the facility obtained in 1978,” Dexter said. “Legally speaking, those variances don’t last forever. We argue the facility should at least have to submit data to prove that the variance is still appropriate before the permit is renewed.

“Instead of reviewing data now, IEPA has put a condition in the permit that asks Midwest Generation to submit data later so that when the permit is up for renewal in five years, IEPA can make the decision that it should be making in this permit.”

She said the pending permit should institute stricter limits on the temperature of the about 650 million gallons of water released back into the lake each day.

“Unnaturally hot water can harm aquatic life,” said Sierra Club Illinois clean water advocate Cindy Skrukrud during the webinar. “It can disrupt fish spawning cycles so that they spawn at the wrong time when their food supply isn’t available.”

Meanwhile countless fish are killed in open cooling systems such as Waukegan’s when they are sucked into or up against the water intake structure. Environmental advocates have been pushing the government to demand closed cooling systems, where water is not sucked in from the lake.

The ELPC and Sierra Club are members of RE-AMP, which publishes Midwest Energy News.

In 2012 the IEPA issued the Waukegan plant a violation notice related to arsenic, boron and other compounds leaching into groundwater from its coal ash storage; and environmental groups have filed suit over groundwater contamination from the plant. Midwest Generation president Douglas McFarlan said the company has entered a compliance agreement with the IEPA and that currently all the ash storage ponds are lined and not leaking.

The Waukegan plant is highlighted in a report released this month by the Sierra Club and other environmental groups identifying coal plants as the biggest cause of toxic water pollution nationwide.

The report says that the state discharge permit Waukegan has been operating under for more than a decade “sets only copper and iron limits for the 3.2 million gallons per day of ash-contaminated waste which Waukegan is authorized to discharge, failing to set any limits for poisons like arsenic, mercu­ry, and selenium.” The new draft permit currently under review “repeats this mistake,” in the report’s words, still lacking limits on the toxic heavy metals.

McFarlan said there are no limits on those metals since the plant is not releasing them into the water. A Midwest Generation fact sheet says that  all wastewater is treated before being released into the lake, and that: “The vast majority of water discharged by Waukegan Station is cooling water which does not come into contact with anything within the station except the outside of steel tubes for cooling purposes only.”

Environmentalists, however, suspect that contamination from the coal ash ponds could be making its way into groundwater and then into the lake.

“We know that the groundwater on the site flows from the ponds towards Lake Michigan,” said Skrukrud during the webinar. “We believe that IEPA should incorporate groundwater monitoring requirements into this permit as it did for the city of Springfield’s power plant” in central Illinois.

Meanwhile, critics say that in the bigger picture, Midwest Generation should be candid with the community and elected officials about the fate of the plant, which many see as likely to close in the near future.

The plant was originally built in the 1920s, and its current two boilers date to 1958 and 1962. Under state rules on sulfur dioxide and other pollutants, the company must complete installation of pollution control equipment — estimated to cost $160 million — by May 2015.

In its third quarter 2012 filing with the Securities and Exchange Commission, Midwest Generation said that it could only retrofit its plants with pollution controls by borrowing money or receiving more funding from its parent company, Edison Mission Energy, and that it was “less likely” retrofits would be done on the Waukegan station.

In December 2012, Midwest Generation declared Chapter 11 bankruptcy, and in a January hearing before the Illinois Pollution Control Board company officials said they lacked the money to make retrofits by state deadlines.

An April 2013 email dispatch by the financial institution UBS Securities LLC said “we believe” the pending state sulfur dioxide limit “will eventually have the effect of likely retiring” the Waukegan plant and individual units at the Joliet and Will County plants southwest of Chicago.

But Midwest Generation has not publicly announced any plans to close Waukegan, and McFarlan said in an email that the company is continuing to invest in the plant.

“Like every business owner — coal plants or the corner pharmacy or Midwest Energy News — we constantly evaluate market conditions and make short-term and long-term business decisions as necessary.  Since we acquired Waukegan Station in 1999, we have spent over $50 million on new pollution controls, including the installation of some of the first mercury emission controls on any power plant in the country in 2008.  We are in early stage work on additional improvements that would require about $120 million in investment over the next two years. We will make final investment decisions when and as necessary to comply with state and federal regulations.”

In Chicago, community groups, city officials and Midwest Generation executives have been participating in a task force to discuss possible future uses of the two coal plant sites. Sierra Club Beyond Coal campaign field organizer Christine Nannicelli said they would like to see a similar process start in Waukegan even before the plant closes.

The plant’s closure could have even greater significance in a town like Waukegan, since there are fewer other employment options for affected workers; and the 194-acre lakefront plant site could end up either a benefit or a bane to the economically struggling community. Waukegan is already home to several Superfund sites, including the notorious now-closed Outboard Marine plant which caused serious PCB contamination.

“There’s a long history of industry on that lakefront leaving town and leaving a lot of pollution,” said Nannicelli.

As in Chicago, advocates say Midwest Generation has a particular responsibility to the community given the environmental justice implications of its operation. The population within three miles of the Waukegan plant is 72 percent minority with an average income of $16,000 annually, according to the NAACP’s report “Coal Blooded: Putting Profits Before People.”

The civil rights group’s 2011 list of the nation’s worst coal plants in terms of environmental justice ranked the Waukegan plant 12th, and Midwest Generation’s Crawford and Fisk plants first and third, respectively. Nannicelli noted that many of the lower-income Latino residents living around the Waukegan plant regularly eat fish they catch in Lake Michigan, which could potentially be contaminated with mercury and other toxins.

Good for air, bad for water?

While the IEPA permit debated this week deals only with water impacts, public health and environmental experts are also concerned about the plant’s air emissions.

A 2010 report by the ELPC found that the Waukegan plant was responsible for up to $690 million in health costs over the past eight years, from soot (particulate matter) and smog which are linked to cardiovascular, respiratory and other problems.

In an April 2013 report the Sierra Club mapped what it describes as a “dangerous” sulfur dioxide plume above allowable EPA levels, emanating from the Waukegan plant and encompassing a high school and the popular Illinois Beach State Park.

Advocates note that ironically if Midwest Generation does decide to invest in a sulfur dioxide control system known as dry sorbent injection (DSI), the ash produced will become more toxic since it will include the compounds removed through the DSI process.

McFarlan said that such “fly ash” is not stored on-site at the plant; and that the plant’s ash ponds primarily hold less toxic “bottom ash” from boilers.

Nevertheless, Nannicelli said advocates worry about a provision in the IEPA permit allowing for intermittent storage of fly ash on site.

“The more you take out of the air, the more water pollution you can see,” said Nannicelli. “It makes it clear to everyone that there’s no safe or healthy way to burn coal. That’s why the company needs to come forward with a clear plan for a reasonable retirement.”