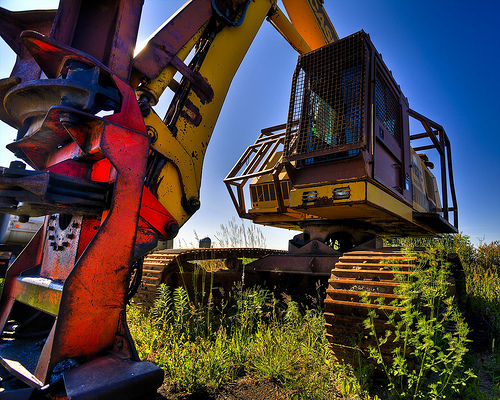 Logging machinery in Michigan. Wood waste was one of the potential fuel sources for a proposed biofuel plant in the Upper Peninsula. (Photo by George Thomas via Creative Commons)

The exit of its majority owner and operator leaves the future uncertain for a long-delayed project that has attracted at least $120 million in public financing to turn wood from Michigan’s Upper Peninsula into fuel for vehicles.

New Hampshire-based biofuels company Mascoma Corporation announced in 2011 that Valero Energy would provide up to $50 million in financing for a $232 million facility in Kinross Charter Township, Michigan, and purchase the 20 million gallons of ethanol it would produce annually.

However, Valero spokesman Bill Day confirmed in an email that the company “is no longer involved in the Mascoma cellulosic ethanol project” but declined to give further details.

Mascoma declined to comment for this story, but in a 2012 filing with the Securities and Exchange Commission the company noted Valero’s important role in the project’s future.

“Our definitive agreements with Valero are critical to the success of our hardwood CBP business and our ability to achieve and maintain profitability,” the document says, referring to Mascoma’s process of using genetically modified yeast and bacteria to turn plant fibers into fuel in a single step.

In 2008 Mascoma formed Frontier Renewable Resources, a partnership with Michigan-based timber and mining company J.M. Longyear, to develop the Kinross plant and commercialize its production process.

Construction of the facility was slated to begin in 2011 and wrap up by the end of this year, but the company has yet to break ground.

According to a 2012 SEC filing in preparation for an initial public stock offering, 93 percent of Mascoma’s revenue in 2011 came from government funding.

Mascoma said government investment would help create 150 construction jobs and 50 to 70 long-term positions in a region where they’re sorely needed, but a 2011 report from the MEDC showed there had been only three new hires.

In March 2013 the company withdrew its application for a public stock offering, citing market conditions. That could make it challenging to raise enough money to proceed, said Claire Curry, a bioenergy analyst with Bloomberg New Energy Finance.

“Now they’re kind of stuck,” she said. “Unless you have about $300 million, you’re not going to build a new plant. If they’ve been waiting for two years to build this plant, they’re going to be leaking money.”

Despite mandate, demand slow to materialize

Congress in 2007 mandated that refineries blend an increasing amount of cellulosic ethanol into their fuel each year as a way of reducing demand for oil while avoiding the food-versus-fuel debates surrounding corn-based ethanol.

However, no cellulosic fuel made it to refineries until last year, and the roughly 20,000 gallons produced fell far short of the government’s 8.65 million-gallon goal for 2012. That goal was itself only a fraction of the 500 million annual gallons envisioned in the 2007 Energy Independence and Security Act.

In October, BP cast further doubt over the industry when it scrapped plans for a $300 million Florida plant that would have produced 36 million gallons per year of cellulosic ethanol.

“I wouldn’t say Mascoma’s plight is anything new,” Curry said. “Other plants are two years delayed as well. There have been a lot of issues. If the industry doesn’t have more struggles in the next few years, I’ll be surprised.”

Despite those delays, Curry said a report she published in March found cellulosic ethanol could be cost-competitive with corn-based ethanol by 2016, and a Florida company this week announced it was the first in the country to begin producing cellulosic ethanol at a commercial scale.

Curry said Valero’s role in the Michigan project—particularly its agreement to buy fuel produced there—was central to the plant’s future.

“I think it’s probably quite essential,” she said. “Signing an off-take agreement is quite important. If you’re an investor, you want to see that the company has that guarantee for the next few years.”

In addition to its financial woes, the project faces opposition from environmentalists.

The Sierra Club sued to block DOE funding for the plant, claiming that an environmental assessment understated how the project’s need for woody biomass would affect surrounding forests.

“The amount of wood used for the amount of gasoline produced means there isn’t enough wood in Michigan to make a significant dent in our gasoline demand,” said Marvin Roberson, a forest ecologist with the Sierra Club.

A federal judge dismissed the suit in February, but the group is appealing the decision.

“In general, we want to do anything we can do to help out the Upper Peninsula and in particular the timber industry up there,” he said. “I don’t see the delays as being any company-specific issues. It’s more about the markets for biofuels in general.”

Andy McGlashen is a freelance journalist in East Lansing, Michigan, who has written for The Daily Climate, Environmental Health News, Great Lakes Echo and other outlets. He is a graduate of the Knight Center for Environmental Journalism at Michigan State University.