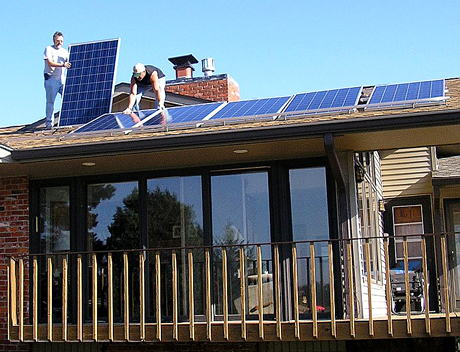 In a bid to hasten the shift from coal-fired electricity to power from locally-sourced renewables, an initiative is underway in Lincoln, Nebraska, that would make it the first city in the Midwest with a feed-in tariff, or CLEAN program.

“People want to get a dialogue started with the Lincoln Electric System [Lincoln’s municipal utility] to get more local energy developed,” said Graham Christensen, the public affairs director for the Nebraska Farmers Union.

The Union is one of the partners in Power Lincoln Locally, the coalition behind the movement. The group is holding a tour of solar installations throughout the city on Saturday.

A CLEAN contract is a commitment by a utility to purchase energy, usually generated by small-scale wind, solar or biogas sources, and to feed it into the local power grid. Contracts typically guarantee a price for 20 years.

About 18 cities nationwide have CLEAN programs. In addition, CLEAN contracts are in effect throughout six states, and have been signed by individual utilities in another 11 states, including Wisconsin and Michigan.

Lincoln Mayor Chris Beutler heard about CLEAN programs in some East Coast cities, and raised the possibility of pursuing one in Lincoln.

The Lincoln Electric System (LES) currently gets about 85 percent of its electricity from coal. Christensen said the ultimate goal of the CLEAN promoters is to shift the sources to about 70 percent solar, 20 percent wind and 10 percent biogas.

LES, which like all Nebraska utilities is owned by its customers, is looking warily at the proposal to take Lincoln’s power supply completely local and renewable.

The electric company’s chief executive officer, Kevin Wailes, said that although he’s “encouraged” by the interest of the Power Lincoln Locally coalition, he is concerned about costs.

Power Lincoln Locally hopes by late summer to bring a proposal and a budget to the LES board of directors for approval. The contract then would need the approval of the Lincoln City Council.

The transition to more renewables would begin with a solicitation for between 15 and 45 megawatts of capacity from local alternative sources, a tiny fraction of the approximately 1,000 megawatts that LES now relies on, Christensen said. The goal, he said, is to have the first CLEAN contract signed by the end of the year.

“We’re looking at getting something in place that is unlike anything in the Midwest,” Christensen said.

LES recently committed to purchasing all of the electricity from the 100 megawatt Arbuckle Mountain Wind Farm, to be built at a site in south-central Oklahoma. Wailes said the utility now gets 12 percent of its power from renewables, a figure that will grow to 23 percent once the Oklahoma wind farm is operating in 2016. That contract, he noted, is projected to save ratepayers $160 million over 20 years.

Wailes said that LES probably will seek to add to its renewable portfolio, perhaps through solar gardens or a local solar subscription service. However, he said that customers have proven “very rate-sensitive,” and that a move to renewables cannot bring with it substantially higher costs.

“That puts a burden on our customers,” Wailes said.

Increased costs are not limited to the local renewable power scenario, however. LES purchases electricity from several coal-fired plants, including the Laramie River Station in Wyoming. The utility has paid $10 million to reduce pollution from the plant, but new federal regulations could increase that cost by another $50 million. Wailes said that might increase residential bills by about 1.5 percent.

“We’re getting tired of being reliant on plants whose costs go up and up and up,” Christensen said. “We anticipate more of these costs coming. We want to be ahead of the game.”

Christensen estimates that adding up to 45 megawatts of renewable energy to the local utility’s portfolio would cost ratepayers an extra $3 a month, an estimate Wailes thinks is too low.

Whatever the accurate figure, that money would pump up the local economy, Christensen pointed out. The campaign estimates that 1,200 people would be put to work from 2014-2020 in order to build 45 megawatts of capacity. It also estimates that $137 million in revenue would come into the Lincoln economy.

“I think the people of Lincoln understand that we need to make changes, that we have to think long term,” Christensen said.