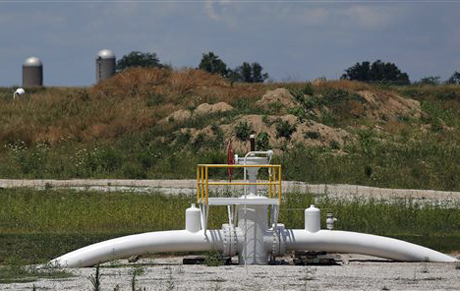 A valve extends above ground at the Enbridge Key Terminal near Salisbury, Missouri in July. The company hopes to begin construction of the Flanagan South pipeline this month. (Associated Press / Orlin Wagner)

Bulldozers have begun moving dirt to build a 600-mile pipeline across several Midwestern states that will carry crude oil from tar sands in Canada and North Dakota shale destined for refineries along the Gulf Coast.

The project, known as the Flanagan South Pipeline, has received expedited approval from three of four offices of the U.S. Army Corps of Engineers.

The project has come under some criticism because it was approved using a mechanism known as Nationwide Permit 12, which entails no public notice or public hearings.

The Sierra Club filed a lawsuit a year ago challenging the use of Nationwide 12 for the much-debated Keystone XL pipeline. They still are awaiting a decision as to whether Nationwide 12, used in the southern portion of the Keystone known as the Gulf Coast pipeline, violates the Clean Water Act and the National Environmental Policy Act.

The group claims that the Nationwide 12 permit effectively sidesteps any meaningful environmental review.

“It’s disappointing in that there was no public opportunity for comment, and there was no review under the National Environmental Policy Act,” said Doug Hayes, a Sierra Club lawyer based in Boulder, Colorado.

Hayes contends that the Flanagan project is subject to NEPA, which states that any major project requiring a federal permit must be evaluated for its impact on the environment.

The Sierra Club filed a Freedom of Information Act request in May with the Corps of Engineers, but to no avail. Then Tuesday, after learning of the Corps’ ruling, Hayes filed a lawsuit in federal district court in Washington D.C., seeking to force the Corps to provide it with documentation about the Flanagan project.

“It’s hard to speak about a project without knowing anything about it,” Hayes said. “We can’t get any basic information. We’re still completely in the dark even though we’ve been trying to get information all summer.”

Although the Corps’ Tulsa office doesn’t expect to make a decision for another couple of weeks on the southernmost portion of the route, a spokesman for Enbridge, the pipeline’s Canadian developer, said work was starting this week at four locations in Illinois, Missouri and Kansas, where the project has been okayed.

The route, which runs from Pontiac, Illinois to Cushing, Oklahoma,  has been divided into four segments, and work is starting now at the north end of each of those segments, said Kevin O’Connor, an Enbridge spokesman in Minneapolis. Enbridge intends to begin shipping crude by mid-2014, he said.

The pipeline has provoked opposition, both out of concern about potential spills and because of the use of the Nationwide 12 permit. Flanagan South would cross the Mississippi and Missouri rivers, and an estimated 2,000 other streams and wetlands.

Bryce Oates grows organic vegetables near one of those crossings, the South Grand River that runs across west-central Missouri. Oates is concerned that the pipeline carrying a mixture of thick crude oil and a diluting agent like benzene will run beneath the river less than two miles from the water intakes for two city water systems.

“The entire region’s water system is at risk from a spill,” he said.

One of the most notorious pipeline accidents in recent years involved an Enbridge pipeline that leaked more than 800,000 gallons of diluted bitumen, contaminating a creek and 35 miles of the Kalamazoo River in Michigan. Three years later, the company is still working to remove oil from sediments at the bottom of the river.

Oates said Enbridge did little to assuage his concerns at a local meeting organized by the company about three weeks ago.

“They had no answers about what they would do in case of a spill,” Oates said. “I understand that the risk is small. But these spills happen more frequently than people think.”