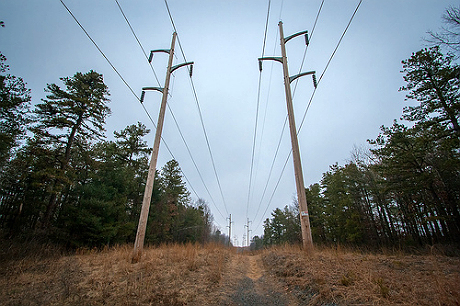 One of the main causes, according to the joint U.S.-Canada task force that investigated: the failure of FirstEnergy Corp. to adequately manage tree growth in its transmission right-of-way.

The incident — along with million-dollar-a-day fines subsequently passed by Congress — raised the stakes for tree trimming near transmission lines, and many utilities decided not to take chances.

A group of utility and conservation groups is now trying to convince the industry to give up the bulldozer approach for a more holistic one known as “integrated vegetation management.”

The Right-of-Way Stewardship Council, also known as ROW Steward, has been developing an accreditation process for utilities that meet certain environmental and community relations standards in their right-of-way management.

Instead of a one-size-cut-it-all approach, accredited utilities are expected to use selective, site-specific treatments that gradually steer vegetation toward lower-growth species.

“You create this lower-growing plant canopy that starts to shade out the tall growing trees. You get the plants that you want helping you achieve your goals,” said Philip Charlton, executive director of the Utility Arborists Association.

The method requires more time upfront in assessing and planning the site, but when successfully executed, nature eventually starts to take over much of the management.

“In the long run, you have lower costs, and at the same time you have all the environmental benefits,” such as less spraying and habitat disruption, Charlton said.

An ‘important part of the ecological fabric’

North American utilities operate approximately 160,000 miles of high-voltage transmission lines, which criss-cross the country in corridors between 100 and 300 feet wide.

“This is an important part of the ecological fabric in our country,” said Bill Toomey, forest health program director for The Nature Conservancy, one of the stewardship council’s founding members.

Well-managed transmission corridors can provide important habitat and migration paths for birds, mammals and plant species, as well as recreational green space such as bike and walking paths.

Toomey says working with the Right-of-Way Stewardship Council was a natural fit for an organization interested in the health of the nation’s forests. “These folks are touching more trees in the country than any other group.”

One potential benefit of partnering with the utility group, Toomey says, is that utility arborists could help monitor for invasive insects and diseases, one of the biggest threats to forests today.

For utilities, the group behind the accreditation program hopes it can deliver both marketing and regulatory benefits.

“I think it’s huge in terms of public relations and community. Here’s third party proof that we’re doing it the right way,” said Derek Vannice, a vice president with CN Utility Consulting, another of the council’s founding members.

Vannice, the former director of the Utility Arborists Association, also thinks utilities stand to benefit by getting ahead of regulators, which may add rules if current trends continue.

“Every utility claims to be practicing sustainable [integrated vegetation management], but many are not really doing it,” Charlton said. “ROW Steward strives to recognize those that are and educate those that are not.”

Since the 1970s, the approach had been gaining acceptance and becoming more common, but after the 2003 blackout and subsequent regulation, many utilities returned to the “wall-to-wall, everything goes” approach, Charlton said.

The difference can be stark, he said, noting a recent visit to a site where half a transmission corridor was managed by ROW Steward principles and half was not. One side was covered in trees that would require regular trimming, while the other side featured well-established shrubs, flowers and grasses, including threatened and endangered plant species — all compatible with power lines, he said.

The ROW Steward accreditation will be based on standards developed by the Electric Power Research Institute, an independent research group that gets much of its funding from utilities.

It’s currently testing its auditing process with three utilities and hopes to roll the accreditation program out more broadly after the pilot phase is completed, likely in November.