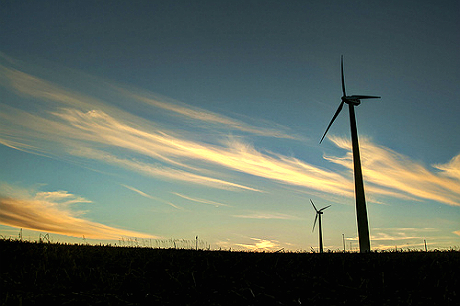 A group of Nebraska farmers are attempting to put a new face on renewable power in their state.

If they succeed in persuading a utility to buy their power, they will be the first local owner-producers in Nebraska to generate electricity with wind turbines on their land, and to sell it to a utility for distribution.

“We want to be more energy-independent,” said Graham Christensen, president of Burt County Wind. “We think these local energy opportunities are part of how we’re going to generate energy in the future.”

Wind farms are operating in Nebraska, but to date they all belong to out-of-state owners, according to Christensen, who is pursuing local ownership of renewable energy production. There are many such community-owned energy producers in neighboring Iowa, as well as in Minnesota.

“We need all of the community re-investments we can get,” said Kevin Anderson, one of the 22 farmers involved in the project. “We don’t get many big investments, so for schools and county taxes, this could be quite beneficial.”

In 2007, the Nebraska legislature passed a law defining some parameters around the development of community-based energy developments.

Burt County Wind got underway about four years ago, at the urging of Kevin Anderson. He farms outside the town of Craig, about 60 miles north of Omaha. An out-if-state developer had approached Anderson about building a wind farm on his land.

“I didn’t like that they’d take the majority of the money out-of-state,” he said. Anderson began working with Christensen, and they recruited another 21 farmers who were interested in investing in a wind project.

They created a limited liability corporation, hired consultants to measure the wind speed and determine whether any endangered or threatened species might be harmed (they wouldn’t), and tested the transmission system to determine whether it could reliably carry the additional power (it could).

Their plan calls for six turbines, to be split between two locations, that could produce 12 megawatts of power.

“We’re currently in the evaluation process,” said Tim Burk, the vice-president of customer service and public affairs for OPPD.

The district now derives 10 percent of its power from renewable sources and aims to boost that, Burk said. He’d like to purchase power from Nebraska wind farms, but he’s looking for wind power at “competitive prices.” With the federal production tax credit set to expire in 2014, he said, many wind producers are trying to expand. As a result, he said, wind energy right now is available at rather low prices.

Although power from his farmer co-op might cost more than other wind sources, Christensen says that locally-owned power pays off in other ways. The Burt County project would hire local contractors, would borrow money from a local bank, and would pay proceeds to 22 owners in the community.

“One challenge is the mindset about today’s electricity rates,” he said, adding that it’s important to take into account “other revenue streams.”

Burk said he’s not convinced that the Burt County project, as a community-owned business, would boost the local economy any more than other wind producers.

By January, Burk said he expects to make a decision about what wind source OPPD will tap.

Christensen said he is continuing discussions with OPPD and others, in the hope that one of them will see virtue in not just wind energy, but locally-owned wind energy.

“Where the power purchase agreement will come from,” he said, “nobody knows.”