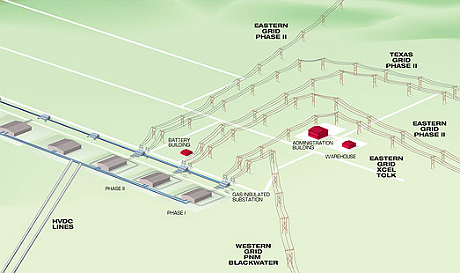 This Balkanized power grid, however, appears to be on the verge of breaking open, with the result that at least some electrons will be free to flow as the market dictates. And that could have particularly positive implications for generators of renewable power.

“This is a ground-breaking project,” said Russ Stidolph, senior vice president and chief financial officer of Tres Amigas, a company that aims to unite the three grids. The project, which has the same name, will be constructed near Clovis, New Mexico, where the interconnections come close to converging.

The developers are seeking $550 million to fund the first phase, which Stidolph said the company expects to begin building by the end of December. The first phase would allow 750 megawatts to move between the eastern and western grids (by way of comparison, the average coal-fired power plant in the U.S. can generate about 550 megawatts). The Tres Amigas developers envision a second phase that would establish a connection between the eastern grid and the Texas grid, allowing for the movement of 1,500 megawatts.

“There’s significant demand for transfer among the three grids,” Stidolph said. His company envisions an interconnection that continues to grow along with demand for the capacity to move electricity from one grid to another.

The power transmission system in the U.S. was built to accommodate a very local electricity market, in which power was sold to customers located nearby. Tres Amigas will help to enlarge the electricity market, which should help to make power more reliable and cheaper, and to enhance the movement of renewable energy.

“We think this holds great promise for delivering some of the best winds in the country to other parts of the country,” said Pat Pelstring, president and chief operating officer of National Renewable Solutions, a Wayzata, Minnesota-based developer of wind farms.

Pelstring’s company is developing a wind farm in New Mexico, close by the planned interconnect. He expects by the end of this year to complete the first phase, which will generate 20 megawatts. But National Energy Solutions is leasing 86,000 acres that straddle the border between New Mexico and Texas, where Pelstring thinks he can generate between 500 and 600 megawatts of power. Then, at least theoretically, he could send it almost anywhere in the country.

Five or six years ago, according to Pelstring, power usually was sold within 200 miles of where it was generated.

“Now,” he said, “we’re looking at opportunities to deliver power as far west as California. It has the largest renewable-energy appetite in the country.” An electrical pipeline from New Mexico to California “would be the optimal situation for us,” he said.

It’s not likely, Pelstring said. He’d have to pay several transmission companies to get it there, which would be cost-prohibitive.

Moving power long distances can get complicated and expensive, but it can still pay off, according to James Hoecker, counsel for the transmission industry group WIRES.

“It depends on the economics of the particular transaction,” he said, and pointed out that the power company that serves Lincoln, Nebraska recently signed a contract to purchase 100 megawatts of power from a wind farm in Oklahoma.

Tres Amigas may enable some more regional shifts in power, said Scott Feuerborn, a principal at the Kansas City-based engineering firm Burns & McDonnell. He is working on the project.

“The wind in Kansas may be producing at different times than the wind in Texas,” he said. Tres Amigas may “allow us to take advantage of that diversity in the weather.”

When it comes to moving electricity around, one basic law of economics applies: the more cheaply you can generate electricity, the further you can afford to move it, Pelstring explained.

And in windblown Texas, Stidolph said, “Historically, there have been periods of the year when they have negative power prices. They have to pay people to take it. There’s a significant amount of renewable power in the Texas panhandle that is trapped.”

Once the pipeline to the east and west opens up, the generators of that power will be able to afford to pay relatively high prices to move it a long distance to the people who need it.

Throughout the wind tunnel that runs from Texas up to the Canadian border, Hoecker said, “It’s not that radical to think that some of that market will go through Clovis, New Mexico. It will depend heavily on the availability of other transmission resources.”

Although Tres Amigas will create a new opportunity to exchange power between the east, the west, and the Lone Star State, it’s a fact that most of that power will need to move on either end through a transmission system that, to quote Hoecker, is “aging, somewhat congested, and not adequate where there is a lot of renewable energy.”

Tres Amigas will open up more possibilities, he said, but many more improvements in the nation’s transmission system are necessary to smoothly and efficiently move electricity, especially that generated by the wind or the sun, a long ways to market.