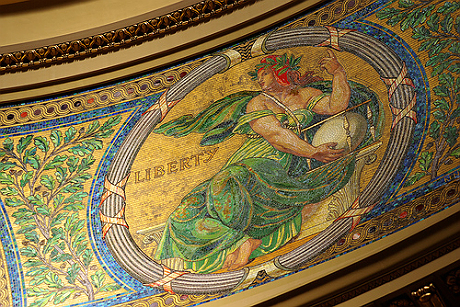 The Liberty mural inside the Wisconsin state capitol in Madison. (Photo by JonU235 via Creative Commons)

A group of conservative Tea Party activists in Atlanta turned heads this summer when they announced a partnership with the local Sierra Club chapter to help pressure Georgia’s largest electric utility to boost its investment in solar power.

“Most of us don’t trust the environmental movement because they’ve cried wolf forever and ever. There are all kinds of philosophical disagreements, but at the end of the day this was pretty much a no-brainer,” said Paul Ehlers, state party chair.

The proposal they endorsed would clarify state law to allow leasing and other types of third-party ownership for solar panels, wind turbines and other generators, in which neither the electric customer nor their local utility owns the system.

The Libertarian Party has no elected state legislators in Wisconsin, but it does have influence with a certain subset of the Republican Party, which currently controls the state’s government. The Libertarians’ stamp of approval could help change the long-polarized debate about distributed generation in the state.

“We have some credibility now. We can talk to Republican legislators in a way we couldn’t in the past,” said Michael Vickerman, program and policy director for RENEW Wisconsin, which is leading the Clean Energy Choice campaign.

Vickerman began contacting members of the Libertarian Party’s state executive committee in July after reading about the Tea Party developments in Georgia. (Wisconsin’s Tea Party was dismissed as potential clean energy ally because of its strong ties to the Koch-funded Americans for Prosperity group.)

“What we’re proposing doesn’t involve a new mandate or an extension of existing mandates. It’s not in any way related to existing or future subsidies. It’s not an intrusion in the marketplace. It’s actually a liberation of the marketplace. So we felt this issue should fit in their wheelhouse,” Vickerman said.

He eventually heard back from a receptive ear in Ehlers, the state’s party chair. Ehlers teaches geography and geology at a technical college in Rhinelander. Unlike many in his party, he says, he believes humans are causing global warming.

“I’m not convinced it’s the end of the world, like some people are, but I think it’s pretty clear that we are having an impact on the atmosphere,” Ehlers said.

Ehlers took the proposal to the party’s executive committee.

“I said let’s just look at this on the merits. This is not about global warming. It’s really the first step in deregulation of the utilities. More important, it reaffirms private property rights. We should all be in favor of that,” Ehlers said. “It’s really no different than a satellite dish company providing you with a satellite dish so that I can watch TV channels that I can’t get through my local marketplace.”

The existence of state and federal subsidies for renewable energy was a sticking point in the committee’s debate.

Eventually, the committee voted 6-1 to approve a carefully worded endorsement that supports a property owner’s right to buy and generate on-site power, regardless of whether a regulated public utility is involved in the process:

“On the matter of public utilities and their definitions, the Libertarian Party of Wisconsin recognizes that existing definitions and regulations can swiftly become obsolete as new technologies and service innovations come into existence. From our understanding, the Clean Energy Choice initiative seeks to clarify the legal status of contracts where a property owner grants an easement to a private company to build a small power station on their property. The LPWI is committed to the idea of free contract: individuals can do as they wish with their property provided they do not trespass on others. The LPWI encourages contracts among property owners, small on-site power providers and large off-site power providers, geared to their individual best interest as they define it without interference or distortion from government entities.”

The statement also disapproves of tax credits for renewables:

“While it is unfortunate that federal tax credits are a major impetus to the marketability of third party financing of renewable energy systems on a customer’s premises, this initiative is about choice.  Any initiative that increases choice by definition increases liberty.”

The Clean Energy Choice campaign’s growing list of sponsors includes environmental groups, energy contractors, and a handful of cities and counties. It has yet to secure a bill sponsor. Vickerman said they will continue seeking more endorsements, particularly from cities, counties, school districts, and large companies.

“We need to go out and show legislators that support for this policy is broad and that it doesn’t align itself easily with the partisan divide that prevails in this state,” Vickerman said. “At some point we want to be able to demonstrate to legislative leadership that they ignore this popular desire at their peril, and that the time is here to introduce legislation to expressly authorize third-party contracts for clean energy.”

Vickerman said he anticipates a legislative hearing on the issue later this year and hopes to see a bill introduced before the end of the session in March 2014.

While libertarianism and conservatism are different ideologies, Ehlers said the third-party proposal in Wisconsin would be a win for deregulation, the free marketplace and property rights — all things conservatives traditionally support.

“I would say when you look at the proposal and you don’t have a knee jerk reaction to it,” Ehlers said, “I think the right will embrace it because it really is none of the government’s business where I get my energy from.”