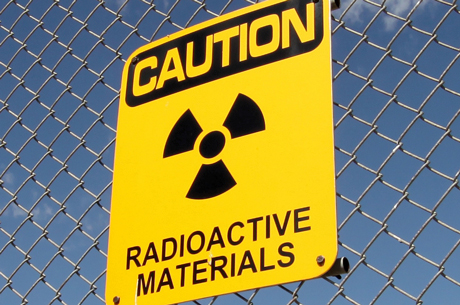 The research raises questions about future disposal on both sides of the border as radioactive waste continues to sit at power plants around the Great Lakes.

Ontario Power Generation is planning an underground disposal site for low and intermediate level nuclear waste at Kincardine on the Bruce Peninsula in western Ontario. The categories include most things in the United States’ classifications for low-level radioactive waste. For power plants, that includes things like contaminated equipment, clothing, protective gear, and cleaning supplies, as well as filters and reactor water treatment residues.

Starting on September 16, the Canadian government’s joint review panel will hold a public hearing on the project’s environmental assessment. Construction could start within two years, says a timetable on the Canadian Nuclear Safety Commission’s website.

Opposition focuses on the site’s location less than a mile from the Great Lakes, which hold 21 percent of the world’s fresh surface water. More than 35 million people rely on the lakes for drinking water.

Meanwhile, the United States is producing growing quantities of its own radioactive wastes. No current plans call for underground disposal in the United States Midwest. Nonetheless, layers involved in the Bruce disposal site extend under several Midwest states.

Geologically speaking, both layers are part of the Michigan Basin. The bowl-shaped, multi-layered region is centered in central Michigan. The region’s layers extend into Canada, Wisconsin, Illinois, Indiana, and Ohio.

A scientific team, led by University of Ottawa geologist Ian Clark, analyzed core samples to see how likely the limestone and shale are to let water flow through.

“If the groundwater isn’t moving, then there’s really no way for the waste to escape,” says University of New Brunswick geologist Tom Al, who worked on the study.

The team’s conclusion, published in the journal Geology, is that any contaminated groundwater would have very little chance of escaping through the rock.

“We found that the shale and limestone package together are an incredible barrier,” says Clark.  “Below and above, nothing has penetrated into that zone for these many hundreds of millions of years.”

“This rock material, it’s almost like a steel plate,” agrees Al. “There is no permeability of any kind.” The rock has few pores that can hold water, and those pores are poorly connected.

In geology terms, the limestone and shale layers date back to the Ordovician Period. That era was 490 million to 443 million years ago.

“These waters have been there since before the dinosaurs roamed the earth,” observes Clark.

Geologist Christopher Neuzil of the United States Geological Survey reviewed a draft of the research by Clark’s team. He has also done his own research on the Bruce site, which is currently under review.

Neuzil interprets his data to mean that there’s negative pressure at the Bruce site. If so, that’s another reason why contaminated water wouldn’t escape.

Basically, past glaciers squished down all the layers beneath them. When the glaciers melted, “the rock wanted to expand back a little bit,” says Neuzil. To the extent any water can flow, it’s probably moving in, not out.

“Very, very slowly, water is being drawn into it,” says Neuzil. “It’s on the order of centimeters per thousand years.” And, he adds, it doesn’t look like the pressures will balance out for another five or ten thousand years.

Neuzil’s estimates of the rocks’ permeability are “very similar to the values” that Clark’s team found. That suggests the rocks are impermeable over the whole disposal area, says Neuzil, and not just near the boreholes.

Writing separately in the journal Eos, Neuzil has also suggested that shales and other clay-rich rocks could safely host U.S. nuclear waste.

“In many cases we can demonstrate, there’s strong indications that they don’t have any fractures that haven’t been detected,” explains Neuzil. Thus, in building an underground facility, “you won’t run into that kind of surprise.”

The Canadian findings are reminiscent of a 2011 report from the Sandia National Laboratory, which identified geologically stable granite deposits in Great Lakes states as a possible candidate for nuclear waste storage.

The Sandia report dealt with crystalline granite, which differs from non-crystalline shale in important respects.

Currently, such wastes go to either EnergySolutions Clive Operations in Utah or Waste Control Specialists near Andrews, Texas.

“They have plenty of room at both sites for their potential customers,” says MCC Commissioner Stanley York.

The MCC’s original goal in the 1980s was to find a disposal site for low-level radioactive waste within the Midwest. Michigan had the most nuclear power plants, but it didn’t want any wastes from other states. Thus, Michigan withdrew from the Compact. That left Ohio, Indiana, Iowa, Minnesota, Missouri, and Wisconsin.

Ohio began doing preliminary studies. Then MCC called a halt to the process.

“We did some more financial analysis and came to the conclusion that the cost of building a site would be much higher than our generators could afford to pay us,” explains York. “And so we stopped Ohio in its tracks.”

The threat of litigation played a big part in that analysis. Lawsuits get “very expensive,” says York. And potential lawsuits remain a risk for any site that might be proposed today.

“The economics did not change,” says York. “And so we presently are not developing a site.”

Meanwhile, high-level radioactive waste sits at sites around the Great Lakes and across the country.

Current power plant practice is first to store the waste in large pools covered by 20 to 25 feet of water. Power plants keep the pool water around 90 to 100 degrees Fahrenheit. The water draws thermal heat from the waste. The deep water also keeps radiation levels around the pool within regulatory levels.

After five years or more, the waste is cool enough for dry storage. Plants move the waste from the pool into steel canisters or casks. Plant personnel remove any water, add helium to prevent corrosion, and put the containers on storage pads next to the reactors. Some types of containers get a vented concrete overpack as well.

EPRI is currently working with the Department of Energy to collect and analyze data on long-term performance of high-level radioactive waste storage systems. Original plant licenses anticipated storage for 20 years. The NRC has since moved to allow storage for 40 or 60 years, says Kessler.

Despite such assurances, groups like the International Institute of Concern for Public Health worry. In May that group, together with Great Lakes United, released the Great Lakes Nuclear Hot Spots Map.

Among other things, the map shows 38 nuclear power plants operating in the Great Lakes region. Some are just a mile or less from the Great Lakes, including Wisconsin’s Point Beach Nuclear Plant on Lake Michigan and Ohio’s Davis-Besse Nuclear Power Station.

For more than two decades, Nevada’s Yucca Mountain site was the only high-level disposal site given serious consideration. The Nuclear Regulatory Commission halted review of the site’s license application in 2010. By then, more than $10 billion had been spent evaluating Yucca Mountain.

On August 13, a federal appeals court ordered the Nuclear Regulatory Commission to resume the license review. The law says the Commission shall make a final decision within three years, and that did not happen, reasoned the court.

As a practical matter, only about $11 million of review funding remains. Dissenting judge Merrick Garland called that amount “wholly insufficient to complete the processing of the application.” Thus, Yucca Mountain is unlikely to have a license anytime soon.

Nonetheless, a 2012 report for the Blue Ribbon Commission on America’s Nuclear Future has renewed interest in permanent underground disposal of high-level radioactive wastes.

“Ultimately I think there’s pretty much a consensus that underground is where it has to go,” agrees Neuzil.

In light of that, could shale and limestone layers like those on the Bruce Peninsula contain high level waste as well?

“One could argue that these strata in this region would be ideal for high level wastes,” says Clark.

“There are lots of different types of geologies—rock types, if you will—that could support and host a disposal facility,” notes Kessler. “Some of the rock types exist in the Midwest and all kinds of different places.”

However, geology isn’t the only factor to consider.

“Geology is part of the issue, but then designing the rest of the system to fit with that geology is another major part of that whole equation,” stresses Kessler.

Such issues will likely be raised at this month’s hearing and afterward as Canadian authorities continue their review of Ontario Power’s proposed disposal site at Kincardine.

What will ultimately happen to the United States’ high-level waste remains an open question.

Meanwhile, Clark, Al, Neuzil and others say the geology research is important in its own right.

“Now we’ve got a window in time,” says Clark. “It’s a window on geological time when life was just starting on land and this was an inland sea.”