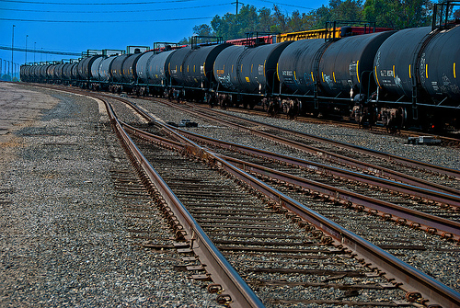 As U.S. regulators and Canadian investigators home in on the calamitous July derailment of a 73-car oil train in Quebec, one question lingers, fraught with consequences for crude shippers: Did the contents of the rail cars fuel the disaster’s intense explosion and fire?

If the Bakken crude that slammed into the small town of Lac-Mégantic is linked to the severity of the resulting damage, the shale oil boom could face stricter transportation regulations and the public-relations black eye of a tie to the crash that killed at least 47 people. But some experts in oil production and transportation see little out of the ordinary about the ignition of crude not treated as explosive, given the friction and speed of the freight train that jumped the tracks.

“Oil, even at very low pressures … still has some natural gas dissolved in it, and that gas will try to form a gaseous state every time there’s a pressure drop,” University of Texas, Austin, petroleum engineering professor Paul Bommer said in an interview.

Loading the ill-fated crude into tank cars that rode the Montreal, Maine and Atlantic Railway Ltd. to Lac-Mégantic likely caused a small pressure drop, Bommer added, leaving room for “a fairly minor gaseous phase” to remain. “And gas, we all know, is extremely combustible.”

The Federal Railroad Administration warned the oil industry three weeks after the derailment that it had concerns about widespread misclassification of crude on the tracks as well as the potential for chemicals used in hydraulic fracturing to corrode rail cars used for shipping oil.

The agency’s “Bakken blitz” investigation into crude shipments, set against the slower-moving process of tightening rules for train operators, is setting the stage for an oil-versus-rail battle over which sector bears primary responsibility for preventing future accidents (EnergyWire, Sept. 3).

Pipeline and Hazardous Materials Safety Administration chief Cynthia Quarterman emphasized the classification aspects of the “blitz” in a Wednesday blog post that described her agency and FRA as “laser focused on the energy boom epicenter” of the Bakken.

“Today, our railways move more hazardous materials than ever before,” Quarterman wrote on the Transportation Department’s website. “DOT will continue to enforce safety regulations — and revise them if necessary — to protect our communities and the environment.”

Among PHMSA’s nine classes of hazardous materials, “most forms” of crude fall under Class 3, FRA wrote in a recent emergency order that called on rail operators to develop plans for more reliably securing parked trains to the tracks. Class 3 materials can belong to one of three so-called packing groups under federal regulations, depending on their flashpoints, or the lowest temperatures required to create the potential for ignitable vapors.

The oil that spilled in Lac-Mégantic “was shipped as a Class 3, Packing Group 3 flammable liquid,” the lead Canadian investigator of the disaster told Reuters last month.

It remains unclear, however, whether shipping the Bakken crude as a higher packing group would have changed the handling standards used by the now-bankrupt railroad at the center of the disaster. Class 2 is typically reserved for gases, and even more highly flammable liquids such as gasoline remain in Class 3.

“I wouldn’t be any more concerned about a tank of Bakken oil versus a tank of gasoline,” University of North Dakota Energy & Environmental Research Center Associate Director John Harju said in an interview, though he affirmed that “Bakken oil is more volatile than heavy crude” and likened its handling to some of the lighter, liquid condensate produced alongside natural gas.

Mohamed Soliman, chairman of the petroleum engineering department at Texas Tech University and a former longtime employee at Halliburton Co., echoed that assessment. “Shale requires better handling than crude oil that is very heavy because it burns easier,” he said in an interview.

Shale oil’s light nature can stem in part from the higher proportion of natural gas hydrocarbons such as pentane, butane and ethane that are often produced during its extraction from underground rock formations. These condensate liquids, which fetch their own price on the market, are extracted to some degree during the separation process that shale oil undergoes before shipment, but their presence could have left a mark on the resulting product that provided the spark needed to burst into quick flame in Quebec.

It is this possible “natural gas dissolved” in the oil at issue that Bommer linked to the volatile nature of the Lac-Mégantic explosion. The prospect that hydrogen sulfide might have played a role in the fires, however, was met with dismissal from Bommer and Harju, who co-authored a 2011 study for the Society of Petroleum Engineers that traced a brief uptick in the sulfurous “souring” of Bakken reservoirs to insufficient fluid disinfection at well sites.

“Looking at Bakken crude as somehow the cause or some extremely different factor in severity of this fire and so on, I think, is silly,” Harju said, also a member of the group that advises the Department of Energy on unconventional fossil-fuel technology.

“It was a tragic accident that points more at rail handling than at the contents of the cars. If it was gasoline, they wouldn’t be asking, ‘Was this a special type of gasoline?'”