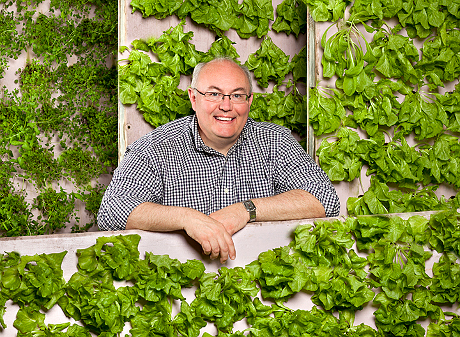 Skyscraper farming has been a thing of futurists’ fascination in recent years.

As the world becomes more urban and crowded and a host of environmental challenges put more pressure on existing crop land, it’s intuitive that indoor farming might someday play a bigger role in feeding city populations.

On the ground, though, energy demands and real-estate realities have been consistent barriers.

A Minnesota start-up company is sprouting past these obstacles, though, with a compact, energy-efficient design it thinks could be a new model for urban farming.

Garden Fresh Farms is a finalist in the Minnesota Cup, an annual entrepreneurial competition that will announce its 2013 winner at an event Wednesday.

The circle of light

Dave Roeser and his wife, D.J., co-founded the company in 2010 in a suburban warehouse that was left vacant after he sold two small businesses.

Since last year, the couple, along with their biologist son, Bryan Roeser, have been growing basil, lettuce and other leafy veggies in an indoor aquaponics system that also annually produces tens of thousands of trout and tilapia for fish markets.

Aquaponics is an ancient farming method in which plants and fish are raised in a symbiotic environment. Fish waste contains ammonia, which is broken down by bacteria into nitrates, which is consumed as fertilizer by the plants, which cleans the water for the fish — all in one closed-loop system.

Garden Fresh Farms’ innovation: the orbiting garden, a system of hollow, steamroller-sized cylinders with an axle of light down the center that gives basil and other plants precisely the right amount of growing light while wasting precious few lumens.

“With lighting, every foot that you drop you lose 75 percent of the value of the light,” says Roeser. In other words, the farther the light source from the plants, the more intense it needs to be in order for enough photons to reach the plants.

“What we do is put the light within inches of the top canopy of the product that’s growing, no matter what stage of development it’s in,” says Roeser. “If it’s a two-inch seedling or a 16-inch, almost fully grown basil plant, the lightbulb is going to be just a couple inches from the top. What that means is we use a lot less light because we’re not losing it because of distance.”

Garden Fresh Farms has also developed a vertical, light-efficient system for growing lettuce, oregano, watercress and other greens. Its “lettuce factory” and the orbiting basil garden both allow for highly compact farming — in a one-acre building it can grow as many plants as a 100-acre outdoor farm, Roeser says.

That’s important because urban real estate is generally much more expensive than agricultural land. That’s one of the reasons Roeser sees skyscraper farming as less feasible, along with the added energy requirements for transporting equipment and materials up and down within a building.

“The skyscraper thing is kind of fun. It gets people thinking,” he says. “We saw that it didn’t make economic sense. It was way too much energy growing that way.”

Instead, this company’s model focuses on converting large, flat vacant buildings into urban farms. Garden Fresh Farms’ first location in Maplewood doesn’t compete for space with office or retail in denser, downtown areas, but the inner-ring St. Paul suburb is also close enough to customers to cut down on transportation costs.

The bill for lighting its indoor farm is sizable, but it uses far less fuel for transportation, especially compared to what gets imported over winter. Its crops are hand harvested. There’s no running of tractors or other large farm equipment, and there’s no chemical fertilizer, many of which are made from petroleum products.

Roeser says the energy cost at its Maplewood farm is less than a nickel per plant. “If you look at that total transportation cost, pennies per plant is really cheap.”

Roeser sees potential to lower the farm’s energy footprint further by switching from metal halide lighting to LEDs. Currently available LEDs don’t spread light as well as other bulbs, meaning they’d need more fixtures, making them cost-prohibitive, he says. But they’re working with the University of Minnesota and an LED manufacturer on a research project to try to solve that problem.

Garden Fresh Farms’ plants actually get some of their light from the sun, but indirectly. The building’s rooftop features 44 solar panels made by Minnesota-based tenKsolar that produce an average of 12,500 kWh of electricity per year.

Garden Fresh Farms has been able to match the price of organic competitors from Mexico or California. So far it’s supplied CSAs, restaurants and dining halls with its greens. The company has sold its fish whole and direct to customers, who come with buckets on periodic fish market days.

Garden Fresh Farms is expanding with the first of what Roeser hopes will be many investor-owned farms using its equipment. The second location is being built in St. Paul in close proximity to food distributors. Investors hope they will be able to harvest one day and have their product in stores and restaurants the next day.

Roeser has ambition to continue that franchise-like growth, in which investors buy the equipment and name from Garden Fresh Farms, and perhaps also hire it to run the farm as well. He sees potential to be a national or even global brand for fresh greens.

“What we see is that we’re almost like what McDonalds was in 1955,” says Roeser.

The company is one of six finalists for the Minnesota Cup award, which comes with a $40,000 grand prize. It already won the energy and clean tech division.