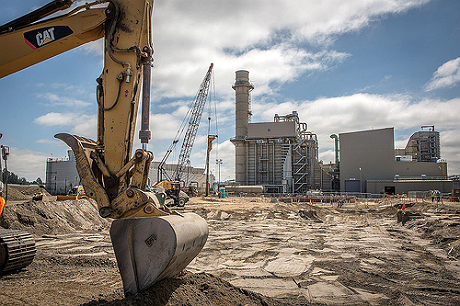 Construction of a new natural gas power plant in Oregon. (Photo by PGE via Creative Commons)

The unprecedented boom in natural gas production from places like Pennsylvania, New York and Ohio should make those densely populated regions self-sufficient in gas production by 2020, which in turn could encourage more electric utility fuel switching, according to two top energy sector analysts with Navigant Research.

But utilities will still face a difficult set of questions when charting the future of power generation, including whether to invest billions of dollars in environmental controls at existing power plants, replace aging coal-fired units with cleaner-burning natural gas generators or meet future electricity demand using other technologies.

A fundamental question underscoring all of these decisions, according to Rick Smead, a director for Navigant’s energy practice, is whether the gas boom, now in its fifth year, will continue into the middle and latter half of the decade, when a series of new federal regulations targeting coal plant pollutants comes into full force.

“If you can’t build any new coal plants, that tends to work in favor of gas,” said Smead, who specializes in upstream and midstream natural gas issues at Navigant’s Houston office.

But utility and investor enthusiasm for gas will likely rise and fall with gas prices, which have traditionally been more volatile than prices for coal. Many analysts agree that the 2012 bottoming out of gas prices is not a long-term trend and that rising demand for gas, coupled with the possibility of new export markets, will drive prices higher in the coming years, helping coal to regain some of its lost market share.

Gordon Pickering, a Navigant energy practice director in Sacramento, California, noted that power producers consumed 36 percent of all domestically produced natural gas between June 2012 and May 2013, riding a wave of low prices that moderated only slightly last winter. Natural gas also ranks first among fuels for power generation, accounting for 39 percent of all U.S. generation, while the share coming from coal plants hovers at about 30 percent.

But for gas to retain and even grow its market share, experts say natural gas providers, pipeline owners and power producers will need to address a number of issues. These include an underdeveloped distribution network for gas deliveries to utilities, the need to shift pipelines to account for a new supply-and-demand landscape and for electric utilities to fully embrace gas as an alternative to coal.

“In terms of converting to gas, or becoming more reliant on gas, utility and reliability mangers tend to get nervous,” Pickering said. “They’re not used to having a just-in-time generation fuel [like gas]. They’re used to looking out and seeing a big pile of coal out the window.”

The Navigant analysis, presented in an online webinar, is the latest in a growing body of expert opinion on the shifting roles of coal and natural gas in power generation.

Last week, SNL Energy noted in a research brief that coal plant retirements soared in 2012, when 8,800 megawatts of coal-fired generation capacity was taken offline, while an additional 5,781 MW is scheduled for retirement by the end of 2013.

At the same time, SNL Energy noted that utilities are planning to convert as much as 7,000 MW of coal-fired generators to burn other fuels, including natural gas and biomass, with “the vast majority of proposed coal conversions” coming between 2014 and 2016.

“With a 2015 deadline looming for compliance with the U.S. EPA’s Mercury and Air Toxics Standards, U.S. power generators are continuing to refine their plans for noncompliant coal units, albeit in relatively slow and methodical fashion,” SNL’s Michael Niven and Neil Powell wrote.

Navigant’s Smead stressed that coal-fired power generation is not at risk of disappearing, but it will represent a significantly smaller share of total power generation as economic, regulatory and other pressures mount.