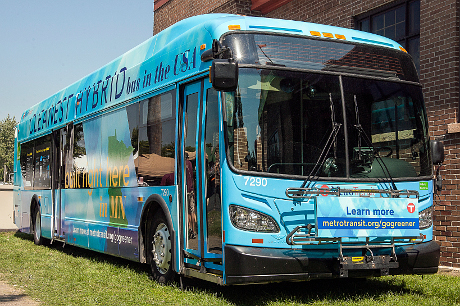 While hybrid drivetrains have led to significant fuel economy gains for cars, it’s not necessarily the same equation for a city bus.

A typical bus gets only between four and six miles per gallon. About half of that fuel is never used to put the bus in motion.

Instead, that energy is gobbled up powering other equipment, namely systems to cool the engine and keep a window-lined interior the size of a small studio apartment at a comfortable temperature.

A year ago, two of the world’s most advanced “super hybrid” transit buses hit the road in the Twin Cities, and have beaten conventional buses on fuel economy by about 35 percent. But little is understood about how and where those benefits accrue. How much savings, for example, is due to the advanced engines versus battery-powered cooling fans?

The answers to such questions could help transit agencies identify the most cost-effective upgrades for their fleets.

‘Where all the energy goes’

Kittelson is working with Metro Transit, which serves the Minneapolis-St. Paul region, to map the energy consumption of various conventional, hybrid and advanced hybrid buses in order to see precisely where savings are achieved.

“Our project really is to see where all the energy goes in propelling a bus,” Kittelson said.

One hypothesis: bus manufacturers could achieve significant fuel savings at a much lower cost than full hybrids by powering cooling fans, air conditioning, and other accessories with separate batteries.

Kittelson has concluded that running those systems off electric batteries has potential to improve fuel economy up to 15 percent at a cost of around $20,000 per bus. Advanced hybrids might achieve double the efficiency but at ten times the cost, he said.

The comparisons become more complicated when traffic, weather, and other factors are considered. On a route with heavy start-stop traffic, a hybrid might far outperform a conventional bus with electric accessories, for example, while the gap between the two buses might narrow on routes with higher speeds and less congestion.

Kittelson’s goal: to come up with a model that will let transit authorities compare all of these variables.

“At the end of the day, they’ll have much better tools for making purchase and deployment decisions,” Kittelson said.

Metro Transit purchased its advanced hybrid buses last year with a $1.2 million federal grant that covered 80 percent of the cost. The buses were manufactured by New Flyer with components from BAE, Thermo King and Cummins.

Kittelson’s project will compare the energy use of conventional buses, as well as both types of hybrids. Multiple buses have been equipped with instruments that will measure fuel use, along with variables such as speed, weather, and passenger load.

The research team is developing a website where they hope to be able to livestream data from the buses as they perform their normal routes. The tools they come up with will be publicly available for any transit organizations to use.

If every bus purchased can’t be an all-equipped, top-of-the-line fuel saver, which upgrades offer the most value?

They’re also looking forward to information about which types of buses are best suited for different types of routes.

The future is electric

Wurzinger predicts all-electric bus fleets in the future, but until then, transit agencies still have a variety of bus types to deploy and a variety of fuel-saving technologies to choose from when buying new buses.

One where the jury is still out at Metro Transit is electric air conditioning. Air conditioning is one of the big draws on bus engines that lowers fuel economy. Powering AC from a separate battery improves performance, but how much and at what cost?

“The potential gains are lower in our climate with an electrified air conditioning system than they might be in other transit properties,” Wurzinger said. “From our point of view in the Midwest, I don’t know that we’d ever recover the cost.”

Climate is one example why the most efficient bus is likely to vary depending on the specific use.

“We’re looking at coming up with modeling and design tools to help companies like Metro Transit optimally schedule their buses to the right routes,” Kittelson said, “and when it comes time to buying new buses, they’ll have the tools to be able to select appropriate accessories to give them the most cost-effective combination.”

The research project started in January and is expected to be completed by the end of 2014.